Which source DC comics does this page (featuring the Batcave Frank Springer 1968 white/red-shaded version Repost for Batcave Batman #203) come from?

What is the source of the image below? 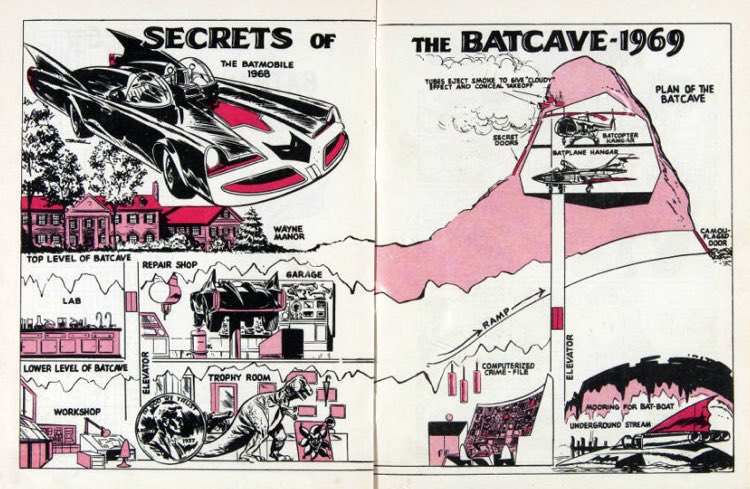 Other similar versions of this picture have been published over the years: 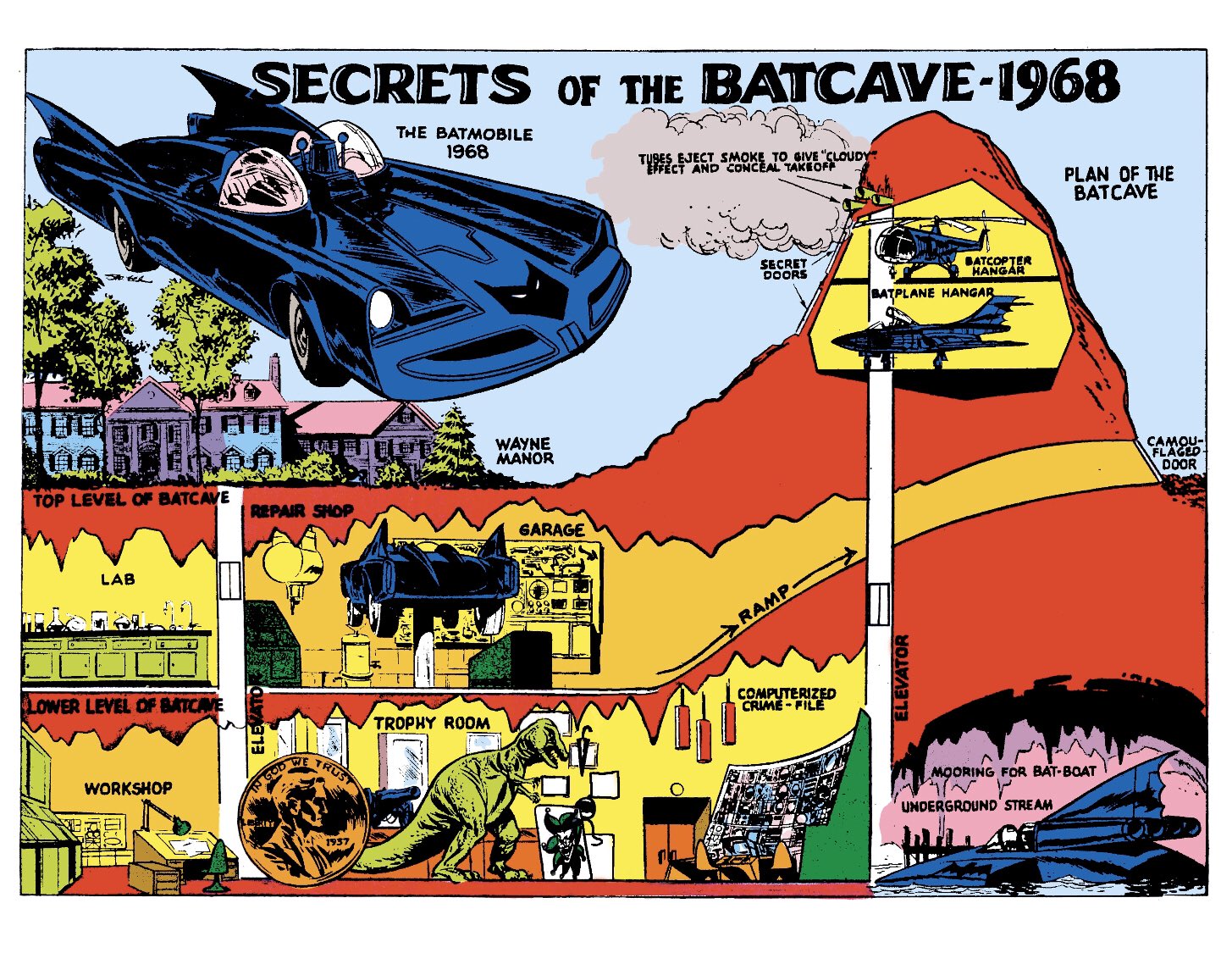 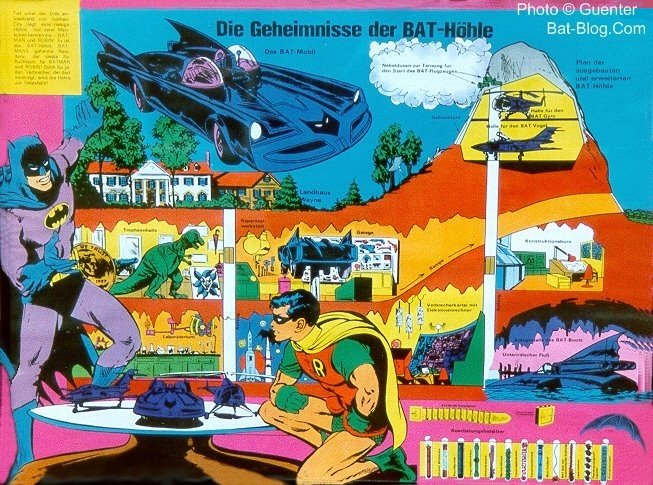 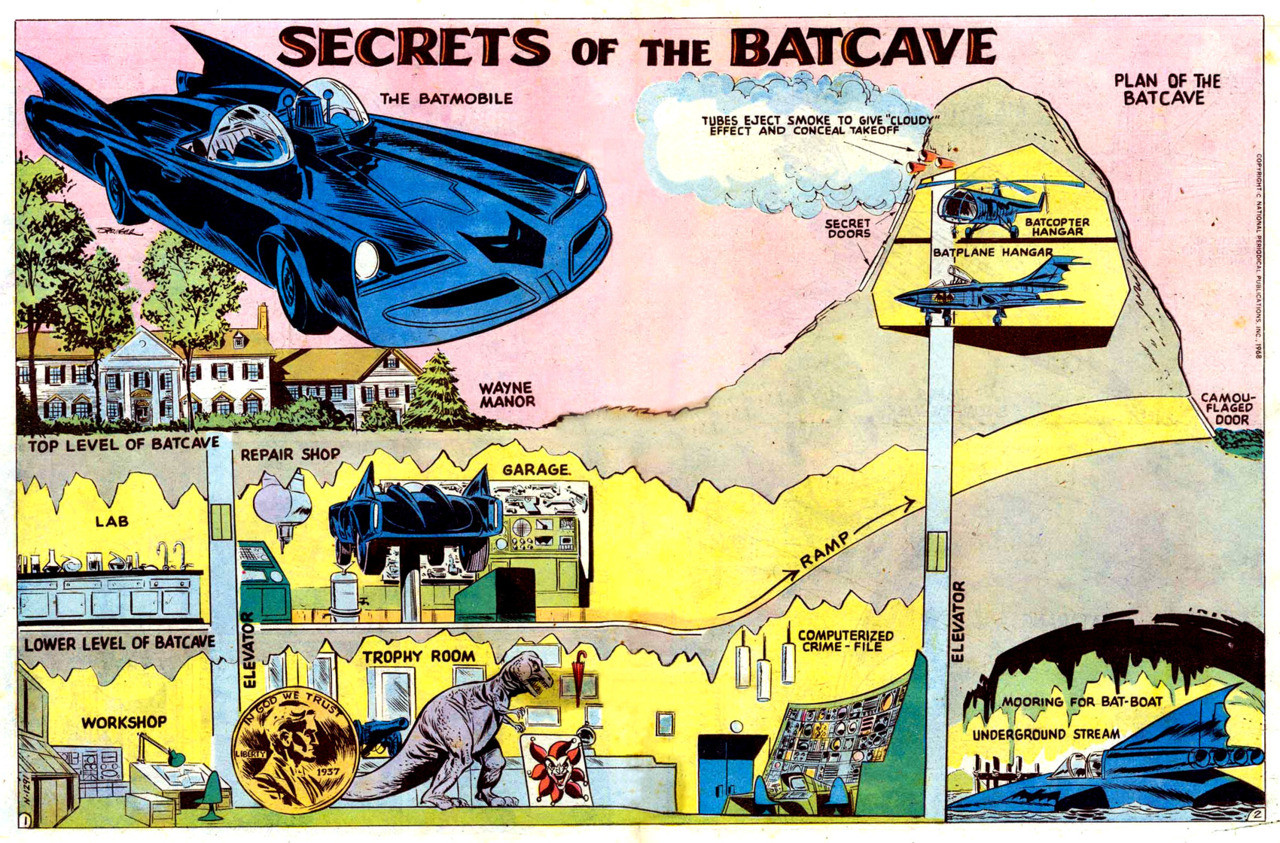 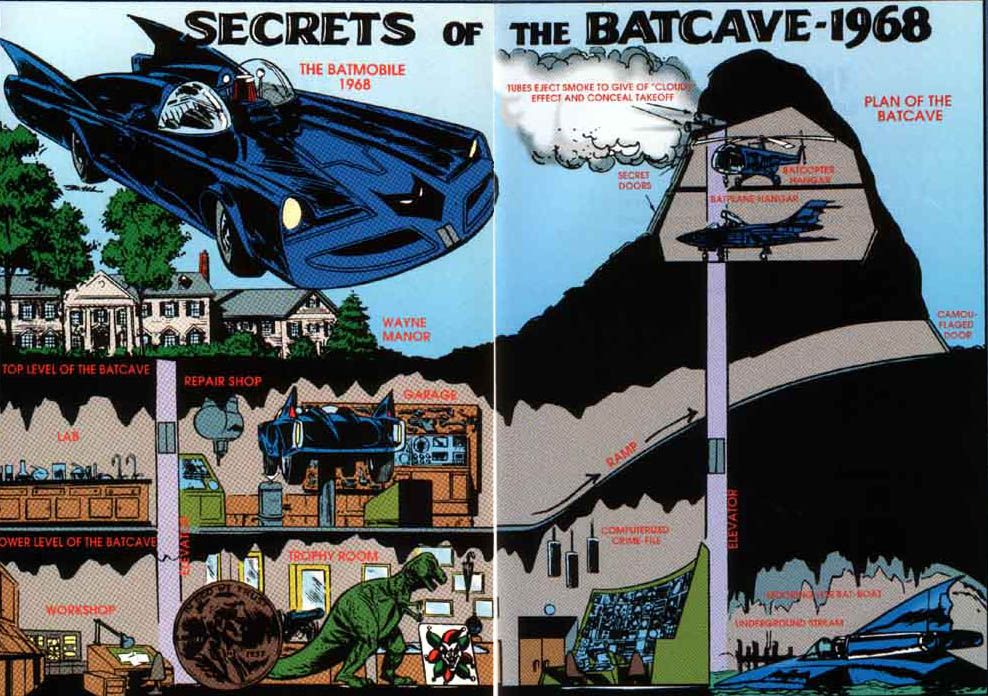 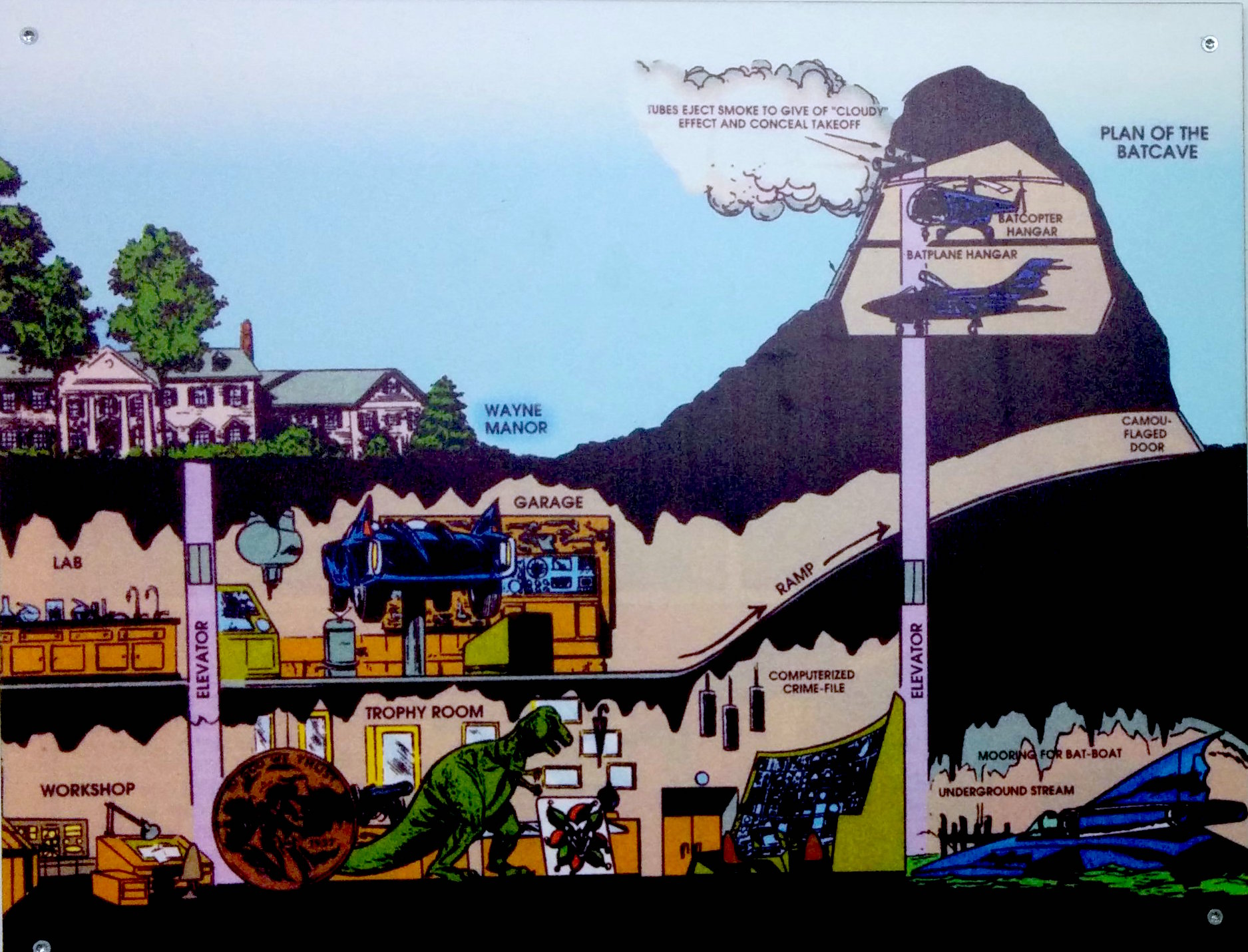 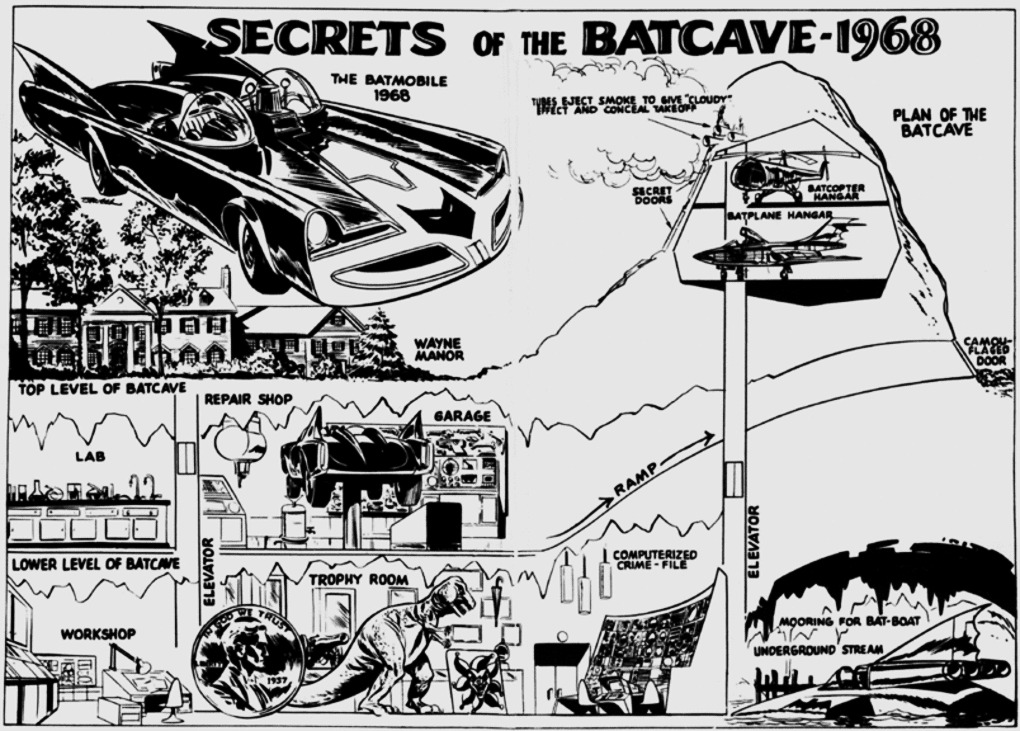 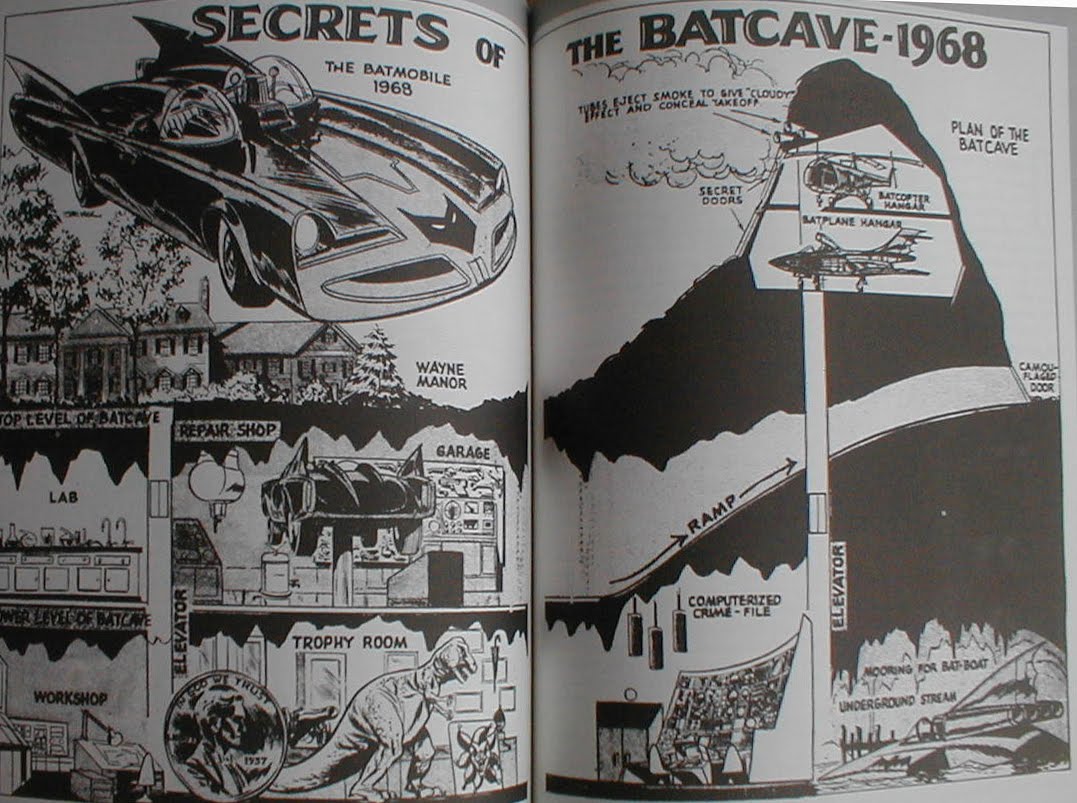 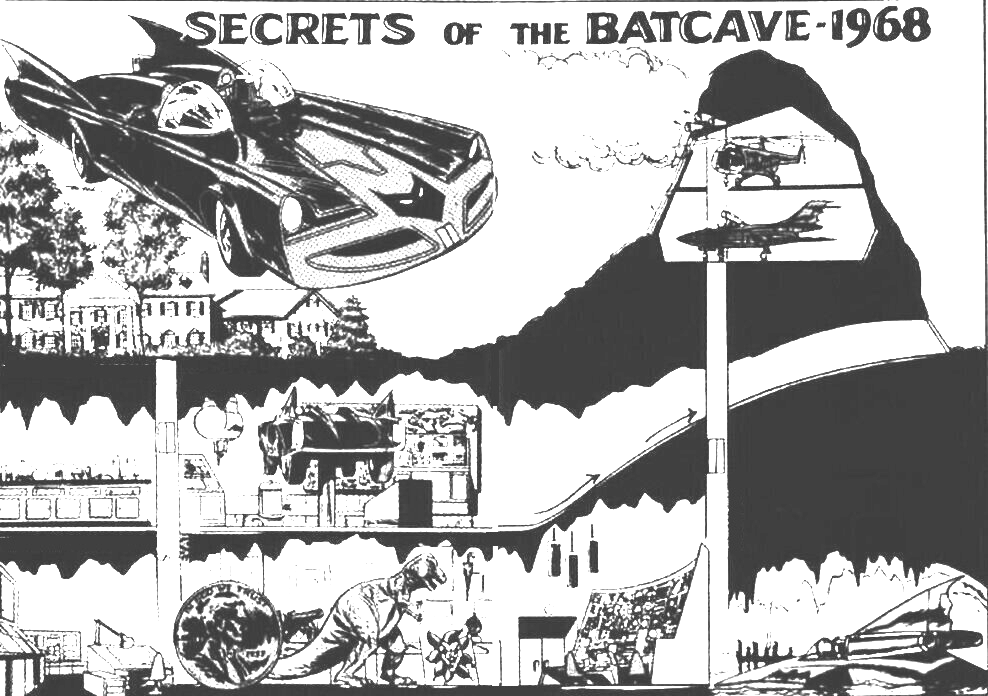 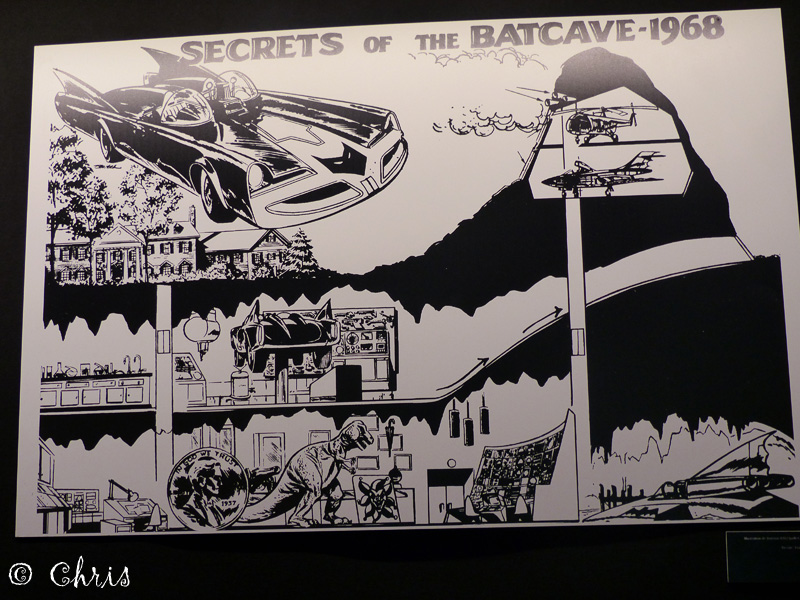 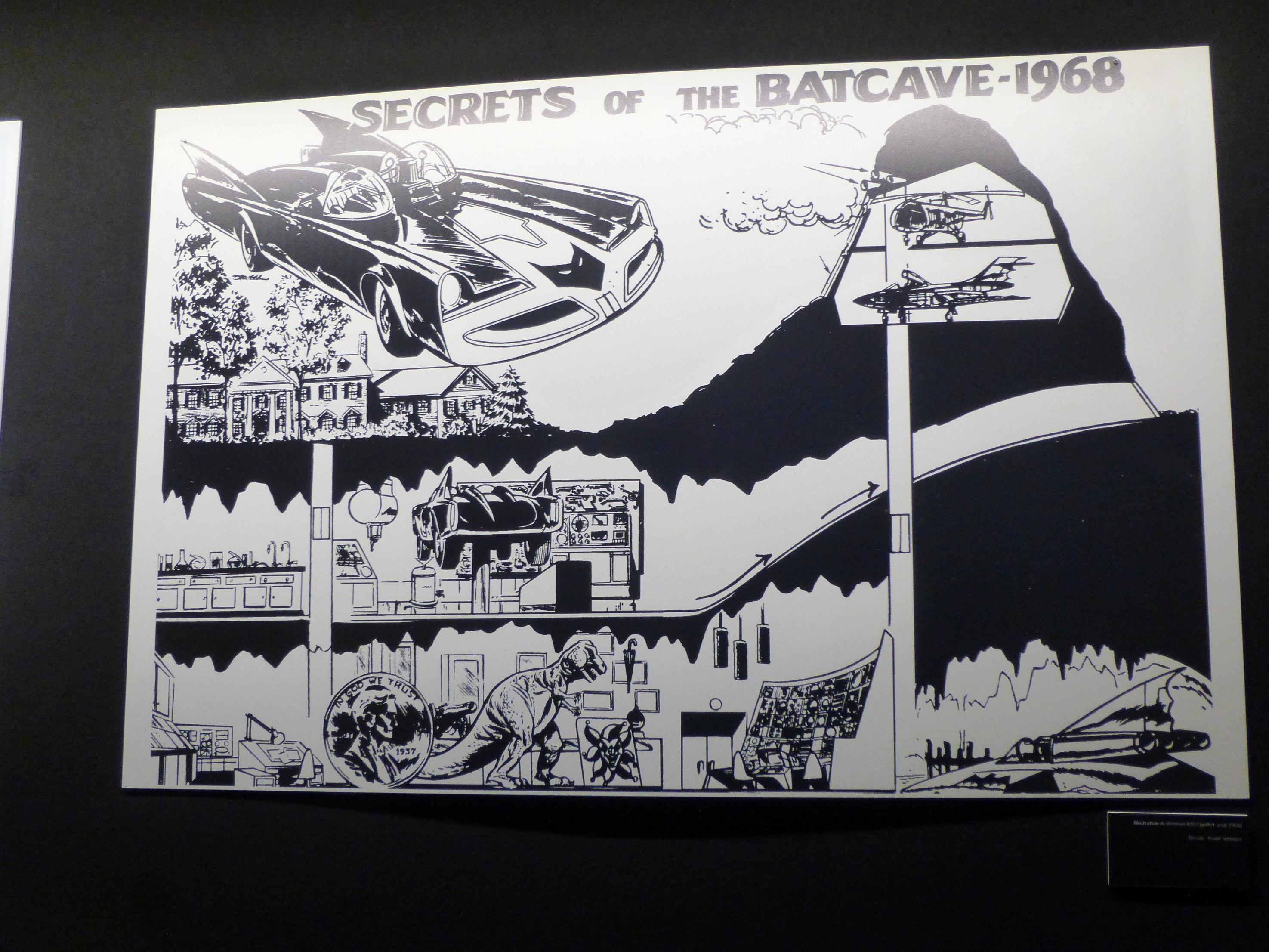 The appearance in Giant Batman #203 is the original. A black-and-white version appeared on the cover of that issue. 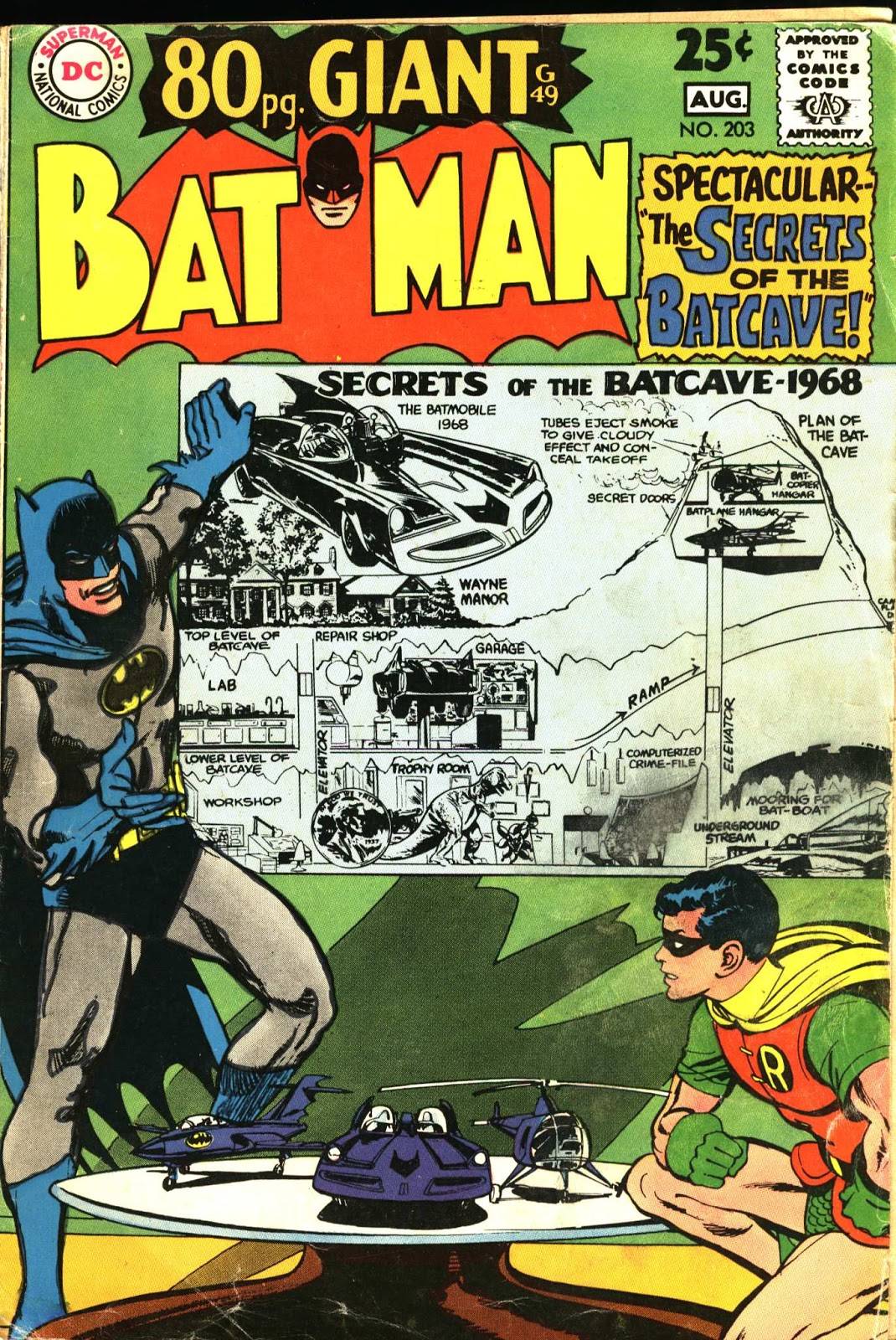 In the late 1960s, the 80-page Giant Batman was primarily a reprint series that appeared twice a year. Generally, there was a theme to each issue (such as stories about major villains, or about the women in the Caped Crusader's life). As you can see, for #203, the issue theme was "The Secrets of the Batcave." Each issue's table of contents stated where the material in the issue had originally appeared, and occasionally indicated that the content was new to that issue.*

The contents page in #203 lists

A BATMAN SPECIAL
THE BATCAVE 1968

which indicates that the plan of the cave was new content. 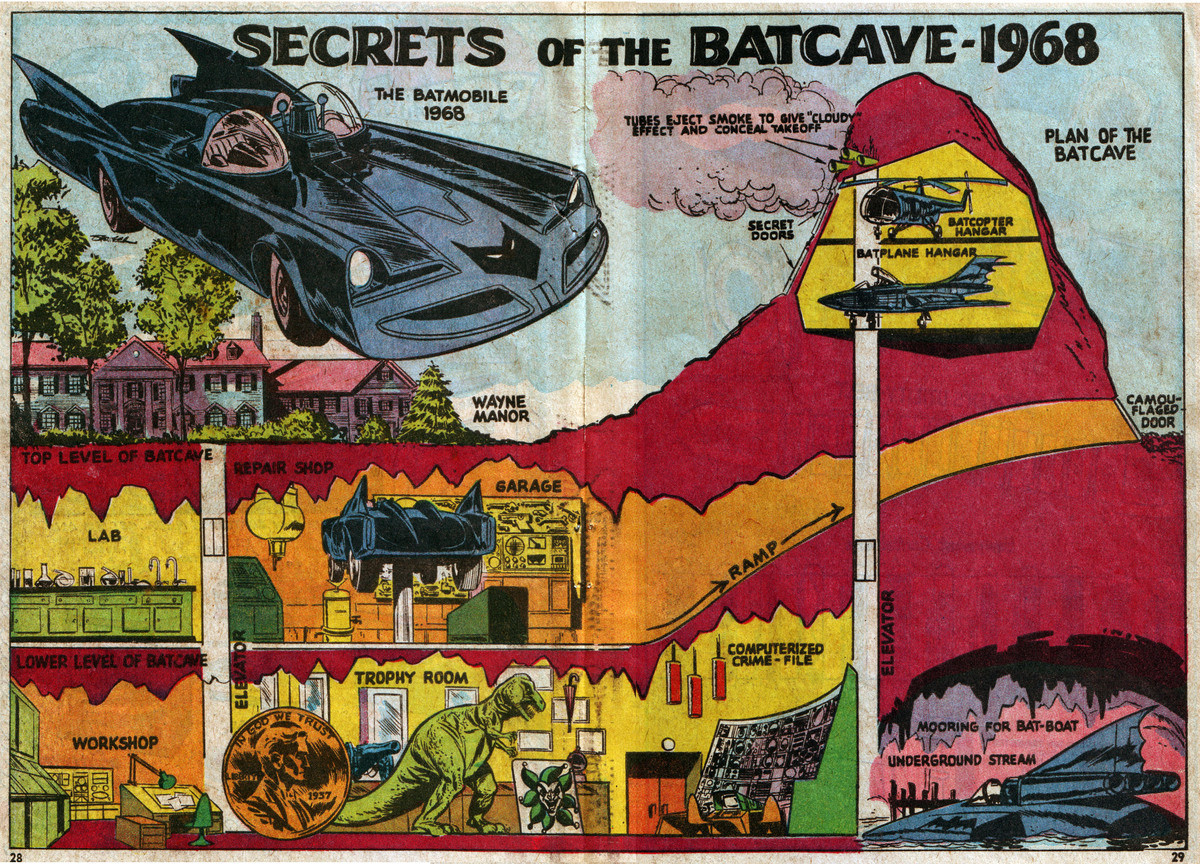 The original black-and-white artwork for the two-page spread in #203 was evidently retained by DC and reused several times with different color schemes, including full-color versions and the 1969 red-and-white duotone. For example, a poster of one recolored version was given away in 1977 as a prize for high-achieving students in the SRA independent reading program used in may American elementary schools (including mine). 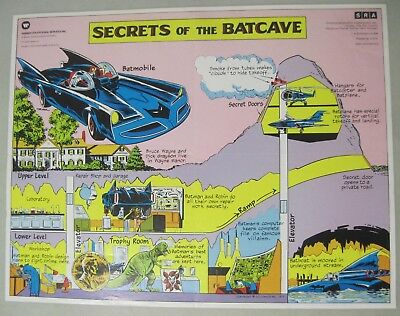 A further question is who produced the artwork. The Giant issue #203 actually falls right at a changeover in the art for the Batman series. The previous issue, #202, had been credited to Bob Kane, one of the co-creators of Batman and Robin. However, Kane had apparently be getting the issues drawn and ghostwritten by others for years. With issue #204, however, a new creative team was credited, including pencil artist Irv Novick and inker Joe Giella. The Batmobile in the "Secrets of the Batcave—1968" is practically identical to the way Novick drew the the Batmobile starting in #204. (The small rear view of the Batmobile, the drawing of the Batboat, and the models shown on the table on the cover also conform to the designs used during the period when Novick and Giella were working on the magazine.) In contrast, the Batmobile from "Secrets of the Batcave—1968" is clearly dissimilar to the way the vehicle was shown in the immediately preceding "Bob Kane" issues. The placement of the mask symbol at the front of the vehicle is particularly distinctive of the change in artistic styles. Based on these facts (and some other artistic similarities), I think it is reasonable to conclude that the original artwork for the Batcave cutaway was produced by by Irv Novick, probably with Joe Giella inking.

There is an signature below the Batmobile, which I think is too messy to be legible (and may not even be complete).

However, the last letter, at least, does strongly resemble the way Irv Novick signed the "k" at the end of his name. Here is another, clear, version of his signature for comparison.

Incidentally, the new depiction of the the 1968 Batcave was an expansion and update to an earlier plan shown in the first story reprinted in Giant Batman #203, "The 1,000 Secrets of the Batcave!" from 1948. 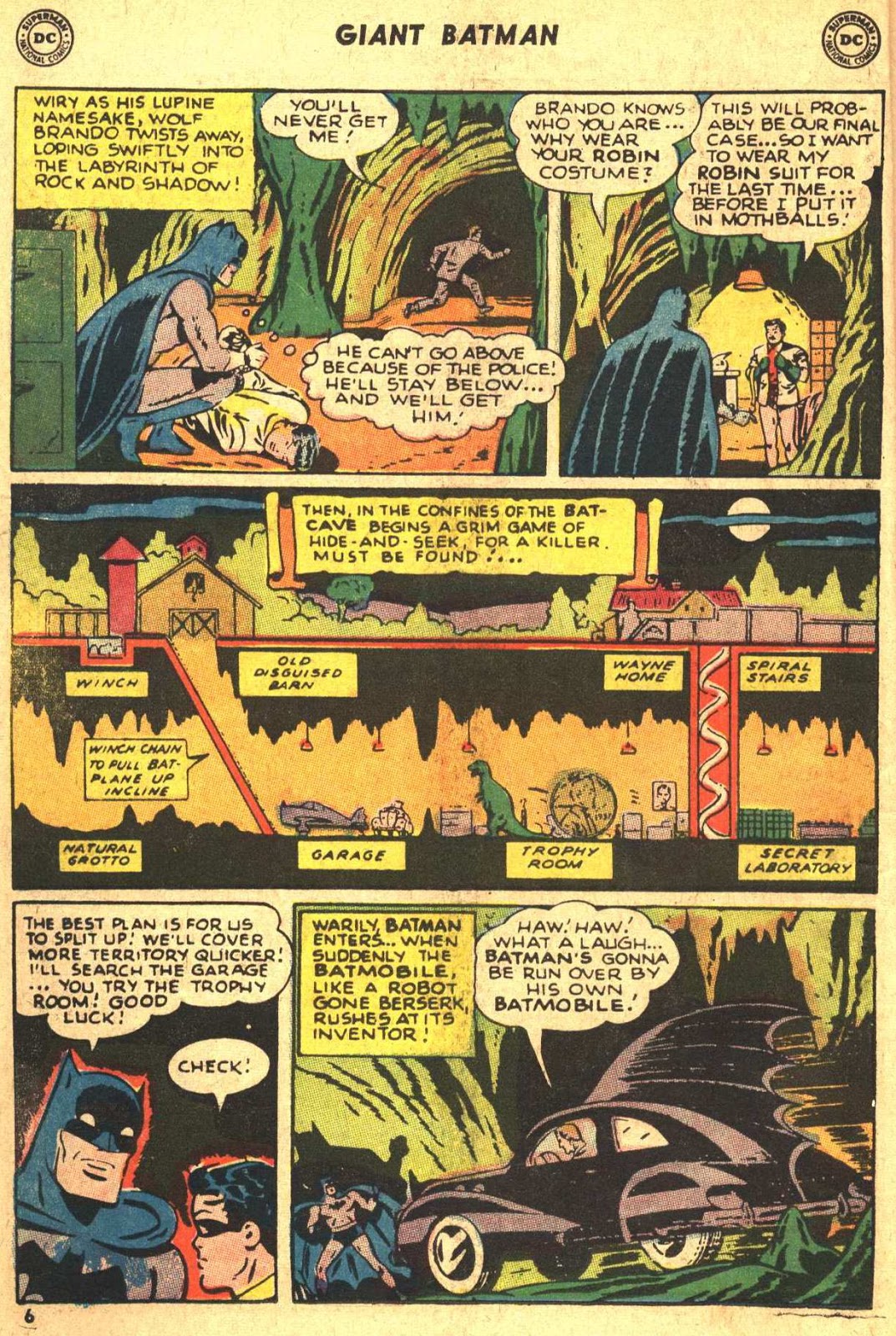 The original 1948 issue, #48, in which that story appeared also had a black-and-white version of the plan on the cover, which the cover of #203 was clearly an homage to.

*Actually, the very next Giant Batman issue, #208, was accidentally printed without a table of contents that listed where the various stories were being excerpted from. However, that was corrected by printing the information in the letter column of the yet next issue, #213.