Biological androids are common, but they are treated as subhuman or at least in a pretty racist way. (They aren't robots at all, more like a re-creation or variety of humans. I don't think they can procreate, at least not sexually. Possibly in factories, but if so, probably these factories are run by humans, not androids themselves.)

Some powerful person sponsors the building of a huge tower in the frozen tundra. The tower may be a big laser used to propel a space ship from Earth, but I don't recall for sure. I also think the tower may topple before it's completed, because climate change causes the permafrost to melt before the construction is complete.

There is space travel, possibly with time dilation.

To my young mind, the book felt very epic.

This is Robert Silverberg's "Tower of Glass", 1970. (ISFDB entry), (Wikipedia entry, which has a good synosis including, evidently, spoilers)

From the blurb (Panther Science-Fiction, 1976):

It is the year 2218. Above the Arctic tundra rises a mighty glass tower, conceived by magnate Simeon Krug, who is intent on answering signals from deep space. Krug spurs the con­struction of the tower, but he is unprepared for an impending crisis. Unknowingly, he has become a god, with a god's re­sponsibilities ...

The story has two threads:

Simeon Krug has become immensely powerful by inventing a way to create androids derived from humans, who are, however, sterile (think Tyrell in Blade Runner). Androids are used for all manner of infrastructure and maintenance tasks and generally regarded the same as robots. They are, however, still equipped (graced?) with human minds. Krug's doesn't care about his creation (I can't remember whether he is not above taking female androids home). His personal Holy Grail consists in finding a way to communicate with what appears to be an alien intelligence, as a message from the stars was received:

The room was furnished simply, even starkly: a lengthy rectangle that contained a desk, a data terminal, a small somber sculpture, and a dark drape that would, at the touch of a repolarizing stud, reveal the panorama of New York City far below. The lighting, indirect and subdued, kept the office in eternal twilight. On one wall, though, there blazed a pattern in brilliant yellow luminescence : 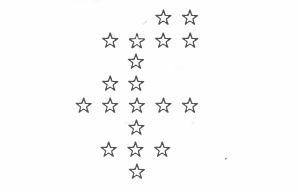 It was the message from the stars.

The aliens keep sending the same sequence from a planetary nebula that should be inimical to any live. It comes in via radio and various frequencies and laser, so it is not likely to be a natural phenomenon.

(Btw, the description of the message left no room to account for the indentation in the image given. Weird, that!)

Krug has ordered the building of a tachyon-based superlight communications device in the arctic tundra to set up a link. The device has the form of an immense diamond spire. Androids are working on it incessantly to get it finished as fast as possible. Work accidents are not rare. Active cooling keeps the tundra soil deeply frozen so that it can supports the tower's weight.

Android Thor Watchman has established the Church of Krug among the androidfolk. Krug is revered as Creator who will eventually set the androids free. Watchman hopes to eventually convince Krug to intercede on behalf of android freedom (though there seem to be some steps that are missing regarding how this is supposed to really work). However, prospects aren't good:

'A bleak prospect,' croaked Krishna Guardsman, whose teachings on the relationship of Krug to android were revered by all. 'However, I take comfort in the thought that if Krug struck Alpha Nucleus down to show His dislike of the equality movement. He did so merely to oppose political agitation for equality now, and was in effect reminding us to be more patient and await His grace. But -'

'We should also consider a much darker possibility,' said Mazda Constructor. 'Is Krug capable of evil? Was His role in the killing a wicked one? If so, then perhaps the entire founda­tion of our creed must be reexamined and even rebuilt, for if Krug can act arbitrarily and immorally, then it follows -'·

'Wait! Wait!' called an uneasy voice from the rear of the group. 'No such talk as this in a chapel!'

the android's hopes of freedom are dashed and a musuclar uprising ensues. The tower is destroyed by thawing of the tundra soil, its purpose unfulfilled. Krug, still chasing his Holy Grail, leaves in a sub-light ship for the aforementioned nebula, having been put in hibernation. Thus the uncaring mini-god gives up all for something unknown.

From the OP's question:

This is not actually true. It spans maybe a year or so.

Biological androids are common, but they are treated as subhuman or at least in a pretty racist way.

They are, in fact, tools.

15
Trying to find a book about rediscovered space travel after interstellar war isolates planets
14
Book trilogy where adults walk towards towers involuntarily at a certain age
7
1970s or 80s kids' book series about friendly android doppelgangers
8
Book with man and female AI, possibly in space
10
Fantasy book with a young male transported to another world; giants and strange sexual themes?
16
What is this science fiction short story about sex determined at puberty, and three genders?