Why doesn't a blackhole destroy a Stargate?

In at least one episode, the SGC dials a planet that is in the midst of being destroyed by a blackhole. Will the blackhole eventually destroy the Stargate (on either end) and terminate the wormhole? If the Stargate did break, would that be enough to stop the wormhole?

I believe that because of the time dilation (as depicted in the Stargate universe) that occurs near a black hole, the Stargate's descent into the black hole slows down relative to our time after the Stargate passes the Event Horizon.

So essentially, the Stargate maybe destroyed at some point in the future, but because time relative to the Stargate will slow down exponentially, the gate will always appear to be falling towards the black hole at a relatively slower and slower rate.

Furthermore, the Stargates are made of Ancient engineered materials which makes them highly resistance to damage, and therefore Stargates may survive the gravitational stresses of a black hole longer than a conventional object.

The Stargates themselves are extremely resistant to damage or destruction: in one case, a Stargate survived a direct hit from a meteor, while another was still capable of creating a stable wormhole while on a planet near a newly formed black hole. A Stargate has also been seen to continue functioning while entering a star, though it was protected by a portable forcefield for a portion of its journey. In the SG-1 fourth season episode "Chain Reaction", the SGC sent a naquadah-enhanced nuclear bomb to a planet whose surface had trace amounts of naquadah in its topsoil; the explosion destroyed the entire planet, yet the gate still remained open and intact.

However, the article goes on to state that a Mark IX is probably one of the few weapons proven to destroy a Stargate. 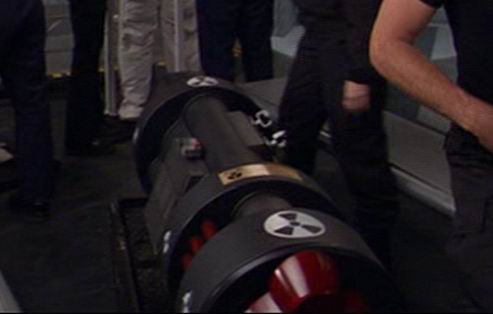 On another point, even if the Stargate does not slow relative to our time, it maybe on a decaying orbit that may take far longer than a direct path to the center of the black hole.

I'm not sure if this is how actual physics works around a black hole, but I think this is how Stargate's writing staff looks at and depicts a black hole. The show Andromeda also depicted black holes in the same more-time-dilation-as-you-get-closer fashion.

Will the black hole eventually destroy the Stargate as time approaches infinity?

The writers never directly answer this question in the Stargate franchise, but we do see one of the ancient's ships in Stargate Universe survive in close proximity to a sun's gravitational pull. However the Stargates are not exactly depicted as invulnerable, so it is possible a black hole would eventually destroy a stargate. It just appears to take an incredible amount of energy or force, which one might argue a black hole could possess.

35
How does the Stargate Wormhole know whether it can close itself, or if there are more people coming through?
11
Could a Stargate be used to destroy another Stargate?
18
What was missing that kept Stargate Command from making their own Stargates?
30
What happens to objects that enter a Stargate from the destination side?
12
How come SG-1 couldn't get back to Earth?
6
If Langford's team could reach Heliopolis by stargate in 1945, why was Abydos the only planet SGC could dial before discovering the Abydos Cartouche?
11
In the Stargate episode "threads" who stops the self destruct?
10
Wouldn't being underwater be the same as burying the gate?