In Larry Niven's collection N-Space, he says this regarding his novel World of Ptavvs:

Alexei Panshin wrote a savage review of PTAVVS. I wish I had a copy, but I tore the fanzine up in a rage, and I don't remember the name or even the editor. I was fool enough to write an answer to that review! I learned better later. Meanwhile Alexei had used PTAVVS in an essay on writing, as a textbook case of how not to write science fiction.

Here's a link to the page in Google Books.

Does anyone know what fanzine this could have been, and if the review might be available anywhere?

This was Larry's first novel, and one of my earliest book reviews, published in a fanzine. We were both starting out then, and I'm sure it showed in both cases. I understand how the things I said got under Larry's skin and I suspect he never again wrote a story about someone in a spacesuit with an exterior off/on button that someone of ill will could push. I probably have a copy of the review in a box in the basement, but I don't have the inclination to locate it now, the time available to find it, or the physical ability to check it out sixty some years later. Contrary to Larry's memory, I didn't mention the book again after that, but Larry and I did have a convention conversation about the review in a later day. // Contrary to the commenter's impression, Cory is my wife and not my husband, and we have two biological sons to prove it.

With help from from FuzzyBoots and Alexei Panshin himself, the review was located:

Steve (alittleblackegg on Flickr) was kind enough to provide photos of the article. Here's an Imgur album of all 10 pages. I've embedded the three pages dealing with World of Ptavvs below. 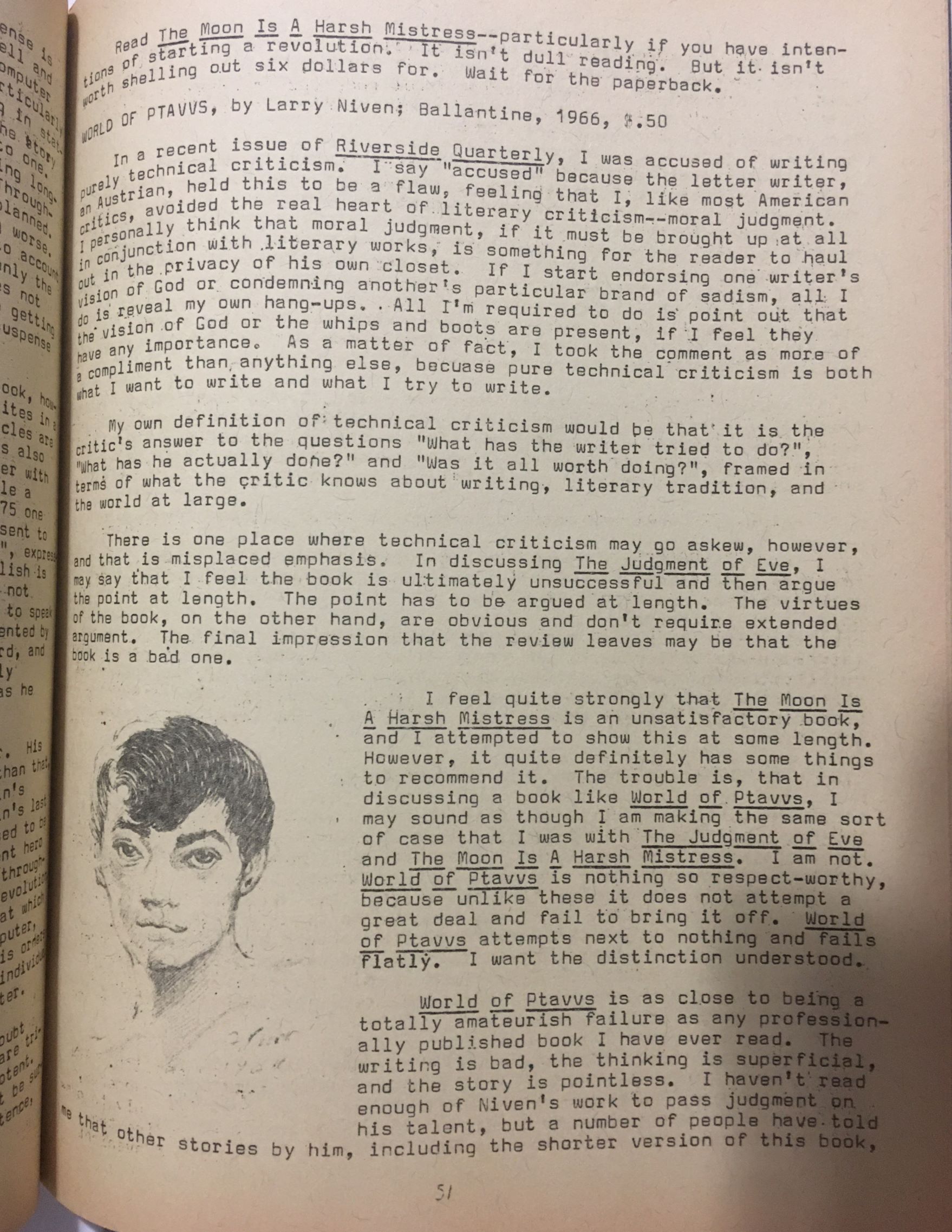 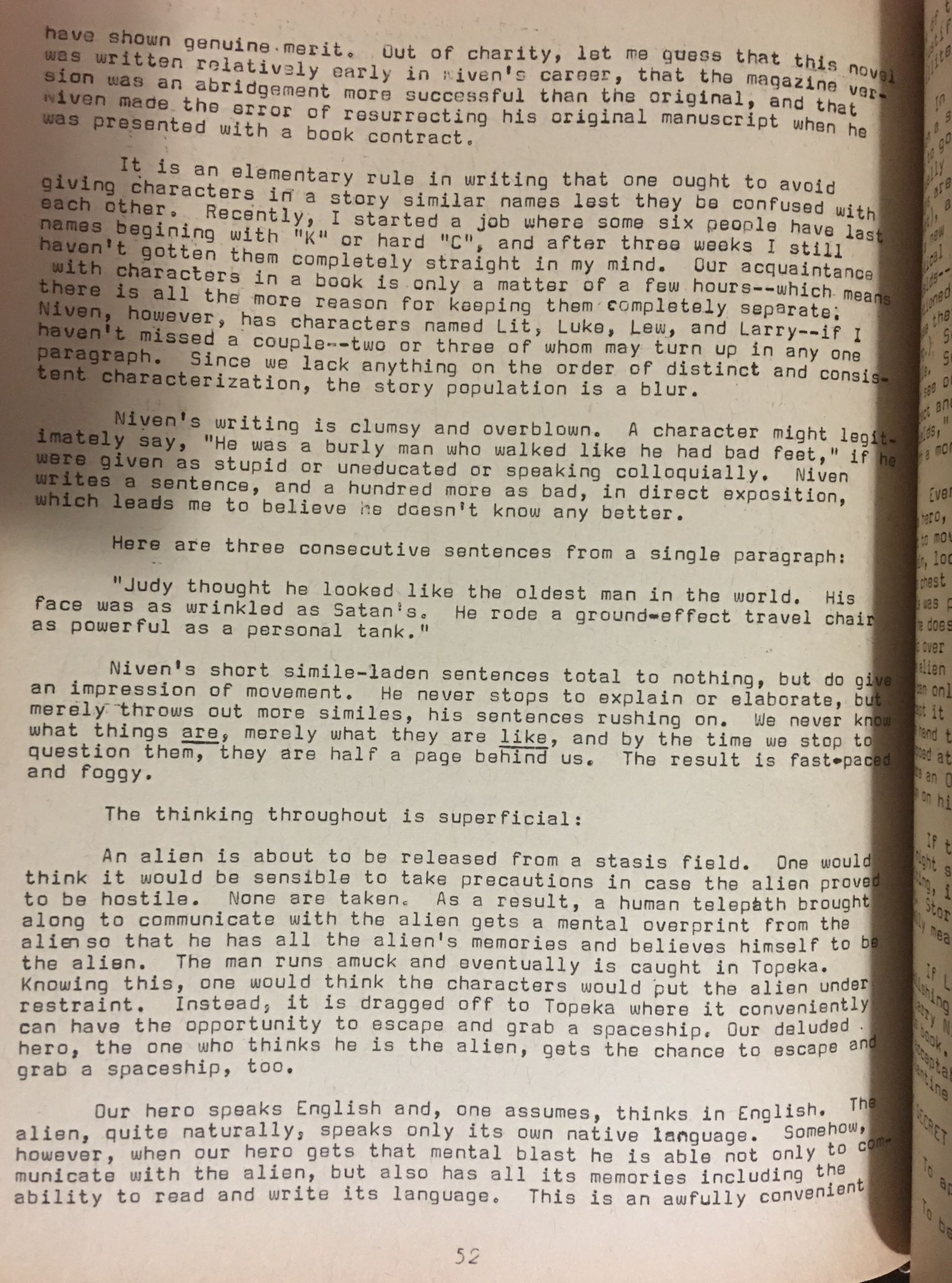 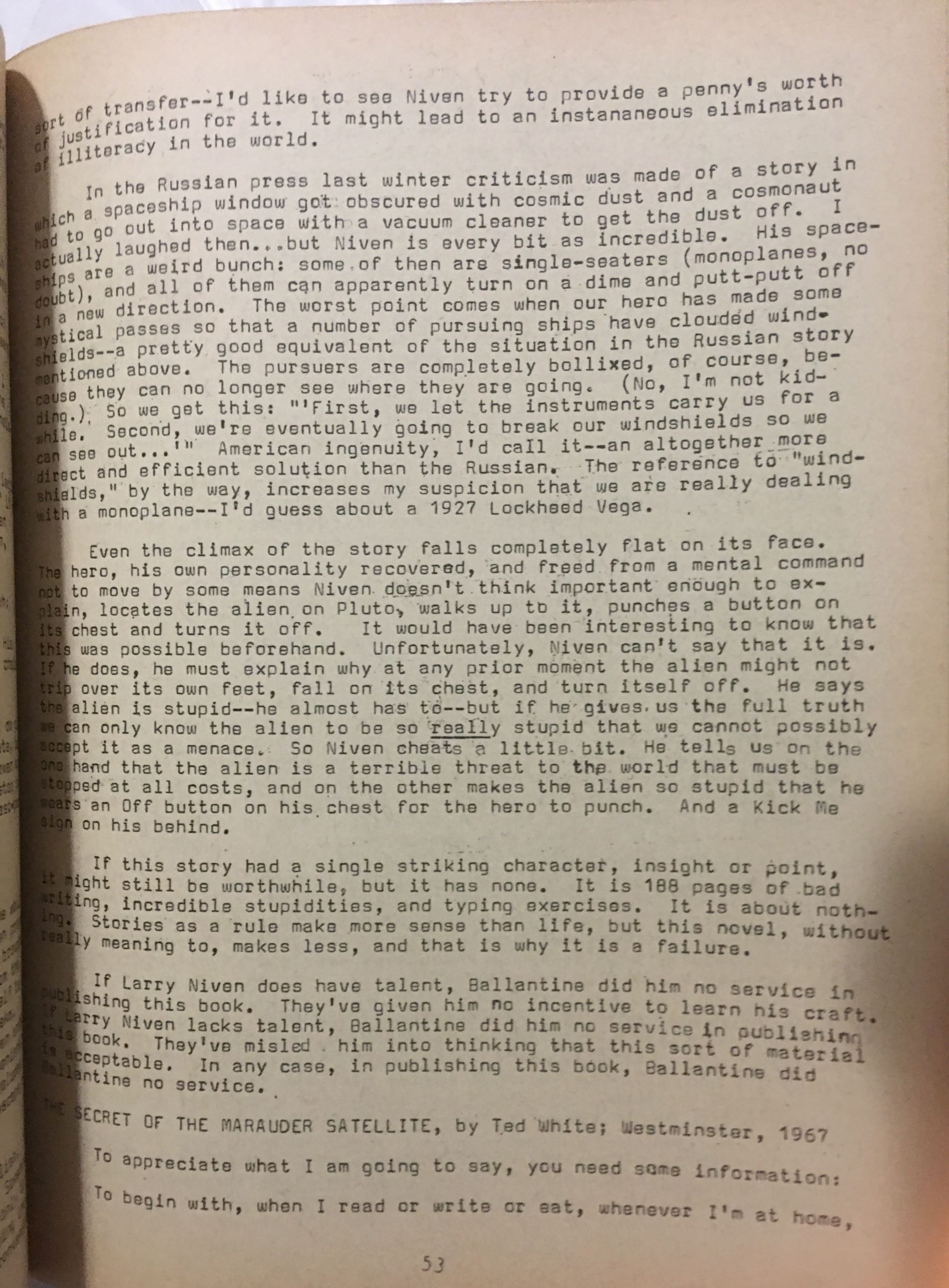 In a recent issue of Riverside Quarterly, I was accused of writing purely technical criticism. I say "accused" because the letter writer, an Austrian, held this to be a flaw, feeling that I, like most American critics, avoided the real heart of literary criticism—moral judgment. I personally think that moral judgment, if it must be brought up at all in conjunction with literary works, is something for the reader to haul out in the privacy of his own closet. If I start endorsing one writer's vision of God or condemning another's particular brand of sadism, all I do is reveal my own hang-ups. All I'm required to do is point out that the vision of God or the whips and boots are present, if I feel they have any importance. As a matter of fact, I took the comment as more of a compliment than anything else, because pure technical criticism is both what I want to write and what I try to write.

My own definition of technical criticism would be that it is the critic's answer to the questions "What has the writer tried to do?", "What has he actually done?" and "Was it all worth doing?", framed in terms of what the critic knows about writing, literary tradition, and the world at large.

There is one place where technical criticism may go askew, however, and that is misplaced emphasis. In discussions The Judgment of Eve, I may say that I feel the book is ultimately unsuccessful and then argue the point at length. The point has to be argued at length. The virtues of the book, on the other hand, are obvious and don't require extended argument. The final impression that the review leaves may be that the book is a bad one.

I feel quite strongly that The Moon Is A Harsh Mistress is an unsatisfactory book, and I attempted to show this at some length. However, it quite definitely has some things to recommend it. The trouble is, that in discussing a book like World of Ptavvs, I may sound as though I am making the same sort of case that I was with The Judgment of Eve and The Moon Is A Harsh Mistress. I am not. World of Ptavvs is nothing so respect-worthy, because unlike these it does not attempt a great deal and fail to bring it off. World of Ptavvs attempts next to nothing and fails flatly. I want the distinction understood.

World of Ptavvs is as close to being a totally amateurish failure as any professionally published book I have ever read. The writing is bad, the thinking is superficial, and the story is pointless. I haven't read enough of Niven's work to pass judgment on his talent, but a number of people have told me that other stories by him, including the shorter version of this book, have shown genuine merit. Out of charity, let me guess that this novel was written relatively early in Niven's career, that the magazine version was an abridgement more successful than the original, and that Niven made the error of resurrecting his original manuscript when he was presented with a book contract.

It is an elementary rule in writing that one ought to avoid giving characters in a story similar names lest they be confused with each other. Recently, I started a job where some six people have last names beginning with "K" or hard "C", and after three weeks I still haven't gotten them completely straight in my mind. Our acquaintance with characters in a book is only a matter of a few hours—which means there is all the more reason for keeping them completely separate. Niven, however, has characters named Lit, Luke, Lew, and Larry—if I haven't missed a couple—two or three of whom may turn up in any one paragraph. Since we lack anything on the order of distinct and consistent characterization, the story population is a blur.

Niven's writing is clumsy and overblown. A character might legitimately say, "He was a burly man who walked like he had bad feet," if he were given as stupid or uneducated or speaking colloquially. Niven writes a sentence, and a hundred more as bad, in direct exposition, which leads me to believe he doesn't know any better.

Here are three consecutive sentences from a single paragraph:

"Judy thought he looked like the oldest man in the world. His face was as wrinkled as Satan's. He rode a ground-effect travel chair as powerful as a personal tank."

Niven's short simile-laden sentences total to nothing, but do give an impression of movement. He never stops to explain or elaborate, but merely throws out more similes, his sentences rushing on. We never know what things are, merely what they are like, and by the time we stop to question them, they are half a page behind us. The result is fast-paced and foggy.

The thinking is superficial:

An alien is about to be released from a stasis field. One would think it would be sensible to take precautions in case the alien proved to be hostile. None are taken. As a result, a human telepath brought along to communicate with the alien gets a mental overprint from the alien so that he has all the alien's memories and believes himself to be the alien. The man runs amuck and eventually is caught in Topeka. Knowing this, one would think the characters would put the alien under restraint. Instead, it is dragged off to Topeka where it conveniently can have the opportunity to escape and grab a spaceship. Our deluded hero, the one who thinks he is the alien, gets the chance to escape and grab a spaceship, too.

Our hero speaks English and, one assumes, thinks in English. The alien, quite naturally, speaks only its own native language. Somehow, however, when our hero gets that mental blast he is able not only to communicate with the alien, but also has all its memories including the ability to read and write its language. This is an awfully convenient sort of transfer—I'd like to see Niven try to provide a penny's worth of justification for it. It might lead to an instantaneous elimination of illiteracy in the world.

In the Russian press last winter criticism was made of a story in which a spaceship window got obscured with cosmic dust and a cosmonaut had to go out into space with a vacuum cleaner to get the dust off. I actually laughed then...but Niven is every bit as incredible. His spaceships are a weird bunch: some of them are single-seaters (monoplanes, no doubt), and all of them can apparently turn on a dime and putt-putt off in a new direction. The worst point comes when our hero has made some mystical passes so that a number of pursuing ships have clouded windshields—a pretty good equivalent of the situation in the Russian story mentioned above. The pursuers are completely bollixed, of course, because they can no longer see where they are going. (No, I'm not kidding.) So we get this: "'First, we let the instruments carry us for a while. Second, we're eventually going to break our windshields so we can see out...'" American ingenuity, I'd call it—an altogether more direct and efficient solution than the Russian. The reference to "windshields," by the way, increases my suspicion that we are really dealing with a monoplane—I'd guess about a 1927 Lockheed Vega.

Even the climax of the story falls completely flat on its face. The hero, his own personality recovered, and freed from a mental command not to move by some means Niven doesn't think important enough to explain, locates the alien on Pluto, walks up to it, punches a button on its chest and turns it off. It would have been interesting to know that this was possible beforehand. Unfortunately, Niven can't say that it is. If he does, he must explain why at any prior moment the alien might not trip over its own feet, fall on its chest, and turn itself off. He says the alien is stupid—he almost has to—but if he gives us the full truth we can only know the alien to be so really stupid that we cannot possibly accept it as a menace. So Niven cheats a little bit. He tells us on the one hand that the alien is a terrible threat to the world that must be stopped at all costs, and on the other makes the alien so stupid that he wears on Off button on his chest for the hero to punch. And a Kick Me sign on his behind.

If this story had a single striking character, insight or point, it might still be worthwhile, but it has none. It is 188 pages of bad writing, incredible stupidities, and typing exercises. It is about nothing. Stories as a rule make more sense than life, but this novel, without really meaning to, makes less, and that is why it is a failure.

Not the answer you're looking for? Browse other questions tagged larry-niven known-space fandom or ask your own question.

307
How long was Bill Murray's character (Phil Connors) supposed to be in a time loop in the film “Groundhog Day”?

5
Are the Milky-Way solar systems depicted in Larry Niven's “Known Space” based on “real world” astonomy viewed from Earth?