I read this novel or novelisation one afternoon at the city library somewhere between late 1984 and early 1986.

It was set in the Star Wars universe and the main story was that there was some sort of crystal on a planet that could amplify /boost the power of a force-user/adept.

Luke and Leia are both on the planet where this crystal is and are trying to stop the Empire, specifically Darth Vader, getting hold of it.

I think they find a small splintered-off piece of the crystal early on and find that it works as advertised and are then terrified of what the whole thing would be able to do.

At one point Luke is incapacitated or they get separated (not sure which) and Leia faces Vader alone. She has this total BAMF moment where she fights Vader with a lightsaber and drops him off a cliff.

I don't remember the ending or much else of it, although I think the crystal was either destroyed or buried beyond any force user's ability to retrieve.

Sorry I don't have more details, but I was only 13 or 14, and speed read it in under two hours while waiting for a friend to finish at the dentist, and it seems like another lifetime.

The crystal bit sounds like Splinter of the Mind's Eye, a very early Star Wars novel written by Alan Dean Foster when it wasn't for sure the second movie would be made.

I haven't read it since it came out, but the linked wiki article says the end is

Luke then duels Vader, deflecting some Force-based attacks and eventually slicing off Vader's arm. Despite this, the Sith lord seems about to win, but then falls into a pit. Luke senses that this is not the end of Vader. He and Leia, healed by the crystal, drive off with Halla into the mists of Mimban.

Maybe the "falls into the pit" is the BAMF moment you remember.

Wookieepedia also has a lot of detail on the book, but here is the summary:

Splinter of the Mind's Eye, formerly subtitled *From the Adventures of Luke Skywalker, is a Star Wars Legends novel written by Alan Dean Foster. It acts as a sequel to Star Wars: Episode IV A New Hope, which Foster wrote the novelization of, and it was the first installment of the Star Wars Expanded Universe. The novel was first published by Del Rey on February 12, 1978.

Set in 2 ABY, Splinter of the Mind's Eye follows Luke Skywalker and Leia Organa to the planet Mimban, where they seek out the powerful Kaiburr crystal and encounter Darth Vader. 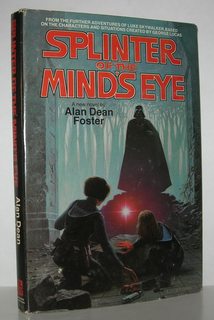 OP has provided these additional details about the story:

Not the answer you're looking for? Browse other questions tagged story-identification star-wars novel the-force or ask your own question.

6
Does one's ability to use the Force depend on distance?
117
Is the Dark Side of the Force more powerful?
2
Did Obi-Wan Kenobi prefer Luke over Leia?
10
Why couldn't Yoda save (or help Luke save) Han and Leia in ESB?
5
Why was Vader not able to read Leia's thoughts like he read Luke's thoughts?
18
Why didn't Vader detect the Force in Leia?
13
How did Vader know that Luke would correctly interpret the Force vision to go to Bespin?
6
Why do the heroes in Star Wars keep letting their Force-sensitive foes detect them?