This was on TV god knows how long ago- I guess the upcoming holidays shook my memory of it loose. Like I said it was stop motion animated, and claimed to tell the story of Santa Claus, but in this version of his story he is threatened by a group of giants who for some reason or another oppose his leaving gifts for children. The giants are said to be able to turn invisible whenever they want, but in spite of this talent Santa successfully slays them with a magical or blessed axe.

I haven't found mention of an axe so far, but The Life and Adventures of Santa Claus matches on the other counts. 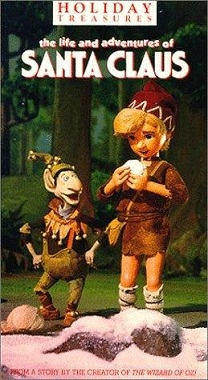 Long ago in the Forest of Burzee, a council meeting is held where the Great Ak tells the story of Santa Claus to the leaders of the Immortals, hoping to persuade them to grant Claus immortality. About 60 years earlier, the Great Ak finds an abandoned baby in the snowy woods on the border of the Forest. He gives it to the lioness Shiegra to raise. However, after hearing about the discovery of the infant, Necile, a Wood Nymph, steals him from Shiegra and goes to the Great Ak, begging him to let her raise the child. After initial concern that a human was brought into the Forest which is against the law, the Great Ak allows Necile to raise the child while Shiegra stays to protect them. Necile names the child "Claus".

When Claus has grown to be a young man, the Great Ak takes him to see the mortal world and its cruelty and suffering. Claus learns that he must live there and make it better. He leaves the Forest and lives in a workshop in the Laughing Valley of Hohaho with Shiegra and Tingler, a Sound Imp. As he gets older, he works to bring happiness to children in a nearby village. He eventually makes toys (the first being a wooden black cat modeled after the kitten Blinky that Necile sent to them, which he gives to the orphan boy Weekum). He is occasionally assisted by a group of Ryls, Knooks, and Wood Nymphs from the Forest.

Meanwhile, evil creatures called the Awgwas (who influence children to do bad things and who are led by King Awgwa) are not happy with Claus's efforts to bring happiness to children, so they attempt to stop Claus from making and delivering toys. At first, they send a warning to Claus, telling him to stop or they would come for him. After Claus ignores the warning, the Awgwas kidnap him, but he calls for aid from the Knooks, who help him escape. As he and his friends make attempts to deliver toys to the village, the Awgwas repeatedly ambush them and steal the toys. Claus tries to go alone by night, but he is again ambushed.

The Awgwas are evil giants who can turn invisible, which matches. 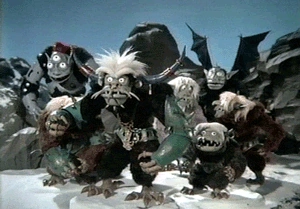 Clip from the film showing the stop motion animation style

The Oz entry for the Awgwas (this film being adapted from the L. Frank Baum book of the same name) has them chopped in half by the Master Woodsman, so it may be that they kept that aspect of the tale, but had Claus do it instead.

Ak the Master Woodsman confronted the Awgwas and demanded that they leave Claus in peace. In reply, the Awgwas declared their intention to kill the man and declared war on the immortals. They gathered an army of evil creatures including Asiatic Dragons, Giants of Tartary, Black Demons from Patalonia, and Goozzle-Goblins. There was an epic battle which is sung of in Fairyland to this day, but ultimately the Awgwas and their allies were defeated. The King Awgwa was cloven in two by the Master Woodsman, and his subjects were transformed into clods of dirt by the Wood Nymphs. (The Life and Adventures of Santa Claus)

Not the answer you're looking for? Browse other questions tagged story-identification stop-motion-animation or ask your own question.