Which Sci-Fi comic book series was the first to be based on a character after that character was featured in the movies?

I'd like to throw good ol' Mickey Mouse into the mix. Having his movie debut back in 1928 and his comic book series starting in various places around 1937. Donald Duck seemed to be a more popular comic character and even made it into news paper comic strips around the same time, although his animated appearance was far later than Mickey, around 1934.

I've got an earlier one. Gertie the Dinosaur, one of the very first cartoons EVER. Well… During he was making the film, Winsor McCay worked also on a comic serie, Little Nemo in Slumberland. And his upcoming character appeared on September 21, 1913 as a background character in an episode of Little Nemo in Slumberland. Of course, you could argue that it's more a cameo or a nod of the author than really an adaptation, but still, one of the earliest connections.

Also, according to Wikipedia, Winsor McCay's son Robert tried to revive the character of Gertie in comics, during the 1950's, but I don't know if it counts (the original movie was one of the firsts, but between the movie and the comic adaptation, other movies were adapted in other comics… quite debatable). 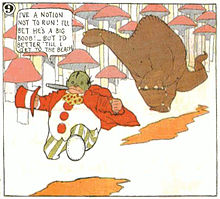 The earliest example I can think of is James Bond, who jumped from book to movie in 1962 and then from movie to comic series decades later.

13
Actor with the most comic-book movie roles?
8
Lightsaber claws in Expanded Universe?
9
What comic book super hero/villain has appeared with the most "real life" individuals?
13
What is the first instance of teleportation using a machine (aka transporter) in Sci-Fi movies or TV?
26
Identify a (French?) comic series about a female adventurer
12
Who was the first stretching comic book character?
22
Who was the first sci-fi/fantasy character to be betrayed by their cape?
5
What was the first self-referential scifi book?
22
Who is the oldest character in the MCU, in real-world terms?