A cartoon about football and saving the Earth

I'm pretty sure it aired at MBC 3. It’s a cartoon about playing football to save the planet. It’s not Galactik Football or Team Galaxy. I remember one blond boy with poofy hair I think he wore something blue when playing.

When they would play it would look like they are in a round sphere, and maybe the ball was blue too and it had something special about it. I do remember something else. They had to keep it a secret from their parents, and also whenever someone scores, the ball disappears and comes back in the middle.

story-identification cartoon space
Share
Improve this question
edited May 27, 2021 at 21:16

In order to save Earth from elimination, Earth Eleven must win through the [soccer] tournament against all kinds of aliens...

All the humans wear blue and white. I’m not sure if there’s something special about the ball, but it does seem to be engulfed in blue fire at one point (near the start of episode 38). 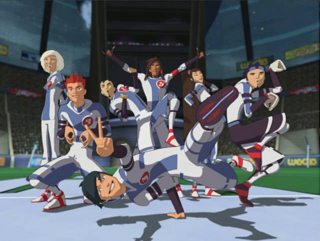 In the universe of Galactik Football, the inhabited worlds of the Zaelion Galaxy compete in Galactik Football, a sport analogous to football, but played seven to a side. The game is complicated by the addition of the Flux, a magical energy which enhances a player's attributes such as speed, strength, and agility, or grants special powers such as teleportation. The story follows the fate of an inexperienced Galactik Football team, the Snow Kids, as they aim to compete in and win the Galactik Football Cup.

Watching some clips online, the stadium does seem to be in a sphere sort of shape. There isn't a boy with poofy blond hair, but Tia matches that description otherwise, and they all wear blue on their uniforms. The color of the ball varies, but there are episodes with partly blue balls to be certain. 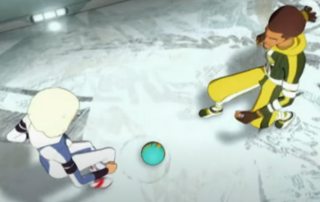 Found with the search terms of cartoon space football

Maybe Next Gen I don't remember the blond boy (but there is a blond dog ...) There is soccer (football), but it is not the the primary plot, but used in the relationships with the bot and bullies. 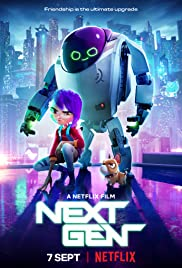 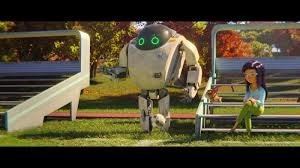 It tells the story of Mai Su, a lonely rebellious teenage girl living in a world where sentient robot technology is commonplace, and 7723, a top-secret weaponized robot, who, through a chance encounter, meet each other and form an unlikely bond that they must use to stop a vicious threat.

Zak, Cloe, Kiet and Fenzy are four unpopular kids from Earth who are not very good at sports. One day they find bracelets that have the power to transport them to another dimension. There they meet Tänpo, the master, who explains that the Zorn Empire is about to conquer the Multiverse. The Earth is in danger and, if they want to save it, there is only one way: they will have to overcome their weaknesses, learn the art of Sendokai to become warriors, and win the Great Sendokai Tournament of the Multiverse.

A group of four kids are transported to another dimension and drafted by a small, elderly alien, named Tänpo, to take part in a football-like tournament called Sendokai, which they need to win in order to prevent the Zorn Empire from conquering the Earth.

The main character, Zak, has spiky blond hair, and all four kids wear wristbands that allow them to transport back & forth between Earth and the other dimension/s, although Tänpo informs them that they must keep the tournament a secret from their parents.

Different balls are used in various episodes, but the ball they initially train with is a brown sphere surrounded by spherical teal enclosure. The kids gain powers in the other dimension/s, so all sorts of outlandish trick shots are possible.

Before any goals can be scored in the game though, the force field blocking the goal mouth must first be struck with the ball three times, at which point it vanishes. After that, a goal can be scored, and the first goal scored wins the game.

Not the answer you're looking for? Browse other questions tagged story-identification cartoon space or ask your own question.

4
Old 3d cartoon show about playing soccer in space to save earth from planet conquerors?

12
Book about 2 boys that time travel from 1980's (?) to Mayan (?) civilization with a Viking girl?
7
Anime/cartoon with kids battling with robots in a game
8
70's/80's anime where the heroes travel on a spaceship to rescue a princess
4
Anime/cartoon about two kids trying to depetrify all humans
4
Old 3d cartoon show about playing soccer in space to save earth from planet conquerors?