Was Stan Lee in the second diner scene in the movie Superman 2?

I have wondered for a long time if Stan Lee made a cameo appearance in the 1980 movie Superman 2. I believe that he is in the second diner scene of the movie and is the truck driver who is wearing sunglasses. He is sitting at the long front table in the diner watching Superman get his revenge against the truck driver named Rocky.

Here is a link to a YouTube video of this diner scene. This video shows the truck driver who is wearing sunglasses from other angles and it shows one close up of him.

Was Stan Lee in the second diner scene in the movie Superman 2?

Let's start off with the full IMDB credits. Everyone in the diner is listed, but there's no Stan Lee. There's two "man in diner" entries, and there's no photo for Bill Hibbert, who is apparently uncredited.

The second problem with this is Stan Lee is the long time writer, editor and publisher at Marvel Comics. He's had a cameo in virtually every Marvel Cinematic Universe movie and lots of other Marvel materials. Superman is one of the best known DC Comics characters.

This would be the equivalent of the CEO of Coca-Cola drinking from a Pepsi can in public.

I've done some more research on this question, and here's what I've come up with...

1) Stan Lee is not listed in the IMDB full cast & crew credits for Superman II.

Note that he is listed in the IMDB credits for Trial of the Incredible Hulk, even though he wasn't credited within the film itself.

2) Superman II is not mentioned in Wikipedia's list of Stan Lee's cameo appearances.

The earliest cameo listed on this page was in Trial of the Incredible Hulk (1989), a TV movie. His earliest listed cameo in a film which received a theatrical release was in The Ambulance (1990).

Here's a transcript of the commentary for that scene:

MANKIEWICZ: Now here again this is almost like you would do this in a Clint Eastwood movie. And I told Clint once, I never forgave him in Bronco Billy for not coming back and punching out that sheriff who threw him out of town early on in the movie.

MANKIEWICZ: Yeah, but you gotta be very careful, because this is Superman now, and he can't beat this guy up. So you play it for comedy and--

DONNER: Well, you play it straight.

MANKIEWICZ: Straight here, but Chris' one line: "I've been working out."

DONNER [Reacting to the trucker being spun around on his stool]: Tilt.

MANKIEWICZ [Reacting to Clark handing a wad of cash to the diner owner]: Again, you gotta be very careful that he pays for the damage, everything; this is Superman now.

4) Several websites state that Stan Lee's first ever DC cameo was in the animated feature, Teen Titans Go! To the Movies.

5) There are visible differences in physical appearance between that actor and Stan.

Here's a close-up of the actor in question, from the diner scene. 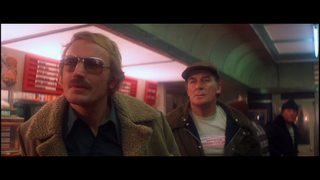 And here's a video of the diner scene.

Now here's a photo of Stan as he appeared around 1977, the same year the diner scene would've been shot (much of the footage for Superman II, including the diner scene, was shot by Richard Donner during the production of the first Superman film). This photo couldn't have been taken any earlier than 1977, as the Superhero Women book on his desk was published that very year. 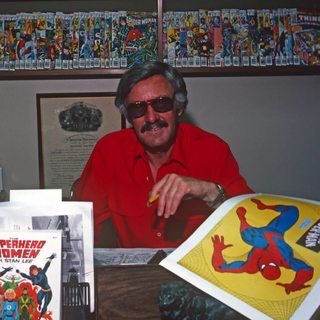 And here's a video of Stan making an appearance on CBC-TV's 90 Minutes Live in 1977.

As you can see, the actor in the diner scene appeared to have blonde hair, parted on the right side of his head, whereas Stan had dark, greying hair at the time, parted on the left side of his head. There are also differences in facial structure, particularly the nose and jawline, and the actor looks a bit younger than Stan, with a slightly heavier build. Stan was 56 years old at the time, and relatively slender in build.

6) I've been unable to find any clear indication that Stan appeared in Superman II.

I realise an absence of evidence that he was in the film doesn't prove he wasn't, but if he was in the film for the sake of argument, doesn't it seem strange that there'd be no clear reference to that fact anywhere on the Internet? Even if we suppose that he deliberately altered his appearance for this alleged cameo, so he could could sneak it past Marvel Comics, wouldn't it surely have been noticed and picked up on by various fans and industry commentators in the 40-plus years which have passed since? It's not like we're talking about some obscure, overlooked film here. It's also not like he was heavily disguised in the scene (if that was him, which I don't believe it was).

I'd say it is most likely not Stan Lee in that scene.

Stan Lee was left-handed. And you don't have to infer that fact from the photo of him holding a pencil (or cigarette?) in the other answer: 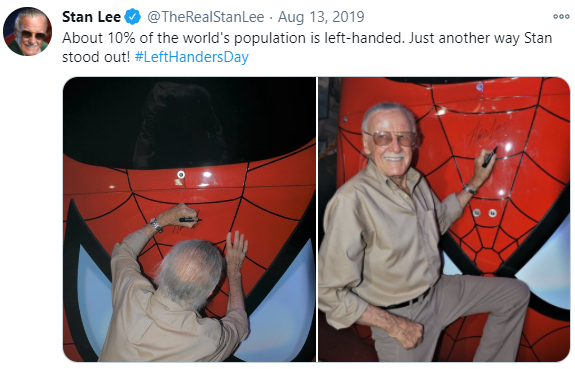 But the doppelganger in Superman II is holding an apple a ketchup container with his right hand: 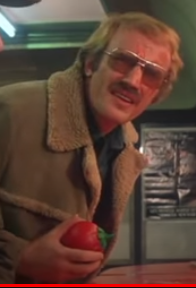 That is, by the way, his hand and not the hand of the guy with the hat, even though it might give that impression.

Also it doesn't look like the image in the movie was flipped left-right; aside from other details the hatted man's shirt has text on it.

Of course this is not 100% conclusive, people sometimes use their non-dominant hand, but I'd say it's a definite strike against the actor being Stan Lee.

It is not Stan Lee.

Why would Stan Lee (who ran Marvel Comics) be in a D.C. Comics movie?

There’s nothing much else to say. You might as well be asking why there hasn’t been a Star Trek / Star Wars cameo cross over. Like Spock beaming onto the bridge of a Star Destroyer and just saying “Whoops! Excuse me…” and beaming out again.

D.C. and Marvel are two 100% different companies that have always had a rivalry. And yes, there were attempts at cross-overs in the 1970s; but that was because the whole comics industry was collapsing and they were willing to do corny things like a Superman versus Spider-Man battle and such.

And yes, there were indeed some examples of cross-overs of characters in the years past the 1970s. But this is not a character cross-over that is being discussed here, but rather a cameo by the boss of a rival comic book company.

If this was Stan Lee it would be a known bit of trivia that would have been shared for decades because the Superman films in the 1970s were the only superhero films at the time. It would be massive if Stan Lee made a cameo in a D.C. Comics film since comics and films were not a thing back then and any appearance by someone as well known as Stan Lee would be noted immediately.

Also, this article on SlashFilm in 2018 explains it very clearly. The title of the article is:

“Stan Lee Makes His First-Ever Cameo in a DC Movie”

And his line in the film:

“This is Stan Lee — dig my subtle cameo! This is a DC movie? I gotta get outta here!”

The cameo was a joke explicitly about all of his cameos in Marvel Comic films.

Additionally, I found a pic of the same guy on this website called “Movie Dude’s Pictorial Filmography of Screen Actors!” (“Unnamed Extra 133”) and it does not look anything like Stan Lee: 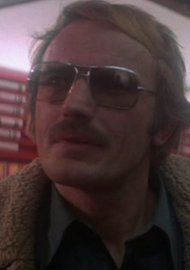 65
Is Stan Lee playing the Watcher in all his cameos?
8
What happens to Harvey Dent when the car turns over in The Dark Knight?
10
Why isn't Stan Lee in 2015's Fantastic Four?
26
Has Stan Lee ever made a cameo in a comic book?
3
Which version of Spider-Man does Stan Lee like the best?
15
Is there any significance to Stan Lee's cameo in the Incredible Hulk?
49
Did Stan Lee finish his cameo shooting for the upcoming Avengers 4 movie?
16
Were there two appearances of Stan Lee?
24
Is there a Stan Lee reference in WandaVision?