What do we know about the Mandalorian's Way? [closed]

Ask Question
Asked 11 months ago
Active 11 months ago
Viewed 302 times
6
Closed. This question needs to be more focused. It is not currently accepting answers.

Watching Disney's The Mandalorian, we got to know that Mandalorian isn't a race. It's a Creed. as uttered by Cara Dune and Din Djarin, also we heard several times Djarin and other Mandalorians on the show say: This is The Way (presumably of the Mandalore). What do we know about this Way and creed, whether Canon or Legends? Is it like the Jedi books or some sort of unwritten code of honor and conduct amongst Mandalorians?

Not a whole lot. We know:

That it's a fundamentalist interpretation of an ancient creed (the Way of the Mandalore) that isn't widely practiced by mainstream Mandalorian culture anymore.

A central tenet is the wearing of the helmet and not removing it in front of anyone. Having removed it, you're not supposed to put it back on anymore as you're no longer a Mandalorian.

The priest role is played by an "Armorer" who both makes/upgrades armor and weapons as well as interprets the "Way," whatever it may be at that time.

Word and agreements are important. Having entered into an agreement and given one's word, a Mandalorian is obligated to fulfill the terms and then never speak of it again. This is followed by Boba Fett, but notably not by Bo Katan.

Family and Clans are important. The pre-Empire leadership seems to be a parliamentary monarchy.

There is a custom of taking on orphans or parents separated from their families. Having done so, the Mandalorians either raise them as one of their own or returns them to their own culture, preferably their families.

Foundlings are both "Found" and can apparently Found a new clan if they face a trial and are judged worthy by an Armorer. A clan has a signet forged by an Armorer on their shoulder.

Armor and the metal beskar is considered sacred and is passed down through generations.

That's about it so far. 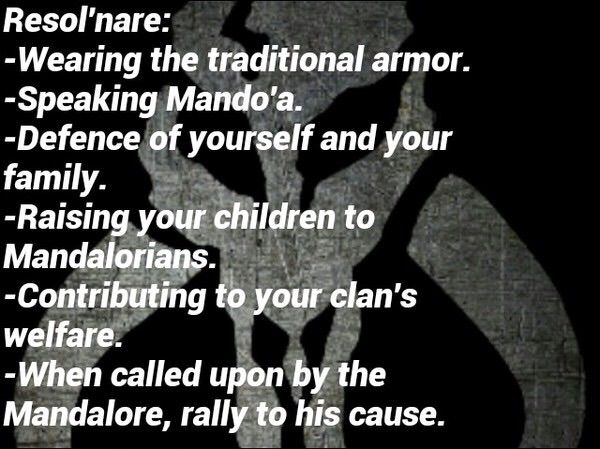 There is more about the Way of the Mandalore in Star Wars canon, and I will add more information when I can access it.

Not the answer you're looking for? Browse other questions tagged star-wars star-wars-legends the-mandalorian mandalorian or ask your own question.

13
Is It Possible To Impersonate Another Person Within The Force?
14
What did we know about the Kessel run before the prequels?
49
Is there an in-universe explanation given to the senior Imperial Navy Officers as to why Darth Vader serves Emperor Palpatine?
55
Why is a living creature being frozen in carbonite in “The Mandalorian” so common when it seemed so risky in “The Empire Strikes Back?”
9
Why is the Mandalorian's weapons locker on the Razor Crest so easy to open?
21
Is "Razor Crest" the name or the model of the Mandalorian's ship?
11
What is a chain code and how do they work?
13
How did Ahsoka know the specifics of Anakin's fall?
8
What does Din mean that weapons are a part of his religion?