Did Han Solo teach Princess Leia how to fly the Millennium Falcon?

Being both a Princess of Alderaan and a Galactic Senator, Princess Leia was most likely always a passenger onboard a starship whenever she traveled to another planet. Yet, in the the movie Star Wars: The Empire Strikes Back, there are two times that she piloted the Millennium Falcon.

The screen shot below shows a moment when the Falcon is skimming along the side of the Executor, Darth Vader's flagship, which is pursuing them and at this moment Princess Leia was piloting the Falcon. 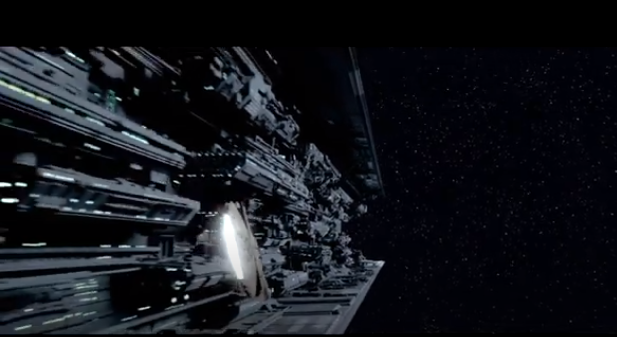 If it's true that she had never piloted a starship during her life on Alderaan, is it then safe to assume that Han Solo had taught her how to fly the Millennium Falcon?

I am thinking that Han must have given her piloting lessons while they were on the planet Hoth.

Leia is an accomplished pilot, as you'd expect of someone with latent Force potential and multiple years of training.

Someone’s prepping for a trip, she thought. Her mind worked at lightspeed, and she saw her escape plan unfold as clearly as if the Emperor himself had rolled out a carpet for her. Yes—a small thrill of victory raced through her. She could work with that. Her spirits lightened for the first time in hours, and she felt the crushing pressure lift off her chest. The shuttles would be fueled. And the shuttles were outfitted with weapons. She could blast her way out, and by the time they realized what was happening, she’d be through Tatooine’s atmosphere.

Take that! she wanted to shout to the other senators. She was about to prove exactly what she was capable of when given the opportunity to try. Her membership in the Rebellion still felt new, too fresh. She’d needed the mission to show them her dedication and how far she’d go for them if only they’d give her the support to get there. This—the story of her escape under Vader’s nose—would solidify her bond with them that much more. No one—not the media, not her aunts, not even her father—would be able to deny that she was a fighter and deserved to have her voice heard.

If I don’t get shot out of the sky first, she thought. No—she could do it. She’d had years of flight training. And, well, there were all those dunes to hide in. Let’s see how Vader liked getting gritty sand in sensitive places in his armor.

Flying a rustbucket like the Falcon would seem to present some element of difficulty (due to Han's under-the-counter modifications) but not to the point where she wouldn't be able to fly it.

You might want to note that the new (canon) junior novelisation for Empire Strikes Back suggests that Han simply gave her control in the escape scene and expected her to know how to fly. There was no "teaching" but she still did a good job of it.

Han jumps from the captain’s seat. “Take it!” he shouts at Leia.

He ignores her and runs to the mechanical port, where Chewbacca is already yanking at wires and crying in confusion. (Which sounds like “Arrrrraaaaragh!”)

“Oh, boy,” Han mutters. He slides into the pilot’s seat, relieving Leia of her duties—which she performed more than admirably, it should be said, for the TIE fighters are now some distance behind—and stares at the death trap that stretches out before them.

The Empire Strikes Back: So You Want to Be a Jedi?

195
Was the Millennium Falcon too slow?
34
How did Princess Leia pay Han Solo's reward in Star Wars: A New Hope?
55
Why did Darth Vader choose to take shots from Han Solo?
14
How could Han Solo possibly fall for Luke's con?
28
How did Luke suddenly know that Leia was a "Princess"?
8
Did Han Solo shoot Darth Vader’s TIE Fighter wingman from the cockpit of the Millennium Falcon?
15
Why do people keep referring to Leia as Princess Leia, even after the destruction of Alderaan?
11
What is the timeline of the rescue of Han Solo?