Looking for a two-book sword & sorcery series I read in the early '80s. I think I discovered it via a character write up in Dragon Magazine, so the books likely were published a while before I found them. Feel-wise I think they were too grim & gritty to come from as far back as the 60s. I think it was one story arc over two books rather than two completely separate stories, although there were several discrete sub-stories in the middle. It may have been a fix-up book stitching together a bunch of shorts.

Background stuff. More or less chapter one basics leading to the Adventures

Our Heroine, "Rivka" (<= low confidance. That seems too biblical, but I'm going with it), is a horse nomad shaman-swordswoman and daughter of the clan-chief.

Rivka's magical calling is gender appropriate, but a woman learning the sword is blasphemous. Anther clan ambushes and destroys her clan and poisoned the clan wells.

Some specifics that I hope will narrow things down

Adventures in civilization frame around a cat & mouse chase with an evil sorcerer. I don't remember how they connected or how it finished (presumably she beat him and was then able to return home), nor if he was chasing her, she was chasing him, or a bit of both. She'd adventure in one locale then move on either in chase or in flight to the next story.

She hooks up with a potential love interest but leaves him because she doesn't want to become civilized enough to settle down with him.

She spends time in an abbey where she discovers that her patron deity is the Warrior aspect of a triple-goddess.

At the end she returns to the desert to prove her acceptance by the goddess. She miraculously cleanses the clan wells fouled in the initial chapters.

Outside of Rivka and the evil sorcerer there isn't much magic, and her magic is primarily low key - divination via rune-stones and healing rather than flashy fireballs. Combat-wise she's primarily a physical warrior.

I believe I had this shelved on the top shelf of my childhood bookshelf, so the author's name is likely early in the alphabet. I'm highly confidant this isn't Asimov.

I have vague recollections of the book covers being beige or brown with Rivka on her horse wielding a scimitar and dark blue or black with a red splotch - possibly a ruby set lighthouse style in a wizard's tower. The name of the dark blue one may be similar to the "Black Tower", but I'm low confidence on that, and it's not any of the "Black Tower" books I can find record of.

Lynn Abbey: Daughter of the Bright Moon and The Black Flame

The heroine's name is Rifkind, not Rivka, and the second book is called The Black Flame rather than The Black Tower, but otherwise, everything fits, even your description of the covers.

The Goodreads description of Daughter of the Bright Moon:

Priestess, healer, warrior, witch. In a desert world ruled by men Rifkind has always been one apart. A chieftain's daughter, she has learned to wield a sword while all other women are bound by tribal custom to children and the cooking fire. While other women are chattel to their men, Rifkind has been Marked by the Goddess for Her own. When her clan is massacred, Rifkind's essential solitude is only confirmed. Alone, prompted by her Deity, she sets forth on a quest for her destiny, a destiny that will shake and shape the world...for An-Soren waits in his dark tower knowing that she must come to him in time. 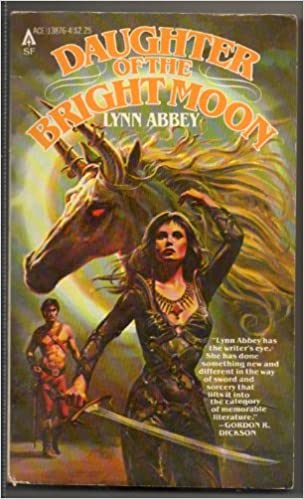 And of The Black Flame:

Priestess, healer, warrior, witch, Rifkind rode out of the Asheeran desert alone but for the Goddess of the Bright Moon, to whom she owed her allegiance. Alone she faced the strange new world of "civilization"; alone she drove herself beyond all endurance to wrest the secret of her destiny from the all-powerful enemy who had that secret to teach. And she survived. Now new challenges beckon Rifkind from the comfort of life at Castle Chatelgard with the man she had thought she would love: to the untracked swamps of the Felmargue, said to be under a curse too powerful for even the gods to lift. In the center of that land of harsh magic, on a plateau no visitor has lived to describe, the Well of Knowledge survives; source of the Lost Gods' power, and of the Black Flame itself. In battle to the death with the powers of the Felmargue, Rifkind will be driven to the brink of mistrusting her own Goddess - and she will meet a man who for the first time makes her mistrust herself. 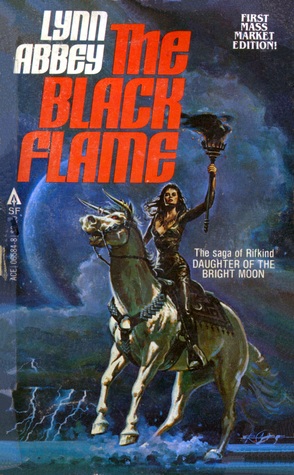 9
Looking for fantasy book about a boy who meets a tribal girl who turns out to be a shifter
10
Fantasy novel, one armed protagonist
8
1980s or earlier fantasy novel series, female warrior main character
3
Looking for title or author of a fantasy novel with large, tusked goat-like creatures as mounts