Science Fiction / Fantasy book involving a young woman hired to read Tarot cards for a local lord, ends with her killing his brother for him

I read this somewhere in the later 1990s as a paperback book. The main character, at the start, does Tarot readings in the marketplace. I think there was an early scene where a fight to the death (sanctioned by the government with them being from opposing families who'd paid for the privileges) messes up her reading. She's a former student (from Earth?) who got trapped on the planet because she missed her return flight, and she's hoping to save up enough money for a ticket off-planet. Eventually, she's approached by a local lord who gives her his own deck to read. Satisfied with her reading of it, he hires her. It transpires that he relies on the Tarot readings to guide his business (magic being something that works on this planet), but he's been cursed to be unable to read his own cards. I remember she was none too fond of him at the start, but starts warming to him, at least until an incident where her accumulated money is burned up in a fire at her residence. She's convinced he arranged for the fire to ensure that she wouldn't leave the planet, but she also learns that one of the card readers before her died in a fire, implied to have been caused by a rival who wanted to deprive him of intelligence.

At some later point in the book, she meets his family, including the acerbic grandmother who put the curse on him. She's give the "gift" of an obsidian cat, which I believe is stated to be a handwarmer, but which carries a deadly curse if touched with bare skin. She also meets the lord's brother, who is paraplegic, but intelligent and charming. Something happens that leads to said lord being kicked out of his house. He's either injured or despondent, but he's largely unresponsive, so she takes to supporting them via her readings. I remember she becomes fond of a coffee-like beverage that someone warns her will stain her teeth. Oh, and when the lord starts talking to her again, it was to complain that she was begging for food (I think she was getting it from a local temple) and there's a comment about it tasting like sawdust. I think she also starts training in a staff-based martial art, maybe named something like The River? I think there's a metaphor going on with the slower Tai-Chi like movements being a slow-moving stream and the acrobatic kicks and strikes being like a set of rushing rapids.

Near the end of the book, the aforementioned paraplegic brother shows up and challenges the lord to a fight to the death for leadership of the family. I think he was using some sort of magic to allow him to walk for a time, which was done by drawing power from volunteers. He has the upper hand in the fight until the protagonist meets him between rounds (they'd been friendly up to that point) and after establishing that he will not back down, she tosses the cat to him. He has a moment of horrified realization as he catches it, before she sinks a knife into his heart, which is considered to be a valid way to settle the duel since she's considered part of the family. She also acknowledges her attraction to the lord, and I think the book ends with her becoming his wife.

One other thing I remember about the setting is that they have weapons named something like "heat pens" that generate a hot spot at the end of them. I think one might have been used in the fight at the beginning and it also showed up later in the book.

I later learned there were sequels, and I know I read one of them, where the protagonist was learning the magic of the world. Other than that, all I recall was that she's kidnapped and near the end, it's revealed that her captor had her under a "love spell", but since the only thing the spell can do is create symptoms, she doesn't realize she's under one, assuming that her increased body temperature and racing heart around her captor were due to fear and adrenaline.

I recalled the name of the world where it was set, Ivory, and that led me to The Gate of Ivory by Doris Egan. 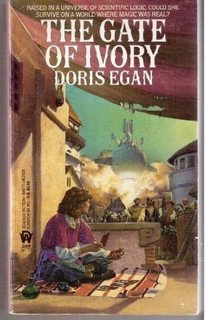 THE SCIENCE OF MAGIC ---

is what lures people from all over the galaxy to the world of Ivory. Ivory, exotic and dangerous, where everything is for sale, and law exists only to protect the most powerful families. And to anthropology student Theodora of Pyrene, Ivory --- the one place in the known universe where magic works and where those who command it can control society --- is an irresistible world to explore on her all-too-brief vacation.

But cut off from her companions and her ship, attacked and robbed, Theodora's short pleasure trip soon becomes a terrifying odyssey. For on Ivory all her studies and training are useless, and Theodora is forced to turn to fortune telling to survive. To her amazement, she discovers that she actually is gifted with magical skill, a skill that will plunge her into deadly peril, when she becomes involved with Ran Cormallon, one of the most powerful sorcerers on Ivory --- and a man whose unknown enemies will stop at nothing, including spell-murdering Theodora, in their campaign to destroy Ran and seize his power!

I found I had an ebook copy on my computer and I got some of the ordering of things wrong. Theodora does her reading for Ran at the very beginning of the chapter, he's explicitly not part of the nobility (just from a very rich family), and the fight doesn't happen until later (although it does involve the "hotpencils").

I was laying down cards in the marketplace when I got the latest job offer. "Here comes money," Irsa, the vendor next to me had said and moved out of the way so as not to scare him off. So I'd given him his fortune, all the usual sort of nonsense, and out he came with this. I hadn't expected it of him; he looked too respectable. True, he hadn't mentioned the exact nature of this job. But I'd been in the Square long enough—I thought—to know what that meant.

"Thank you, noble sir." I was as phony as any other market fortuneteller.

She shrugged. "It's a risk. If you—" A man in a red embroidered robe leapt suddenly on an older man in brown who had been fingering the bronze cups in an adjoining stall. The two fell, pushing Irsa's cart back and upsetting one of her piles of fruit. She pulled the cart back farther as they scrabbled on the ground. She was standing perfectly still, her eyes following two rolling pellfruit across the dirt. The man in red had a hotpencil, which he pressed against the other's temple. The victim's face contorted. "It's not fair," he said, in a shaking voice. "You weren't—supposed to—"

"I was within touching distance," said the man in red.

The other was dead. Irsa went to pick up her pellfruit, stooping with a look of disgust on her face. "Aristocrats, both of 'em," she said as she returned to me, one large round fruit in each hand. She raised an arm to wipe sweat off her face with the back of her robe. "You'd think they had better places for that sort of thing. Why, dear," she said to me, "you look a bit scretchy. It's all this sun, makes everything seem more important than it is. I know you weren't brought up to it, dear, but so what if two fools choose to end their quarrel in front of us? It's happened before, it will happen again. Ishin na' telleth!" She looked around for something to give me to cheer me up, and ended by giving me what she gave anyone in distress: a piece of fruit. It was all she had to offer.

Indeed, her predecessor died in a fire:

"I didn't get very far, though." When he didn't reply, I said, "Why did the cards become hot? And what about that building on fire—"

"A temporary problem, I'm sure—it may have something to do with your predecessor in this position. She was involved in an accident, which is why I had to find a replacement."

The martial art was named "The River"

The River. That was my first day, my introduction to the way of movement that was sa'ret. We did the Old River first, the flowing stretches and bends of a river that wound over well-known lands. And we did the Middle River, the balancer; you use the staff most in Middle River. We finished with the Young River, the current with wild leaps over rock and down canyons.

And indeed, she kills Eln, although it was an onyx cat that was used to cool hands, and I misremembered how it worked:

But Annurian of Kado Island knew very well. "Eln," I said, and I took my hand from the pack strapped to my side and tossed him a round, black object. He caught it neatly. It was the onyx cat. Fresh from my bare hands, the scent of it all on its stony skin: the tenderness and the understanding and the gratitude, the hatred and the wish to end all this. An emotional confusion more than equal to his own. He looked up from the cat, his dark eyes widened in surprise. "Theo, sweetheart—" he said. "I can't—" And he looked down at his chest, at the knife handle suspended there, and I looked down, too, at my empty fingers and the empty sheath under my robe. "Theo," he said again. The bluestone pendant was a fire against my skin. I ignored it.

Ran pulled me out of the arena. The Duelmaster was talking, making some kind of announcement. "The Cormallon matter has been settled privately," I remember him saying; "Thank you for your time and attention."

Search terms that got me there: novel ivory tarot

10
A book about young adults kidnapped and sent to a harsh planet to colonize it?
17
Man dies in space but his head is preserved, later reanimated with a robotic body
13
Book about a shapeshifter hunting the women of a family
8
YA book about a girl with multicolored hair who possesses some kind of power
11
Trying to remember the name of a book I read in the 90s
6
Book about a girl who finds her magic through the help of time travelling witches
12
Novel where a girl, Sre, hatches a dragon, Blue, to defend her from an innkeeper
2
Teenage book about a girl falling in love with a bad-boy ghost
5
YA horror mystery book with mentions of witchcraft and Joan of Arc