80's post apocalypse book, two biological catastrophes at the end of the war

The story centered around US government remnants, some years after a war with Russia.

The twist revealed at the end was that the war was actually mutual due to two biological catastrophes.

In the US, a cure for diabetes was release that proceeded to spread and kill anyone who was not diabetic. In the USSR a genetically engineered weed was unkillable by pesticides and was spreading like wildfire and destroying farmland.

The US invited the USSR to nuke their cities to stop the virus, the USSR invited the US to use their space platforms to alternately freeze (via sun blocking) and burn, via laser, the farmland.

The Steel, the Mist, and the Blazing Sun. A novel by Christopher Anvil. (According to Wikipedia, that was a pen name; his real name was Harry Christopher Crosby.) First published by Ace in 1980, and reprinted by them in 1983 and 1986, which fits your recollection that it was an "80's" book. 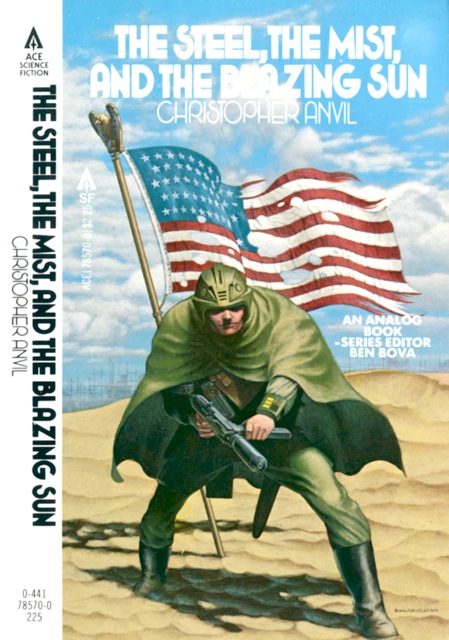 I was very fortunate in that I never stumbled across a secondhand copy of this novel until after I had read Anvil's much shorter story, "Ideological Defeat." I'd encountered it in the military SF anthology Guns of Darkness, Volume VI of the pessimistically-titled anthology series There Will be War.

I call this a lucky break because Arakal, the military leader and main protagonist of The Steel, the Mist, and the Blazing Sun, was introduced in "Ideological Defeat," in which he masterminded a military campaign which overcame the somewhat-better-equipped Russian army that was trying to conquer more of the Eastern Seaboard of North America than the portion it had already occupied. As you indicated, these characters lived in a post-apocalyptic future where both sides had previously taken horrible losses in what the readers were led to believe had been the nuclear war which everyone had been afraid would mark the sudden end of the Cold War.

By the end of the story, the Russians no longer had an active field army running loose in North America (although many of their soldiers had been captured alive and would be given the chance to become members of the "O'Cracys," i.e. the cultures which were collectively descended from the democracies of the USA and Canada), and Arakal was busy capturing the Russian fleet, as well, in preparation for a transoceanic counterattack against Europe. (Most of which had been dominated by the Russian Communists since the end of the big war which had done horrible damage on both sides of the Atlantic.)

The Steel, the Mist, and the Blazing Sun describes the subsequent military campaign, still masterminded by Arakal, which overruns a good chunk of Europe and ultimately leads to some fascinating discoveries about what had really happened in the devastating "war" of several generations earlier. Very few people had ever known that it hadn't exactly been a case of "we are going to destroy each other's civilizations in a ruthless war, just because someone panicked and pushed the big red button." The truth was very much as you have described it from memory, so I am sure this is the same post-apocalyptic military science fiction novel, and not just something coincidentally similar in its depiction of a future clash between the descendants of the Americans and the Russians after a devastating war.

What I found most annoying about The Steel, the Mist, and the Blazing Sun was that the dialogue referred (especially toward the beginning) to Arakal's previous victory as proof of his rare military genius -- when it would have been so simple to just reprint "Ideological Defeat" as the first bit of that book, and yet the publisher (Ace) couldn't be bothered to take the trouble to incorporate it for the benefit of all the prospective readers who (unlike me) had never even heard of Arakal before, and would rather see him demonstrating his ability to stay a few moves ahead of his adversaries, instead of just seeing people lecture each other on the subject of how wonderful he was.

However, a little online research tonight has shown me that eventually this mistake was corrected by a different publisher (Baen) when the first story and the sequel novel were incorporated into a much larger collection of some of Anvil's fiction: War Games, first published in 2008, and available on Amazon in various formats, including a Kindle e-book.