A misshapen, hunchbacked fellow was doing a main-bad-guy final-act routine in front of a group of kids who I assumed were the heroes and several dragon heads shot out on long necks from his hump. He was about to win, when a new character appeared out of nowhere (I seem to remember he had been a dragon before, apparently a nice one.)

The evil sorcerer's eyes widened in puzzlement and he asked the other one how come he was here. The new character, a bespectacled, apparently rather nice fellow, explained that it had suddenly occurred to him that two persons could not exist in the same place — and so there he was.

As the evil one called forces of magic to his aid, the bespectacled guy called upon physics, geometry, logic, mathematics (each by name) or other scientific disciplines. Each time he named one, a dragon head from the bad guy's hump popped out of existence and the evil sorcerer shrank. After invoking a number of scientific names, the bad guy was defeated. I think the victor, after a chat with his friends, returned to his home world (very similar to our own) and that was that.

I got a definite Dungeons & Dragons (the TV animated series) vibe from it, but that may just have been me making connections and assuming from similarities (fantasy world, kid heroes, maybe someone from banal Earth who is transported to the fantasy world, and I think it looked more like western animation than Japanese, but I might be wrong on that).

This is the Rankin-Bass straight-to-video film The Flight of Dragons (1982). It aired as an ABC Saturday Night Movie on August 2, 1986. 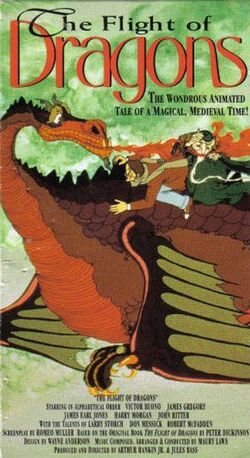 I believe this image is from a videotape cover.

From the Wikipedia Article:

The Flight of Dragons is a 1982 animated fantasy film produced and directed by Jules Bass and Arthur Rankin, Jr. loosely combining the speculative natural history book of the same name (1979) by Peter Dickinson with the novel The Dragon and the George (1976) by Gordon R. Dickson. It stars the voices of John Ritter, Victor Buono, James Gregory, James Earl Jones, and Harry Morgan. The film centers upon a quest undertaken to stop an evil wizard who plans to rule the world by dark magic. A major theme within the story is the question of whether science and magic can co-exist. This is told mostly through the experience of character Peter Dickinson, drawn from the 20th century into the magical realm.

Peter Dickinson spends some time in the body of the dragon Gorbash, and winds up explaining the flight through chemistry.

In the climactic scene, Peter thwarts the wizard Omnadon by denying all magic, ultimately resulting in his banishment back to the 20th century.

There doesn't seem to be an obvious connection to the Dungeons & Dragons cartoon series beyond the general fantasy milieu.

There do appear to be trailers online for the movie, such as the one here, but the ones I could find attribute the production to Universal Pictures rather than Warner Brothers, and may be fan-made.

20
Fantasy novel about kid who finds out the 'evil warlock' is his father?
19
Book about Dragons Ending (Turning to stone)
8
Looking for title of 1990s movie from memories of scenes
5
Fantasy book with shape shifting dragon warriors
1
Help identify Animated Fantasy TV Series
25
Identify a fantasy series with ancient wizard who was training a young hero to fight a sleeping evil god
5
1980s fantasy cartoon, heroes go in an underground realm and free the oppressed locals, after three trials (man-eating passage, spider people, dragon)
4
Show with a group of people, fighting evil people from Dark Dimension
3
Isekai manga with a school bus having been transported to a different world