Looking for title of collection of short-stories involving tank/tank battles. Pretty sure it had a tank on the front cover.

#1: Injured soldier stuck in a cave on Mars (or another planet) has verbal back-and-forth with a malfunctioning sentient tank that is just out of kill-shot range. The story ends when the tank realizes it can disable safe-guards, get a running start, and lob a shell/grenade the extra 50ft needed to kill the human. Tank registers satisfaction that the annoying radio emissions from the human have stopped.

#2: Enhanced super-soldier has been retired/exiled to a remote security enclosure out in the wilderness. Society used him for combat, then discarded/were afraid of him after the war. A female assassin-type somehow eludes security protocols and gains entrance to his compound. We realize that she's there because the super-soldier killed her brother - who was a brain-in-a-tank, on the other side during the war. Lots of back-story, regrets, enlightenment, etc. She dissapears one morning, leaving the device that allows the super-soldier to escape his confinement. 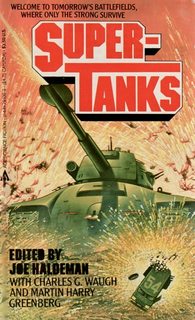 It contains the story I Made You already id'd by Valorum, and has a tank on the front cover.

The other story is Encounter by Stephen Leigh. It has the enhanced soldier exiled to an enclosure and the female warrior who comes after him. She, her husband, father, and brother were all "animatanks during the war...our brains wired to the machinery while our bodies slumbered at home." The enhanced soldier killed the husband and brother and "crippled my father and me".

Not the answer you're looking for? Browse other questions tagged story-identification short-stories military-sf or ask your own question.

11
Robot tank run amok, its trainer trapped in cave on the Moon