How does R2-D2 — or any astromech droid — routinely get into and out of a T-65 model X-Wing in the timeline of the original trilogy?

The T-65 model X-Wing uses an astromech droid — such as R2-D2 — to handle miscellaneous tasks required to pilot an X-Wing: Tasks like navigation, small repairs, assist in piloting and such. Astromech droids are used in similar ways for other small craft such as the N-1 Starfighter or Jedi Starfighter shown in the prequels where they mount themselves from the bottom of the craft.

But this question is specifically about the T-65 model X-Wing where there is simply not enough clearance beneath the X-Wing’s fuselage for an astromech droid to roll underneath and mount themselves.

How exactly do astromech droids — such as R2-D2 — get into that droid hole in the back of the X-Wing to begin with?

For example, this is what I know about R2-D2 and X-Wings as seen in the original trilogy:

That said, under normal circumstances — for any X-Wing fighter; not just Luke’s — how does an astromech droid safely get out of an X-Wing get back into that droid hole?

The warranty expired on R2-D2’s rocket jets/boosters by the time of the Galactic Civil War so they could not be used in the original trilogy films.

FWIW, I fully realize that R2-D2 is shown using rocket jets/boosters to fly around in Star Wars: Attack of the Clones (2002); something that droid has never done in any of the Star Wars films before. But as this other question/answer thread explains, R2-D2’s jets/boosters stopped working — and the warranty expired on them — by the time the events of the original trilogy happened so they could no longer be used:

“Rescinding previous consumer documentation that guaranteed a ‘lifetime’ of reliability in their after-market astromech hover rockets, Industrial Automaton has now capped the warranty at 20 standard years. This decision affects all optional R2, R3 and R4-adapted leg-bracket and barrel-housed propellant rocket systems. IA is instead recommending feature swap outs after 20 years, regardless of actual logged hours of operation.”

Additionally, this bit of trivia on R2-D2’s operational state is official canon as well; bold emphasis is mine:

“However, by the time of the Galactic Civil War, R2-D2’s boosters had not worked in ages, and his warranty was long expired.”

So rocket jets/boosters can be ruled out… Unless there are non-movie references to them being used by astromech droids to get into and out of an X-Wing out there?

For reference, these pics…

Here is R2-D2 being lifted into the droid hole of Luke’s X-Wing fighter. 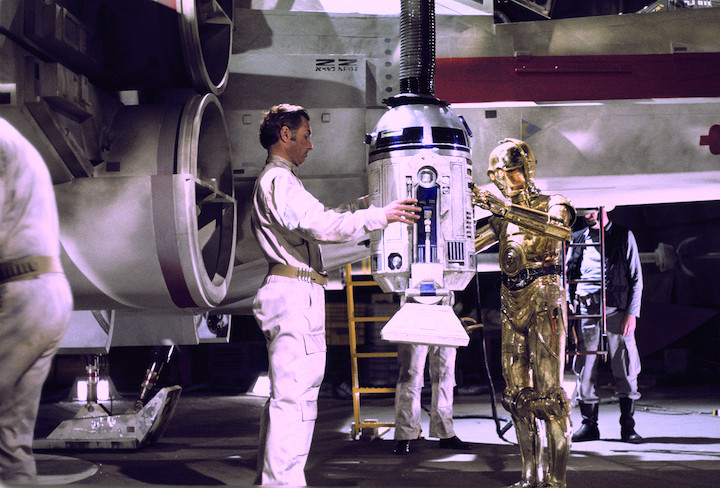 And in this picture, R2-D2 lifts himself out of the droid hole after Luke crash lands on Dagobah. 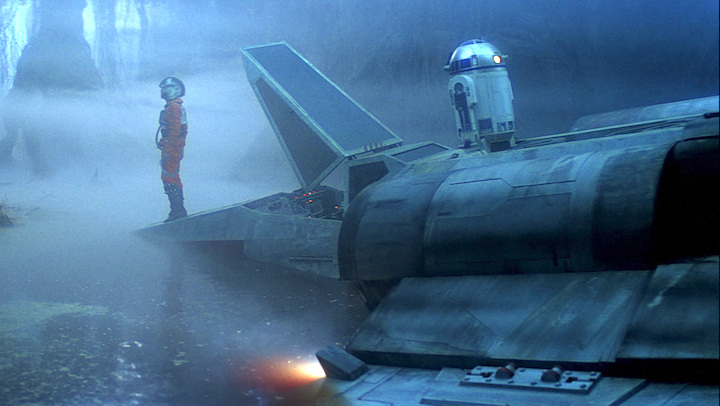 Presumably, whenever possible, a droid will be lifted into place the way R2-D2 is shown being inserted in A New Hope. However, The Empire Strikes Back does show evidence of what appears to be a backup mechanism. When R2-D2 has to be reseated for the departure from Dagobah, it can be seen that he is attached to his compartment by a cable. The cable is clearly visible at 0:10 in the clip below and the still.

With guidance from the pilot, this cable could presumably also be used to winch the droid up onto the top of the X-Wing. 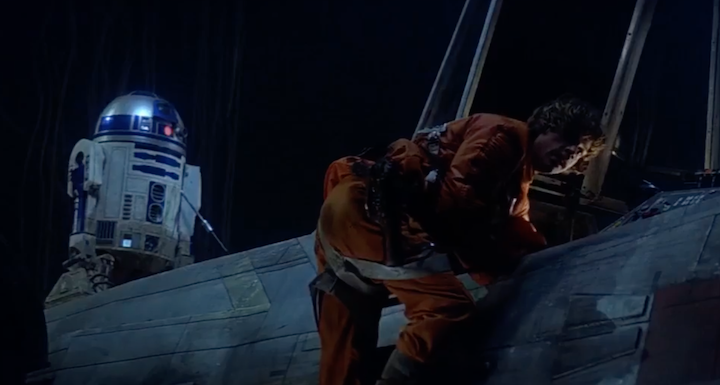 While I'm not aware of any cases where R2-D2 has been seen exiting an X-Wing in the current canon, Book One of the so-called 'Thrawn Trilogy', Heir to the Empire has Luke revisiting Dagobah in chapter 10 and using the Force to lift R2-D2 down to ground level after the droid exited the socket on his own.

Most likely Luke could have done the same following his training under Yoda considering he was able to levitate Threepio and the chair he was sitting in in Return of the Jedi.

R2-D2 has retractable rocket boosters built into his legs. While he's never explicitly shown using them in the original trilogy, we see him using them in a fight with some battle droids in the prequels.

While he's only shown using them to hover and light his enemies on fire in that sequence, it's entirely possible that his manufacturer's intended use for them would be to use them to launch himself up and into the astromech droid socket of a fighter, when lifting devices weren't available.

65
Why did R2-D2 not fly in Return of the Jedi?
113
Why Can't R2-D2 Talk?
24
Was Luke Skywalker technically a deserter in ESB?
45
Does R2D2 Try to Trick Luke in Episode V - Empire Strikes Back?
17
Expecting visitor Luke Skywalker on Dagobah, Yoda was?
21
Why did Princess Leia choose R2-D2?
26
Did any non-rebels regularly fly X-Wings?
17
Can an X-Wing fighter comfortably accommodate additional passengers?
15
Did Luke lose his X-Wing on Cloud City?