I remember seeing a book in my elementary (or possibly middle school) library that I would like to locate again. It was something that I wanted to read, but then I think the book disappeared, so I never got to. The physical book did not look new when I saw it in the 1980s, but my elementary school was only built in the 1970s, so there is a good change it was published between 1970 and 1985.

I think the blurb on the back was what interested me, or maybe I read the first few pages. I think the main character was an human teen, who had grown up as an alien on a planet mostly inhabited by uplifted animals. Now, the planet was about to be invaded by "aliens" (actually other humans), and he would find himself torn between the invaders and his animal friends.

The paperback cover, as I recall, had a white background, with some dark and unrealistically colored images of a person against a background that I couldn't recall. I think it had a kind of overall psychedelic look—which again probably points to a 1970s publication date.

Tor just had an article about Andre Norton's 'Iron Cage'. A human slave escapes mind-control aliens, and has his own mindmind-control powers. Is taken in by bear-like aliens and helps them fend off hostile human explorers. 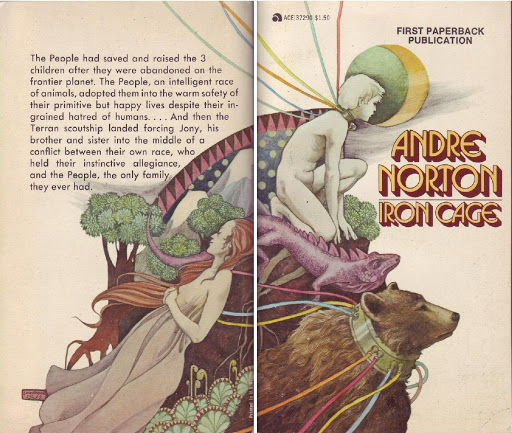 I'm going to put Andre Norton's Catseye (1961) out there. The original cover might be close to what you recall, and books did tend to hang around in libraries for a long time in those days. (I recall reading A Treasury of Great Science Fiction at the library only a few years earlier, and it was still in good shape.) 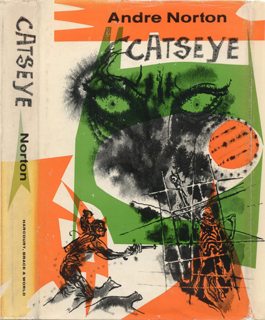 The hero, Troy Horan, a young refugee stranded in the Dipple (a permanent refugee camp) finds work in a pet store, and discovers that some of the animals can talk to him. The animals are being used as spies by the owner using a control device. Troy escapes with the animals to the wilderness, where they have to survive and escape the people who are pursuing them.

Norton's work in general, and definitely this novel, would usually be considered YA in most libraries of my youth.

The back-story presented in the novel describes the first contact between the Shonunin and humans, which occurred when a damaged human probe with five crewmembers entered the Shonunin's home system. The contact, however, turned violent. It was not clear who fired the first shot, but the Shonunin, who had only recently put themselves into space, chased the crippled human ship for two years (the ship had lost the ability to jump through hyperspace) before overpowering it. Having suffered losses themselves, the Shonunin killed all the humans aboard. They knew the probe had been sending messages out of the solar system and the Shonunin, incapable of interstellar travel themselves, now feared retribution from the technologically superior humans.

A Shonun, Dana Duun Shtoni no Lughn (Duun), was charged with the task of saving the Shonunin world from the potential threat the humans posed. Duun's solution was to raise a human child to adulthood who could serve as an emissary to his race and hopefully prevent a major conflict when humans return to the Shonunin system. Scientists cloned one of the dead human crewmembers to produce the male human child, whom Duun named Haras, meaning Thorn. Raising a human in their midst, an alien and the enemy, sparked fear among the Shonunin, but Duun elected to undertake the task himself, uncertain whether the creature would turn on him.

The novel is set during the period following Thorn's birth, and the first chapters concern Thorn's infancy and early childhood. As Thorn grows, Duun trains him according to the ways of the warrior Guild to which Duun belongs, the Hatani. The Hatani are a class of warrior-judges revered by most Shonunin, and Duun believes that raising Thorn under the Hatani code will be the best possible preparation for the boy's eventual ambassadorial duties. To be Hatani is to be respected but isolated. But by raising Thorn to be one of their Hatani, he makes Thorn part of the framework of society, not an isolated experiment.