How does Diana change into her Wonder Woman costume so quickly?

In Wonder Woman 1984, there is a car chase scene where Diana and Steve Trevor are trailing several military vehicles. At the beginning of the chase Diana is in her "street clothes". Things are not going well so she decides that she needs to take more direct action in the chase. The camera focuses on one of the military vehicles for just a second, and in the very next shot we see her in her Wonder Woman attire going into battle. It seemed that she only had maybe 3 seconds maximum to make this change of clothing.

Since she was sitting in the front passenger car seat, I'm not convinced that she had the opportunity to "spin" into her outfit... is there an in-universe explanation for this rapid costume change?

Presumably, she just used her superhuman speed to change outfits quickly, as she's been known to do in the comics. 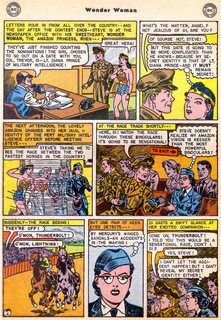 We see Diana slip out of her shirt just before she exits the car, which suggests she had her costume on beneath her civilian attire, much as Superman typically does. She just needed to remove her civilian clothing within a few seconds, and since she clearly has a decent level of superhuman speed in the DCEU (as she does in the comics), that would seem to be well within her capabilities. Plus, for all we know, she could've been removing her trousers and slipping her boots on in some of the earlier shots, where only the top half of her body was visible.

It's worth noting that Diana's powers were beginning to fade at this point in the film, but she was still quick enough to see a speeding bullet move through the air, and latch onto it with her lasso, as well as outrun moving vehicles.

She was wearing her Wonder Woman outfit underneath her clothing.

Moments later, the cab was peeling back onto the road, now with Steve driving. Diana quickly shucked off her civilian clothes, revealing her Wonder Woman costume underneath. Slipping her tiara on to keep her hair out of her face, she leaned out the passenger-side window.

Not the answer you're looking for? Browse other questions tagged dc dc-extended-universe wonder-woman-1984 or ask your own question.

15
How did Wonder Woman change into her outfit work on the 1970's TV show?
5
Where does Wonder Woman conceal her bracelets when she's dressed as Diana Prince?

25
Can anyone, including Wonder Woman, resist the Lasso of Truth?
5
Why didn't the Amazons kill Steve during the beach fight?
5
What did Steve Trevor actually plan for?
8
Does this character lose powers at the end of Wonder Woman 1984?
1
Why does only one character get electrocuted in this scene in Wonder Woman 1984?