What was the fate of Luke’s landspeeder?

Luke and Ben and the droids make it to Mos Eisley and mind trick their way past the troopers. That’s the last we see of the land speeder.

Was it just a loss that Luke wrote off when they had to flee Tatooine on the Falcon? Or did Luke take time to sell it for some extra cash between the cantina mess and the craziness in the hangar?

There was a scene in the original screenplay that addressed this. Luke sold it to a 'used speeder dealer'. Beyond this, its fate is unknown.

Ben and Luke are standing in a sleazy used speeder lot, talking with a tall, grotesque, insect-like used speeder dealer. Strange exotic bodies and spindly-legged beasts pass by as the insect concludes the sale by giving Luke some coins.

LUKE: He says it's the best he can do. Since the XP-38 came out, they're just not in demand.

BEN: It will be enough.

Ben and Luke leave the speeder lot and walk down the dusty alleyway past a small robot herding a bunch of anteater-like creatures. Luke turns and gives one last forlorn look at his faithful speeder as he rounds a corner.

Some of Luke and Ben's dialogue made it into the film, but not the used car speeder dealership, which was deleted, presumably because it adds little to the plot.

hat tip to Megaptera novaeangliae for the reminder.

We learn in the junior novelisation that he sold his speeder for 2000 Imperial credits (described in the original novelisation as "a number of small metal shapes").

The scene made it into the Marvel comic adaptation, issue #2

We have some additional info about the creature that purchased the speeder, a vuvrian called Wioslea. The company that she worked for was called Spaceport Speeders.

The negotiations were captured in the Star Wars Radio Play.

Luke Skywalker: I want to sell this speeder.
Obi-Wan Kenobi: If we can get a fair price.
Luke Skywalker: Yeah. I paid twenty-four hundred for it, and I put a lot of work into it. I think it's worth a lot more.
Wioslea: Fifteen hundred is all I can offer you, human.
Luke Skywalker: Fifteen hundred? Look, this landspeeder's in great shape, even if it's not very pretty.
Obi-Wan Kenobi: We can accept no less than two thousand.
Wioslea: Your grip on reality is fragile, humans. It's the newer models that are in demand now, not these old ones. I shall probably have to sell it at a loss.
Obi-Wan Kenobi: But it's still not a fair price.
Wioslea: You touch a responsive chord in my… charitable nature, humans. Sixteen hundred.

And it was confirmed in the EU novel Star Wars Journal: The Fight for Justice that Obi-Wan used a Jedi mind-trick to convince Wioslea to pay precisely what the Jedi needed to pay for passage off the planet.

We left Solo and Chewie at the cantina and headed over to a used speeder lot with Artoo and Threepio. As usual, the dealer tried to cut us down in price, and Ben's use of the Force saved us again. We needed two thousand for Captain Solo, and that's what Ben got us. I'm sure the dealer's going to wonder why he was so generous when he recovers, but he can still sell the landspeeder at a profit, so we didn't feel too badly.

The speeder ended up being purchased from the used speeder lot and used by a racer called Wade Vox in the game Star Wars: Demolition. 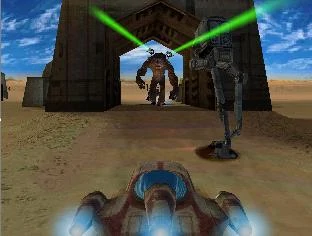 We have confirmation from Star Wars Insider #50 that this was indeed Luke's speeder.

At the end of the game Wade is killed and the fate of the speeder is unknown, but presumably it ends up in the possession of Jabba the Hutt.

It's shown that he sold it to pay for their passage on the Falcon.

LUKE: Look at this. Ever since the XP-38 came out, they just aren't in demand.

Tatooine Manhunt, a WEG D6 Adventure, has the option of buying Luke's landspeeder from the Speeder Salesman, selling it along with others to the PCs.

Spaceport Speeders is a repulsor vehicle shop that rents, sells, and buys land- and airspeeders. In fact, Luke Skywalker’s landspeeder is on sale — for 4,000 credits! Other than that, there are only two landspeeders available — an old Mobquet A-l and a rebuilt Ubrikkian. The heavy influx of bounty hunters has cleaned the shop out. Three bumbling, rather inept-looking bounty hunters haggle with the shop owner about the price of Luke's old vehicle, and Zardra (see the pullout) eyes the Ubrikkian when the PCs reach this encounter. She greets them with a chilling smile, and finishes her purchase

Not the answer you're looking for? Browse other questions tagged star-wars a-new-hope luke-skywalker or ask your own question.

5
How much was Luke's speeder worth?
25
Why does Luke say he's okay with having to sell his speeder?

24
What "Earth-Origin" animals exist in the canon Star Wars universe?
10
Why is C-3PO driving the landspeeder?
8
Why did Luke leave his landspeeder when Sandpeople were coming?
20
What color is Luke’s lightsaber blade?
35
Did Obi-Wan ever pay Han Solo? If so, where did he get the money?
57
Did Luke really not know about Mos Eisley spaceport in the original “Star Wars” (1977) film?
51
What made the Tusken Raiders unable / unwilling to shoot down Luke's Landspeeder?
10
Why did Obi-Wan Kenobi leave the droids unguarded while stormtroopers were looking for them?
6
What is the Physical Distance Between Mos Espa and Mos Eisley?