Why were there THREE actors for Nien Nunb? (Lando's Sullustese co-pilot in ROTJ)

While answering this, I ran into a strange fact: 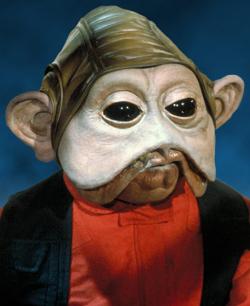 Now, we know that Kipsang Rotich was an African student who voiced the character.

But why are there two more actors listed for a three total? (e.g. Darth Vader had one actor for voice and one for body).

According to this article on Wookieepedia:

The character Nien Nunb was realized as a puppet for his appearance in Return of the Jedi. He was performed by Mike Quinn and Richard Bonehill. Mike performed the acting in the cockpit, which was a large animatronic hand puppet and Richard was the extra who was in the full body suit.

They had shot some of the background walk-around Nien scenes with the extra, Richard Bonehill, already by this time.

I was looking at one of the masks and was fiddling with it. Then, Phil said that some scenes were coming up with this guy in the Falcon and now he had to speak dialogue. The problem was that he hadn't been designed and built for that. They were thinking they could put air bladders in his cheeks for movement, but his mouth and eyes were static and the only way around it was to cover his mouth with one of those oxygen masks. That's why there are a few pictures that have this. Also, you'll see the Nien scenes in the briefing room he has this hanging from his neck. I put my hand inside the mouth and began moving it like a hand puppet. Phil liked what he saw and suggested it to George.

19
Are any of the alien languages in Star Wars real Earth languages?

22
Which Actors Were Featured in Both Star Wars Trilogies?
22
Star Wars RotJ: why was the Executor chosen as a target?
38
Why were so many Jedi risked to save so few (three)?
3
Why did the clone pilot armor go through three phases?
10
Were Asian actors cast for native Jedha citizens for a reason?
4
Are there any other Force users remaining in the galaxy by the time of RotJ?
18
Why didn't Holdo use auto-pilot?
12
Were there any contemporary sources (prior to RotJ) that confirmed that Darth Vader was telling the truth to Luke?
11
Were these Star Wars characters voiced by their original actors?
5
Is there an explanation for why the Vong were not included in the rebooted Clone Wars?