I'm pretty sure this was on the Playstation, either that or the Nintendo 64. I remember watching someone playing a bit of it my freshman year of college. Fairly primitive graphics by today's standards, but probably pretty decent at the time, blocky polygons and a short draw distance. There was a male protagonist and a female protagonist. I don't remember if you got to choose which one you played, or if it was a "player 1 / player 2" thing, but one was a fairly large man with some sort of polearm, maybe a spear or a trident, and the other was a woman with a sword. I want to say that they both were dressed in somewhat archaic Japanese clothing, but the setting felt more European, with stone-walled buildings. They were fighting demons or monsters of some sort, and I think there was a mixture of outside (city streets) and inside (buildings) stages. I think they also had some magic, but the primary method of fighting was using mêlée weapons.

I think it was at some point ported to the PC, and I picked up a copy (I'll admit, through illicit means, probably Limewire) and didn't get very far in it.

I want to say that the title of the game was two words, something like Strange Creatures... and that actually found me the game. Posting the answer.

The game is Nightmare Creatures. It was a 1997 release on PlayStation, Microsoft Windows and Nintendo 64 platforms. 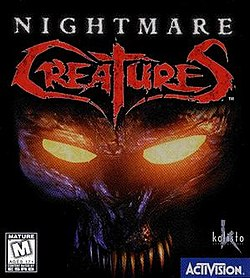 The story behind Nightmare Creatures draws upon gothic horror elements of the 19th century and begins in 1666, when a devil-worshiping cult called the Brotherhood of Hecate were conducting sinister experiments in London so as to take over the city, and then the world. The Brotherhood tried to develop an elixir that would endow them with superhuman powers. However, rather than creating their intended superhumans, their experiments instead created grotesque monsters called nightmare creatures. When they decided to use these creatures as an army of conquest, one of their members, Samuel Pepys, set their headquarters on fire, resulting in the First Great Fire of London.

The game takes place in 1834 when London falls victim to several evil occurrences. Monster sightings are reported along with news of people mutating into ungodly creatures, and that the dead are waking from their graves and walking among the living. All of London is in a panic and vulnerable to the schemes of Adam Crowley, a mad scientist and occultist enlisting the help of the Brotherhood.

A book is dropped off at the home of Ignatius Blackward, a priest and occult expert. He finds it is the lost diary of Samuel Pepys, which contains the Brotherhood's research. Knowing he needs help, Ignatius sends the diary to a renowned American immunologist named Dr. Jean Franciscus of New Orleans, who shows up with his daughter, Nadia Franciscus. With the doctor murdered and the book stolen, Ignatius and Nadia are at his funeral, where they are approached by a man who gives them a note reading: "Know about Adam Crowley, Brotherhood of Hecate --- HVHJ." Ignatius and Nadia head out to an address listed on the note, hoping to seek out Crowley and neutralize the monsters.

A single-player only game, Nightmare Creatures allows the player to control either Ignatius or Nadia. Secondary weapons such as pistols, mines, fire bombs, and magic spells can be used in addition to each character's primary weapon. The game features an optional adrenaline bar which causes health to be lost if it runs out, and players are forced to continuously seek out and win battles to keep the adrenaline bar full.

I was wrong about how they dressed.