Animated series involving a dimensional portal in a movie theater, and other worlds, including one populated with zombies

The characters are three teenagers; two are male, and one is female. One of the males is the leader, and the other is somewhat fat and always worried. The female might be Asian (I don't recall), but I do know that they work in a movie theater where they entered other dimensions, and the portal to those worlds is the giant movie screen that's in the theater. The main villain is some guy who owns a restaurant right next door to the movie theater.

I remember one episode; it starts with them in a world where everyone are zombies, and the virus came from a food store. One of the members eats the food from that store and turns the two others, gets out, and finds a boat to get to a military base. But the female member gets infected, and rides a zombie shark after the leader of the group, who is on the boat. That's all I've got left of my memory.

I'm 17, and I watched this animated series when I was ether 10 or 14. Could you guys help me figure this out, please? I tried looking it up, but didn't find anything.

I remember another series which might be the one you ask about. I didn't remember the title, so it took a lot of searching though lists of programs broadcast in the USA by Cartoon Network, Nickelodeon, and the Disney Channel to find the title of the program which was mostly broadcast on Disney XD.

When Penn Zero's parents are lost in a different dimension, Penn has to take over their jobs as part time heroes. Penn and his friends are sent from a laboratory in an abandoned movie theater into a different dimension, alternate universe, or alien planet each mission to prevent various crimes and disasters.

Penn's friends and part time side kicks are Boone Wiseman who is male and overweight, and Sashi Kobayashi who is female and of Japanese ancestry.

They usually have enemies to fight, mainly part-time villain Rippen who hopes to be promoted to full time villain, and his rather friendly and stupid part time sidekick Larry. Rippen is the art teacher at Penn's high school and Larry is the principal.

I don't remember the specific plots you mention but I only saw part of the series.

Matt Hatter is an ordinary child who discovers that the monsters of his family's horror movies are alive in another dimension called "the Multiverse", controlled by the nefarious Lord Tenoroc. This dimension can only be accessed through the Notting Hill Coronet, his family's movie theater. With his grandfather Alfred trapped inside the Multiverse, Matt, along with his new friends Roxie and Gomez, must capture the movie monsters, save Alfred, and restore peace to the Multiverse. 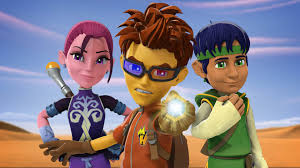 Not the answer you're looking for? Browse other questions tagged story-identification zombie animated-series or ask your own question.

7
Book with glowing green liquid that keeps injured teenage girl alive
15
Sci Fi action movie where an elite group of people control business through a game they play online
14
Zombie Outbreak movie with a cure
6
Animated movie or TV series including floating islands and ships
16
Movie with talking zombies, one zombie eats his own arm
4
90s animated series with the 2 robots merging into one in a ship in the end
5
Movie: in a big seaside city time travel portals open to the apocalyptic future with the fading sun and zombie mutants
4
Novel where one of the protagonist's informants is an intelligent zombie who lives in a movie theatre