I'm looking for a spinoff/alternate universe version of DC comics. I don't remember all the details but I do remember that the big Justice League members (Batman, Superman, Wonder Woman) are all dead. The heroes that are present (they have the same powers but don't really share the same designs) are the Flash and Green Lantern along with a few others, but they have new / different backstories (the Flash inherits the powers of the god Mercury as he's dying, and Green Lantern gets his powers by being blessed by the Earth somehow?). If it helps, the color palette was a bit more muted and greyed out than in a lot of other comics.

Superman, Wonder-Woman and Batman are killed fighting Parademons. Mercury passes on his powers to Jay Garrick (the Flash) and Alan Scott (Green Lantern) is chosen by the Earth Spirit as her champion. 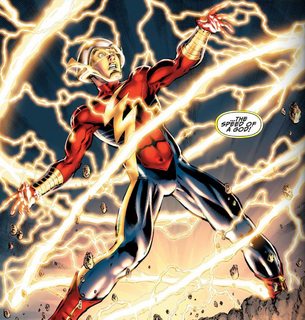 Not the answer you're looking for? Browse other questions tagged story-identification dc comics parallel-universe or ask your own question.

14
The New 52: What Titles Don't Mix Continuity For New Reader?
9
Can The Flash breathe in outer space?
6
What's up with Guy Gardner's Yellow Ring?
23
What are the Justice League members’ weaknesses?
6
Can a power ring leave a wielder?
9
Did the Justice League poster intentionally use the same style as a graphic novel collection?
4
Can the Green Lantern ring be used to locate a nearby power battery?
2
Is the Batman who Laughs storyline in "Dark Nights Metal" part of its own story?