Are there any unexplained allusions among the captive minds in Lovecraft's "The Shadow Out of Time"?

In H. P. Lovecraft's 1936 novella "The Shadow Out of Time," the protagonist Nathaniel Peaslee has his body stolen temporarily by a time-traveling mind belonging to one of the Great Race. During the five years that the intruder uses Peaslee's body to study early twentieth-century Earth, Peaslee himself lives on in his captor's original body, one hundred fifty million years in the past. 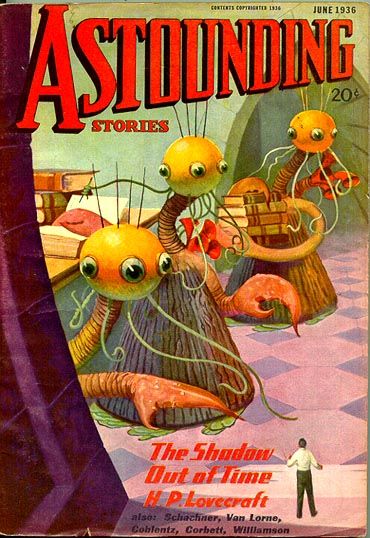 Recounting the memories that he recovers of his strange imprisonment, Peaslee describes many other displaced minds that he meets. He first lists a number of non-human captives, who are in a similar situation to his own.

There was a mind from the planet we know as Venus, which would live incalculable epochs to come, and one from an outer moon of Jupiter six million years in the past. Of earthly minds there were some from the winged, star-headed, half-vegetable race of palaeogean Antarctica; one from the reptile people of fabled Valusia; three from the furry pre-human Hyperborean worshippers of Tsathoggua; one from the wholly abominable Tcho-Tchos; two from the arachnid denizens of earth’s last age; five from the hardy coleopterous species immediately following mankind, to which the Great Race was some day to transfer its keenest minds en masse in the face of horrible peril; and several from different branches of humanity.

Many of the entities mentioned come from other tales written by Lovecraft and his correspondents, the first generation of contributors to the Cthulhu Mythos. The aliens from Venus and the moon of Jupiter are not sufficiently described to make them recognizable. However, the list does clearly include:

However, the last two I do not recognize as coming from other sources:

There are also a few more races mentioned later in the narrative:

The race of intelligent beetles (or "coleoptera") may well be original to this story, since they play a more prominent role in the long-term fate of the Great Race than any of the other types mentioned. However, they might previously have been written about elsewhere, and so might the arachnids and others. So, were these one-off creations that Lovecraft threw into the story, or did any of them originate is previous Cthulhu Mythos works?

The next paragraph after the one quoted above lists a number of specific human minds that Peaslee meets among the captives of the Great Race. A number of them come from recognizable historical periods (e.g. a twelfth-century Florentine monk, a quaestor in Sulla’s time), but there are several fantastical ones as well.

I talked with the mind of Yiang-Li, a philosopher from the cruel empire of Tsan-Chan, which is to come in A.D. 5000; with that of a general of the great-headed brown people who held South Africa in B.C. 50,000;... with that of a king of Lomar who had ruled that terrible polar land 100,000 years before the squat, yellow Inutos came from the west to engulf it; with that of Nug-Soth, a magician of the dark conquerors of A.D. 16,000;... with that of Crom-Ya, a Cimmerian chieftain of B.C. 15,000; and with so many others that my brain cannot hold the shocking secrets and dizzying marvels I learned from them.

Among these, two are clear allusions to other works:

However, the others I find illusive. All the unidentified proper names ("Yiang-Li," "Tsan-Chan," and "Nug-Soth") appear to have been reused by later writers, themselves homaging Lovecraft. However is not inconceivable that Lovecraft may have intended some of the civilizations he mentions as homages themselves:

Are any of these peoples references to other authors or works?

I don't know if there are any more references to other authors, but looking for connections to other Lovecraft stories, "the cruel empire of Tsan-Chan" is a callback to his 1919 story "Beyond the Wall of Sleep", which mentions it as existing 3000 years in the future (the story had a present-day setting, so presumably around the publication date), and like "The Shadow Out of Time" the story also mentions intelligent aliens on a moon of Jupiter:

It is not permitted me to tell your waking earth-self of your real self, but we are all roamers of vast spaces and travellers in many ages. Next year I may be dwelling in the dark Egypt which you call ancient, or in the cruel empire of Tsan-Chan which is to come three thousand years hence. You and I have drifted to the worlds that reel about the red Arcturus, and dwelt in the bodies of the insect-philosophers that crawl proudly over the fourth moon of Jupiter.

The story "He" from 1926 also contains a brief glimpse at the future of Greenwich when it is occupied by "yellow, squint-eyed people", presumably meant to be Asian, so it's possible he intended this to be a picture of an era when the "empire of Tsan-Chan" ruled the world:

For full three seconds I could glimpse that pandemoniac sight, and in those seconds I saw a vista which will ever afterward torment me in dreams. I saw the heavens verminous with strange flying things, and beneath them a hellish black city of giant stone terraces with impious pyramids flung savagely to the moon, and devil-lights burning from unnumbered windows. And swarming loathsomely on aerial galleries I saw the yellow, squint-eyed people of that city, robed horribly in orange and red, and dancing insanely to the pounding of fevered kettle-drums, the clatter of obscene crotala, and the maniacal moaning of muted horns whose ceaseless dirges rose and fell undulantly like the wave of an unhallowed ocean of bitumen.

I saw this vista, I say, and heard as with the mind's ear the blasphemous domdaniel of cacophony which companioned it. It was the shrieking fulfilment of all the horror which that corpse-city had ever stirred in my soul, and forgetting every injunction to silence I screamed and screamed and screamed as my nerves gave way and the walls quivered about me.

Not the answer you're looking for? Browse other questions tagged cthulhu-mythos the-shadow-out-of-time or ask your own question.