Movie in which two men ask a dragon three questions

I'm trying to remember the name of a movie in which two young men ask a dragon three questions. I remember that one of the men asks the dragon, "Don't we get three questions?" The dragon responds, "Yes, but now you have only two remaining." Or something along those lines.

What movie was this from?

I think this may be the Earthsea miniseries.

With the help of Ogion, Ged confronts the Gebbeth and attempts to drown him using a rock, however, it escapes with Ged's likeness and voice. Ged's impersonator becomes a murderer, and Vetch, a magus himself, chases Ged until he realizes Ged is not possessed by the Gebbeth and they decide to hunt it together.

They are attacked by the dragon, Orm Embar, but Ged uses the dragon's true name to bind him and ask three questions. He wastes his first question, but with his second, he learns the Gebbeth's location. The dragon tells him where to find the two pieces of the Amulet of Peace, which when reunited would save Earthsea, but Ged could have asked the true name of the demon.

Here's a clip at the relevant part.

In case that gets taken down, here's a screenshot with them and the dragon around that point: 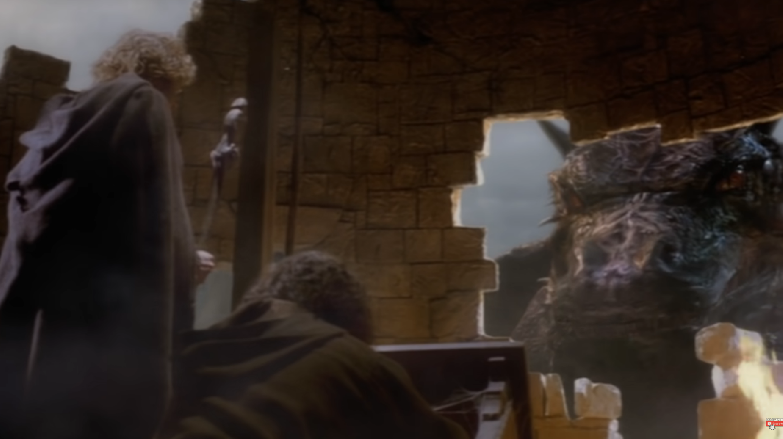 Not the answer you're looking for? Browse other questions tagged story-identification movie dragons or ask your own question.

20
Story about girl who must become REAL to inherit throne
3
Film identification: Two men using equipment to play metal CD-like discs
5
Book-Identification: Axe wielding protagonist and a dragon
59
Movie about a boy, two men, a robot and a war
6
80's alien movie: young boy finds and protects a glowing alien green rock which becomes his friend
7
Movie with a dragon born in an underground laboratory