Off hand, the stupidest story I ever read and why I wondered even then why my mom bought me comic books or I guess slightly thicker sort of graphic novels (but I don't think this was exactly a graphic novel). The boxer wants to go up a weight class or something and figures if he takes the whole bottle of weight-gain pills at once he will gain weight faster which indeed he does; in fact, the surface of the earth no longer supports his mass (he becomes denser but not fat) and he falls through the surface deep underground.

The kicker is, he meets giant moles who want to use the man as a sparring partner and that becomes his fate -- boxing against giant moles (not mole people but giant, intelligent rodents) underground.

EDIT: Looking at the artwork at the link the answer provided, they apparently were humanoid creatures, not giant moles. I remembered that part wrongly.

I found a reference to it on Google books here. It's the story Save Me From the Mole Men by Paul Reinman in the comic Tales to Astonish #16: 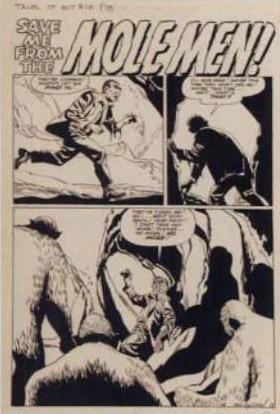 A boxer needs help to become a heavyweight, and breaks into an experimental lab to steal pills that hadn't been tested yet, but were supposed to make a person instantly gain wait. While escaping, he takes the entire bottle, and the building's floor can't hold his weight.

He keeps falling through floors until he finds himself in the realm of the 'Mole Men', who immediately begin to beat on him. He dodges a few of their punches, and they become impressed with his speed. They imprison him and force him to become a sparring partner for all of them.

It's a Marvel comic and Marvel have a free seven day trial for their online service that you can use to read it if you want.

15
What is the Difference Between a Comic and a Graphic Novel?
7
Identify this futuristic graphic novel/comic book focused on interpersonal conflicts
5
Sci-fi comic/graphic novel about augmented reality and intrusive advertising / microtransactions and telepathy
7
Sinister themed comic/graphic novel containing the Book of Revelation, Apocrypha, ravens, the Four Evangelists
6
Sci-fi adventure graphic novel: girl and her giant mouse companion face various robots, including a spherical one and one with many tendrils