I'm looking for a YA book (I'd guess aimed at 12+, but I'm not very sure. No romance, and the characters were children/young teens, but it was quite scary).

I probably read it in 2004-2008(ish). It was a short-medium paperback, taken out from a village library in England. It was fairly modern, with mentions of theme parks and televisions, but I don't remember mobile phones, so I'd guess written before 2002/2003.

I'm fairly sure it was written in the first person.

It followed best friends (two girls, possibly neighbours, one red-headed) whose bodies were taken by some old ladies who lived nearby who turned out to be witches. The girls had to get their bodies back by a certain time, or the switch would become permanent.

At one point, one of the girls was drugged by something given in a glass of milk. One of the glasses had teddy bears around the rim, and the other had something else, maybe flowers. She was attempting to drug the witch, but somehow the glasses were swapped. Potentially at this point, she was the only one who noticed her friend's body had been stolen and this was the point she lost hers.

On the final day, the witches tried to stay out of the house until after midnight (when the spell would become permanent), by getting the parents to take them to a theme park and eat out. They got back just before midnight though, and I think were asleep in the car, before being carried in.

The girls knew that they had to surround the house with gold to break the spell, and did it by wrapping a ball of yellow/gold wool around the house. I think the spell is successfully broken, but I can't remember what happens after that.

I've googled several times over the years, but with no luck. I know the middle of the story, but not the beginning and end. I'm hoping it jogs somebody's memory, or somebody can suggest good key words to try.

The Stolen by Alex Shearer. 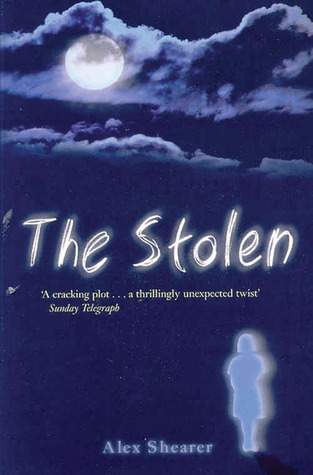 Life's a game—and someone's cheating. Meredith is a new girl at school. An orphan, living with her elderly granny. She must be lonely—or so Carly thinks, trying to be nice. But sometimes nice doesn't work. Sometimes people are worse than you could ever imagine. And Meredith has a secret—a story Carly can hardly begin to believe, about a girl with no future and someone else's past, a vicious old lady who refuses to die, and a young life stolen. For Meredith is not Meredith at all.

There is a searchable copy of the book on Google books here. For example if you search for milk you'll find the scene where the protagonist is trying to drug the witch. The two glasses actually have ballet dancers and dolphins on them:

The old lady carefully handed us our glasses of milk. To Meredith she gave the tumbler rimmed with ballet dancers. She handed me a tumbler which had little dolphins on it. One of them had a ball balance on its nose.

8
YA short horror story from the 90's? Student obsessed with teacher kills herself Cover art had a ghostly looking girl wearing fish necklace
12
Man hears whistling and footsteps from a ghost on his stairs
3
Book Identification: Noone house
9
What was the name of the tv show about a guy who lives in a town with aliens disguised as humans?
2
Animated show (or movie) aimed at young girls. Blonde female with glove with green(ish) crystal
33
Novel about a man who has his car stolen and is cryogenically frozen with his cat?
9
2000s movie, including an alien with 8 humanoid bodies and single hive mind