I played this somewhere in the early 90s, I think, downloaded off of a Bulletin Board System and played via a direct connection over the phone lines the twice I actually got to play. It might have been run on Windows 3.11, although that would have been the right timeframe for us to have moved on to Windows 95. The character plays a two-legged robot or mechsuit with weapons. I remember one of them was a laser gun that showed up as two lines that converged from akimbo arms to converge on a point in front of the player. Their opponent is another robot which differs only in color (I think red and blue?). They move around in a maze, trying to destroy each other. The game was in pseudo-3D, I think using layered sprites to represent the corridors. Movement was from space to space, and turning happened at 90 degree intervals. I can't remember what other weapons might have been used, although I want to say there was another weapon that was effective at a distance (missiles?), but was much slower, allowing for a bit of balance between trying to tag someone at the end of a hallway and then ducking away versus sneaking up and blasting away at them.

I don't remember much about the interface. I don't know if there was a map of the maze being displayed to help players find their way.

There was no real offline play, at least in the shareware version I played, with a completely inert opponent to be found and defeated.

I was trying to find a way to describe the graphics style, and came upon Maze Wars, which is kind of a direct predecessor to this game, with this one having similar gameplay, but a more limited amount of people participating, and somewhat advanced graphics.

Rough idea of what the robots were styled like 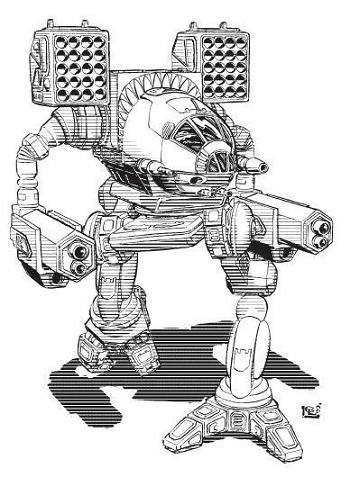 Like this, but colored, and only seen from front, back, and side views.

Thanks to Razmodian's answer, I was able to find the game, Megatron VGA. 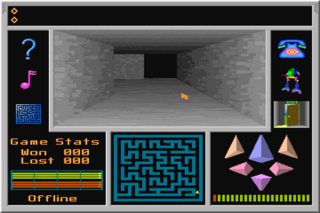 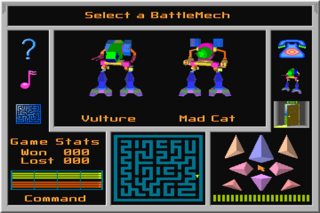 It is available to play online at the Internet Archive, which also has a better description:

In Megatron VGA the player sits in the cockpit of a large walking tank, similar to those from FASA's BattleTech universe.

The player can walk around in a first person perspective through maze-like environments similar in technical presentation to Eye of the Beholder (the player can only walk in fixed steps of a single 3D tile). Controlling multiple different weapons the player must destroy enemy mechs before they try the same. Separate shields on the front and back of the mech must protect players from getting destroyed instantly.

The player can choose between different mechs and multiple difficulty levels. A map of the level is shown at the bottom of the screen at all times, but the player can only detect the enemy when he's in radar range.

When I was searching for screenshots from Future Cop: LAPD, it brought me to myAbandonware.com, which had a tag for Battlemech games, so I scrolled through until I saw this one.

Not the answer you're looking for? Browse other questions tagged story-identification video-games mecha or ask your own question.

9
1990s Overhead view game involving post-apocalyptic gangs, including yuppies who propel grenades with tennis racquets
11
PC video game involving floating islands doing aerial combat
12
Space exploration/RPG PC game where humanity is trapped in a space bubble
4
Color Computer 2 fantasy game with maze and a selection of magic and weapons
10
Space-themed MS-DOS game with top-down perspective, crumbling bridge, and ghost-like aliens
6
PC Game (DOS?) with crude 3D sphere graphics, ability to play a male or female against creatures in a European town
25
NES game with town building between RPG/Hack-and-slash levels
7
Video game with a black female police officer who starts out fighting gangs, but then fights “Men in Black” with sci-fi weapons, and eventually demons
5
Early 2000s sci-fi game which begins with a castle being attacked and forcing the player underground; it had jet packs and futuristic weapons
1
Adventure game based on Japanese mythology including when you die, you're stuck in (Buddhist? Shinto?) hell and have to escape to continue