I cannot remember if the title of the book has tea cups in it, or the book series. The series was never finished due to the author passing away. It is fantasy and comedy and has a fire wizard who lights his pipe by covering his head in a fireball, and a super powerful wizard named Vic, who is senile, and a possessed statue of the true king, and I cannot think of the name....cry. It is an old book; the author also wrote a campaign for dungeons and dragons, if I remember correctly. Please help.

You might be thinking of Another Day, Another Dungeon (published in 1990), the first book in Greg Costikyan's Cups and Sorcery Series. The second and final book in the series is called One Quest, Hold the Dragons.

According to this review, the story involves a fire mage, and a statue of a king with a soul trapped within it:

Another Day, Another Dungeon is a hilarious book by Greg Costikyan that describes a treasure hunt in the legendary Caves of Cytorax. Timaeus De’Asperge, a fire mage, and his companions fight Rog, a huge beast, and get its “nice comfy pile of gold”. They proceed to find a life-sized statue of a man in the altar of an evil temple. It is made of solid athenor, the most valuable metal in the world due to its ability to store mana. They bribe the guard to get in, but nothing of that value can be kept secret and soon their home is a battlefield, their friend kidnapped, and the statue gone — but only they know that. They find out that the statue depicts the last human king, Stantius III, and that the scepter of Stantius is glowing — the sign that a new king has arrived.

Suddenly, they are on a quest to not only find the statue, but to bring it to Arst-Kara-Morn, where the people will do anything to destroy them. They must somehow reverse a spell at Arst-Kara-Morn that has entrapped the soul of Stantius III inside the statue, preventing any more human kings from coming. This series is a great one to read and one I would highly recommend.

And according to this TV Tropes article, it also features:

Vic, the senile old man who tells long, pointless stories and begs for spare change, turns out to be the last polymage, a type of sorcerer thought to have died out more than ten thousand years ago.

The author is apparently not deceased, however. 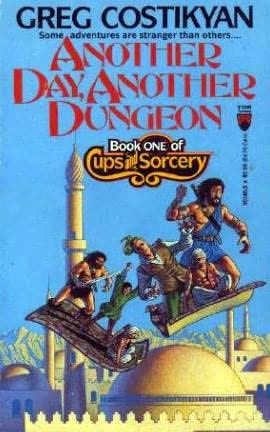 Not the answer you're looking for? Browse other questions tagged story-identification books magic wizards or ask your own question.

15
What is the book series where people become “Forged”?
18
Magic is based on words of power, which series?
10
Fantasy Book possibly titled 'Iceworld'
5
can anyone tell me the name of the sci-fi book series with a concorde like spaceship on the cover?
4
Fantasy novel series where an orphaned boy living as a commoner regains his inheritance
7
Trying to remember the name of a short scifi story about a biology experiment in space
3
Old, possibly unfinished, book series with evil aliens, pirates, gladiators
6
Fantasy novel about a world with mechanical dragons
9
Science Fiction/Fantasy paperback where a phoenix bird ate jewels like rubies and emeralds