Cartoon episode where a character's prosthetic arm turns him evil

I remember watching an episode of a cartoon on TV sometime between 2009 and 2013. I don't remember what channel I was watching it on, but it was almost certainly a rerun.

In it, a character who was missing an arm (or perhaps just a hand) had a prosthetic arm given to him by one of the other characters. The arm then for some reason turned him evil, with the end of the episode having the characters removing the prosthetic from him (and maybe destroying or sealing it).

Does anyone know the name of this show?

JohnJohn
2711 bronze badge
New contributor
John is a new contributor to this site. Take care in asking for clarification, commenting, and answering. Check out our Code of Conduct.
add a comment  |

Could it be an episode of Venture Brothers centered around Billy Quizboy who has a prosthetic hand? Although the actual origins of his prosthetic hand are not revealed until later in the series there is an early episode where different characters recount how they believe he got his hand and the various different scenarios around it are shown as a series of vignettes which encompass various tropes such as the evil limb. 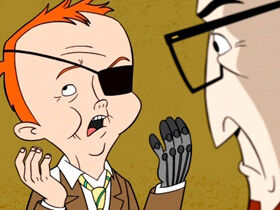 14
Five teens have rings that give them elemental powers
10
90's horror movie with a robot living on the ceiling in a house and turns evil
8
Cartoon where the main character had a cannon built into his arm?
9
2000's cartoon where a six-fingered pianist gets his extra finger(s?) removed for the girl he likes
9
Cartoon series about a boy having nightmares
5
Cartoon MC: 2 boy and 1 girl fight evil
4
Anime/cartoon about two kids trying to depetrify all humans
5
Evil scientist, cyborg cats and lot of unusual things