So this has haunted me for 20+ years. I turned on the television, ca 1995 I guess, and saw this cartoon where a male character, a teen I think, controls this huge white robot whith a joystick. The white robot is fighting a black robot. All the time the boy is yelling and screaming and as I remember it the boy also started crying, don't remember why.

I believe it was a cartoon made, late eighties - early nineties, but who knows. I don't know if it was a movie or a TV show of some sort. But most probably a TV show.

According to a comment above, this may be The New Adventures of Gigantor. Sci-Fi Channel broadcast it from 1993 to 1997. It was converted from New Tetsujin-28, which aired on Nippon Television from 1980 to 1981.

This may only be a partial match, since the boy controls the robot with an interface on his glove, not a joystick, but maybe Heroman as per Cartoon where a little kid controls a huge robot which used to be small toy using glove? 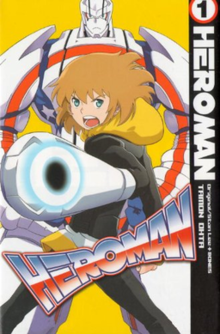 Not the answer you're looking for? Browse other questions tagged story-identification cartoon robots or ask your own question.

5
Mid-80s cartoon with 4-5 robots with "special powers" to zap things; had a scene with a kraken chase on an ice world
13
No dialogue, just music - What was this 1980's sci-fi anime/cartoon short?
10
What is this show about a lion statue in (probably) Venice?
5
Cartoon/anime that featured a huge orange see-through beast that was controlled by the protagonist
3
Cartoon/anime where thunder hits a robot and the boy hero can then control it to fight evil with
3
80s or 90s cartoon series - Female protagonist has a large cat as a pet and collects crystals or gems
6
An old half remembered scene from an unknown movie/TV show where two astronauts are fighting inside their ship
6
Old cartoon with a red? robot in a desert and a girl
4
Cartoon with a boy who goes to another world, where he fights monsters and meets a boy and a girl