1990s(?) story. Someone is killing people who have special abilities (super powers)

I am trying to ID a story (or comic book series) from the 1990s I believe. It would have been in English.

Someone is killing people who have special abilities. (Sort of like Skyler was doing in Heroes TV series)

A few hundred(?) people are born with special abilities. I am pretty sure they were all born (or conceived) on a specific day/time.

I think the date/time was the testing of the first atomic bomb. (Or maybe the Earth passed through a comet tail. Or a large meteoroid exploded over the USA.)

I believe most of these people had been known/exposed because they went public about themselves. (Either doing good deeds, or performing on shows/TV events) [I think eventually either the Government or the Specials figured the date/time cause, and identified all the unknown Specials.]

There is only 1 Special who I specifically remember, he was supposed to be invulnerable. I think he was killed while he was asleep, by evacuating the air out of the room he was sleeping in. (No Oxygen, he suffocated)

Pretty sure it turned out the one who was doing the killing, was one of the Specials. But maybe he had a pretty weak or pointless ability and was jealous of the others.

I have thoughts that maybe he tricked one of the other Specials who had high intellect, into figuring out how to kill some of the specials, before he started killing.

Rising Stars, a comic book series written by J. Michael Straczynski. The first issue was released in 1999. This was after he became well-known as the creator, producer, and main writer for the science fiction television show Babylon 5. Here's a cover scan from the volume that collects the first eight issues. It may look familiar? 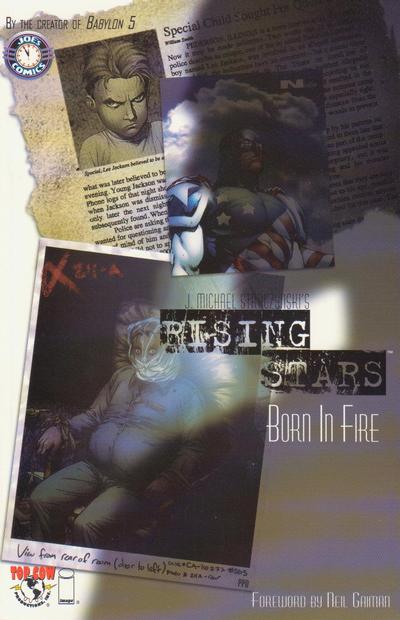 A few hundred(?) people are born with special abilities. I am pretty sure they were all born (or conceived) on a specific day/time.

The kids end up being called "Specials" with a capital S, as you suggested. There are originally 113 of them. The idea is that all of them were unborn, still in the wombs of their respective mothers in the town of Pederson, Illinois, on a certain day when something very strange happened up in the sky directly above the town. At least one of these children was conceived right around the time of that big flash of light (which no one could really explain when it happened).

As far as it could be reconstructed later, that event somehow gave superpowers to every child who was anywhere in the nine-month range from "just got conceived a second ago" to "the mother was already in labor" at the moment of that strange event. Anyone in Pederson who had already been born was entirely unaffected.

I don't remember just when the superpowers became obvious in at least one or two cases (and at least one girl didn't realize she had powers until she was in her twenties!), but I think it took several years after the event before there was any solid evidence of superpowers. However, the federal government of the United States had taken a strong interest from early on, and for a while the kids were all being kept together in a special compound much of the time, whether any given kid had yet manifested any special abilities or not. In some cases, of course, it was impossible to gauge whether a baby born just about nine months after the event in the sky had been conceived shortly before or shortly after that moment in time.

There is only 1 Special who I specifically remember, he was supposed to be invulnerable. I think he was killed while he was asleep, by evacuating the air out of the room he was sleeping in. (No Oxygen, he suffocated)

Yes, he was the first one to die (after those kids were all up in their twenties). He was the focus of a murder mystery that was central to the plot in the early part of the series. Peter Dawson had developed an invulnerability power that was supposed to be the result of an invisible field which did a crackerjack job of protecting his body from physical threats such as blows with blunt objects, cutting edges, bullets, electric shocks, etc. The problem was that this force field was something he couldn't consciously control. He couldn't really feel any physical sensations from outside influences, except for the taste of food and drink as they passed through his mouth. (His power wasn't trying to make him die of hunger and thirst, after all.)

The result was that, with very few other ways to really enjoy himself, he ate like a pig in order to feel pleasurable sensations throughout the day, and was extremely fat when he died. Someone had figured out that one sure way to kill him would be to cut off his air supply . . . and then he would suffocate. That's Peter Dawson in a crime scene photo in the bottom half of the book cover shown above. A plastic bag was tied over his head and he was also bound into the chair so he couldn't reach up and take it off before he passed out.

Note: It's been a very long time since I reread my copies of the book collections. Offhand, I'm not sure if Peter's force field would have automatically filtered out "poison gas" in the air he breathed, but I guess either it was already known that it would have filtered out all harmful gasses (as I believe it would filter out any poisons added to his food and drink), or else someone decided not to risk trying that approach and failing, and thereby tipping their hand too soon, so they went for the "let's deprive him of air entirely!" route just to be on the safe side.

Of course some of the other Specials -- ones who had powers that were more colorful and versatile than just "I am passively protected by a force field, 24/7" -- started investigating this mysterious death of a childhood friend. And as you said, it turned out that they were being killed off by at least one of their own. (I don't want to go into details about who and why, because that would ruin the mystery, although the Wikipedia page that I linked to certainly isn't shy about delivering spoilers. You've been warned!)

The main Rising Stars series was 24 individual issues which were subsequently collected into three trade paperbacks (TPBs) reprinting 8 issues each. There were also various one-shots and spinoff miniseries set in the same universe (not all written by Straczynski) which were collected in other TPBs. If you want to take a look at Rising Stars Vol. 1: Born in Fire, the volume that reprinted #'s 1-8 (which I suspect is what you were remembering when you typed out your description), then you can find it on Amazon right here.

When I found that link just now, I discovered that, if you currently are active in the Kindle Unlimited program on Amazon, you can borrow that one for free. (Or you can pay to download a permanent copy, or you could order a printed edition through the mail.)

9
Story Identification: 5 people with special abilities, one who is immortal, and a plan to revive all the Jews killed during the holocaust
3
Fantasy book about people in a journey who have special organs
8
Book series about these teenagers with special powers and every book changed main characters
6
Young Adult Fantasy book where some people, like the female protagonist with super strength, are called a special name with their special powers
13
Story about a boy who could wish to be someone else and would gain their skills
6
Sci-fi book with a deaf/mute main character and implant headphones