In this drawing of the Avengers, who's the guy on the right?

In Spider-Man: Homecoming, the very first scene shows a kid's drawing of the Avengers' battle with aliens in New York City:

Who's the guy on the right hand side with the sword? 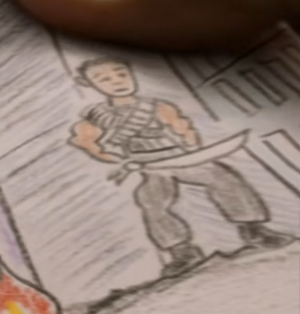 At first I thought it was Clint Barton/Hawkeye, but after a closer look the important details don't match. Here's a photo of Clint from that battle: 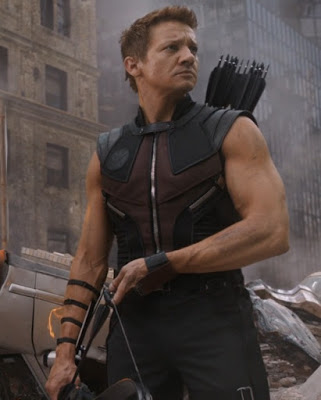 There is a superficial resemblance, but in the drawing:

The "scimitar" does have a bow-like shape, but why would you hold a bow at the end instead of by the central grip?

Now granted, this is supposed to be a kid's drawing and you wouldn't expect perfect accuracy. But all the other Avengers are correct in their main elements and the artist (in-universe) clearly took their time to put in a lot of details. So while it could be Clint just depicted incorrectly, I'm more likely to think it's someone else.

But who is it?

It IS Hawkeye, depicting his Ronin character from Avengers: Endgame. 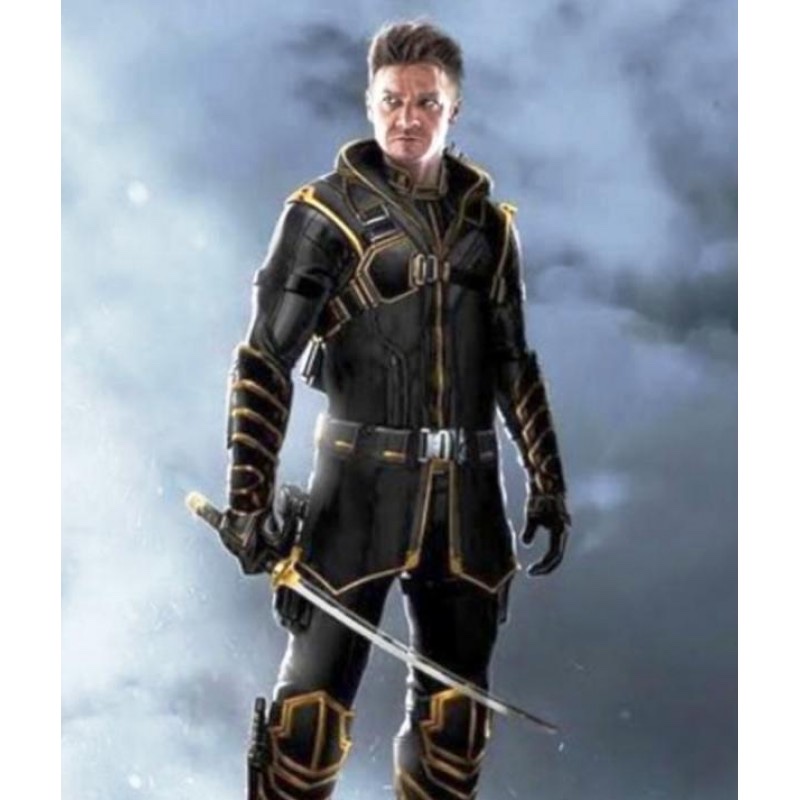 According to Screenrant, it is an Easter Egg revealing Hawkeye’s future transformation into Ronin:

Clint Barton skipped Avengers: Infinity War only to return as Ronin in Endgame, but his transformation was teased as early as Spider-Man: Homecoming.

The transformation of Hawkeye into Ronin was seen in Avengers: Endgame, but it was actually first teased during Spider-Man: Homecoming. The Avengers' resident marksman skipped the events of Avengers: Infinity War altogether as he served home detention following his actions in Captain America: Civil War. By the time he came back to the MCU forefront, he had already ditched his old persona as Hawkeye and assumed a new one as the masterless samurai.

In the months leading up to Avengers: Endgame, there were persistent rumors about this dark turn for Clint Barton even prior to the release of any footage for the film, thanks to the arrival of tie-in merchandise depicting him as such. The trailers for Endgame further teased his turn into Ronin, but it turns out that fans were already tipped off to his imminent introduction as early as 2017 in Spider-Man: Homecoming.

During the prologue scene of Spider-Man: Homecoming, we see Adrian Toomes (Michael Keaton) look at a drawing of the Avengers during the battle of New York made by his daughter, Liz. He and his people were gearing up to take care of the rubble left by Earth's Mightiest Heroes' fight against Loki (Tom Hiddleston) and his Chitauri army in New York when he held up the illustration recounting the six original Avengers in the middle of the battle. However, while every single hero looked pretty much like themselves, Barton's Hawkeye is interestingly carrying a different weapon than his signature bow and arrow. Instead, he's carrying a sword - something he wouldn't do until Avengers: Endgame, effectively spoiling what would be his character's future trajectory as Ronin.

During the production of Spider-Man: Homecoming, Marvel Studios creatives were deep into mapping out how Avengers: Infinity War and Endgame would pan out. And it's safe to assume that it included the decision to have Barton sit out the initial fight against Thanos, before his family is then killed by the Snap, which was what justified his dark turn as Ronin in Avengers: Endgame. It's entirely possible, then, that this was a knowing Easter egg for the film, especially since the MCU loves its moments of foreshadowing.

Of course, the proper Hawkeye did return in Avengers: Endgame as well, but his transformation into Ronin was one of the most discussed parts of the movie prior to its release. Spider-Man: Homecoming might've just intended it as a fun Easter egg and a nod towards something that might happen - although its opening scene already has one major mistake - but looking back we can see it as a fun tease of what Hawkeye would become.

Not the answer you're looking for? Browse other questions tagged marvel marvel-cinematic-universe the-avengers-2012 spider-man-homecoming or ask your own question.

51
Was Thor unworthy during “The Avengers”?
12
Where was Loki at the beginning of the Avengers?
13
Who was the third guy that was affected by Loki's sceptre at the start of the Avengers movie?
25
Did Agent Coulson die in The Avengers?
5
As Goliath, did Clint Barton ever take advantage of his Hawkeye skills?
14
Who bought the Avengers Tower?
3
Did Loki and Thor arrive at Asgard right after the Avengers?
11
What character is this drawing of in Pop's Barbershop?
1
Why is Hawkeye using a sword instead of bow and arrows?