I don't remember much about it but there were elves in the story I think. Just basically he gets sent to another world with a shotgun.

I can confirm that it is not any of the following:

Could it be An Active Hunter in Hokkaido Has Been Thrown Into a Different World...?

It definitely has elves in it (named as such in the story), and after being attacked by a bear, the male protagonist suddenly finds himself in a forest in another world, armed with nothing but his shotgun. 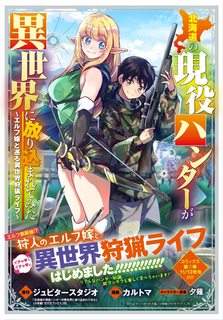 In modern Hokkaido a brown bear has appeared near an elementary school, so a member of the local hunters' association is dispatched to exterminate it. However he gets killed by the bear and wakes up in a fantasy world, armed with only the Remington M870 shotgun he had when he died.