Science fiction novel where children grow up on a spaceship

I’m having trouble identifying a book I read sometime in the last 5-10 years.

The details I remember are that humans were raised by the spaceship's AI, and that the children/young adults are not aware that they don’t have access to all areas on the ship.

At some point, one of the humans accidentally accesses a new part of the ship (I can’t remember the details of how, but I think they pass through a force field that was disguised as either a wall or the floor that they go through, and they are scanned while passing through to determine that they do have access to this new part of the ship).

I know that’s pretty vague and not a lot to go on, but if that sounds familiar it would be great if anyone has any ideas for which novel this was!

Lacking additional information, I'm going to posit The Star Seekers by Milton Lesser. As per this review:

When man tackles the first really long journey - across twenty-six trillion miles of uncharted space - to the nearest star, it will take him two hundred years to complete the flight. Not until the sixth generation nears maturity will the starship reach its destination. Around this fascinating theme, Milton Lesser has woven a tale of the first starship's final days of flight. He pictures the ship as a hollowed-out asteroid composed of four concentric circles - a world in which civilization has deteriorated and superstition risen to a high pitch, making those within unaware of the fact that they are traveling through space or that their journey is destined to end.

All Mikal knew when he embarked on the "Journey of the Four Circles" was that every eighteen-year-old from Astrosphere, the outermost circle, must visit each of the other circles if he hoped to become an Enginer. But before he completed his trip, he unearthed startling truths that threw the four circles into a state of chaos. Gradually Mikal discovered that unless the people of the four circles took immediate action the ship was doomed to crash. Mikal's desperate efforts to unite the four circles in order to save their world is a story of rising tension and clashing interests.

Found on the TV Tropes (warning, it will ruin your life) page for Generation Ships.

This could possibly be End of Exile (1975) by Ben Bova, the last novel of his Exiles trilogy.

The novel follows Linc, one of a group of teenagers born on and living in a spacecraft that is meant to carry them from Earth to a habitable planet, although the teens are not really aware of their circumstances. They live and farm in the outer sections of the deteriorating vehicle, forbidden to explore or try to tinker with the machines around them—even as those machines are failing. All they have to guide them are a handful of prerecorded video messages left by Jerlet, the last adult left alive on board. When Linc tries to fix a broken machine, he is cast out by Magda, the group's leader, who has become a priestess reiterating Jerlet's words.

Exiled among exiles, Linc discovers that he can find his way inward into empty sectors of the ship. He ultimately finds Jerlet, who is still alive, but who had to move to the center of the rotating ship—where the artificial gravity is negligible—because of the weakness of his failing heart. Eventually, with Jerlet's help, he is able to prepare the teens for the ship's upcoming arrival at their destination, the habitable planet of Beryl. 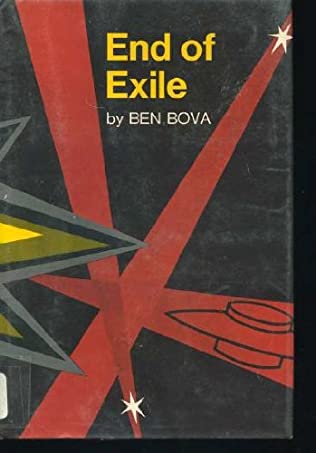 All three books in the Exiles series were aimed at young audiences, but the first two, Exiled From Earth and Flight of Exiles centered around adult characters and thus had a rather different feel from End of Exile, in which is dominated by teens. The first two books are also fairly hard science fiction, while the last book introduces teleportation technology seemingly out of nowhere. Of course, Bova was not, in general very concerned with maintaining any particular kind of unity in his multi-book series, and, in fact, all three books could be read essentially independently. (For example, they have no characters in common; the very first thing that happens in Flight of Exiles is the sudden death of the main character from Exiled From Earth.)

Another possibility is ‘’Earthsearch’’ by James Follett: