Book about genderbending shapeshifters who feed off death energy?

I read this novel back in the early 90's. I seem to remember it had a very colorful cover with an image of faces rendered with fairly crude computer graphics. It was an oversized paperback collecting two novels, which was fairly unusual at the time.

The plot involves a secret society of shapeshifters that call themselves "darklings". I forget the specifics, but apparently when normal humans die it sends out a wave of energy that forces them to shapeshift, so they live in the wilderness far away from people. They change into a different human form, retaining the same mass (so if they become shorter, they'll also be heavier) and don't have control over what their new form will look like. A human woman is abducted, raped and beaten almost to death or badly burned (I forget which) by a serial killer, and then abandoned in the wilderness where the darklings find her. They magically heal her, but regenerate her body using the image of the last person she was thinking strongly of, which unfortunately was that of her attacker. Understandably the poor woman is horrified not only to find herself in a male body, but that of the man who almost killed her. She's arrested by police and tries to prove she's not the killer. There's also a plot with the darklings trying not the be discovered, and the killer still going around killing - I don't remember much of the plot from here on in, just the set up.

In the second book collected in it, some sort of psychic contamination is warping the darkling children when they first start learning to shapeshift, I recall vividly that they end up as round lumps of bone and flesh and the adults have to keep using their healing powers to form openings for them to breathe through. I think the villain was a rogue darkling. 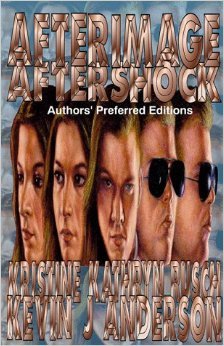 As you say, the two novels were published together in a single book:

Afterimage Aftershock: the trade omnibus reprinting of Afterimage and the never before published sequel Aftershock.

Afterimage: He was known as the Joan of Arc killer-a sadistic rapist who burned his victims before he murdered them. Rebecca Tamerlane had been staring into this monster's face as he hovered over her broken body, the smell of gasoline in the air. Suddenly her body felt completely whole and surprisingly strong... only it wasn't her body.

Aftershock: The darklings, or shapeshifters, have always lived in peace with the land. As a series of earthquakes rock California, the land is injured. Unable to use their magic to help themselves, the darklings begin to change, and die, with each new quake... Unless they can find out what is wrong with their magic they will undergo changes. Changes like what happened to Rebecca Tamerlane, except they will never end... until death.

3
Book set in contemporary times about a travel writer who is inducted into the world of the supernatural
3
Story about a woman who crashes her ship and finds out she became emperor but she stays to have a wake
6
Novel, group transported to a fantasy world, wild/chaos magic
7
Kindle book about a woman who helps remove ghosts from houses
18
Old SF novel about a white-haired young woman, alien or half-alien, who tutors human kids
10
Story about school children who turn into animals in a garden
3
Webcomic with a female undead gunslinger in a steampunk setting - not Back
11
Short story about a young psychic man who disrupts a home full of unusual people?
5
YA horror mystery book with mentions of witchcraft and Joan of Arc