I've been trying to find this book (obviously unsuccessfully) for at least six or seven years. I read the book only once and sometime about 9-10 years ago; hence my memory of it might be a bit off on certain things.

Aliens, who are mostly (if not altogether) unknown and unspecified, threaten the Earth with partial extinction unless a certain set of keys (not literal keys, of course) are collected and brought to some sort of alien pyramid. The pyramidal structure was on Earth, but wasn't made by humans. Each nation, I believe, sent a team of one or two people to compete in this odd treasure hunt for the keys. I'm not completely sure, but I think the reward for the winning team was that their nation was saved from the apocalypse? Something like that maybe, but now I'm not so sure that was the reward. But they were definitely competing for something very important, and something bad would happen to the losers.

The competitors could, and sometimes did, kill one another. Also the keys were spread out across the world. I think one of them was hidden at (or involved) Stonehenge, maybe? I also seem to remember that there were clues involved (again, kind of like a scavenger hunt). As far as I can recall, the aliens were never named in the book and never engaged in any kind of war with Earth. I remember the novel was more marketed towards people in their late teens, or else young adults. It was definitely published after the 80s, and was probably published sometime between 2002 and 2014.

Could this be the Endgame trilogy (2014-2016) by James Frey and Nils Johnson-Shelton? It is marketed as young-adult fiction, and was set up as a clue-following treasure hunt.

Twelve thousand years ago aliens set up the earliest human civilizations to mine and provide them with gold; they also created 12 bloodlines to preserve their secret and be prepared for when they return.

Each bloodline has its champion, who are revealed when 12 impactors wipe out 12 cities initiating the titular "endgame" wherein the 12 champions compete to collect a set of 3 keys; the Earth Key, the Sky Key and the Sun Key. The prize is salvation for that champion's bloodline; everyone else gets wiped out.

The Earth Key was hidden beneath Stonehenge. And Sarah, who caught the key, killed two other champions to get it.

The Goodreads entry for the first book has more explanation of the backstory. 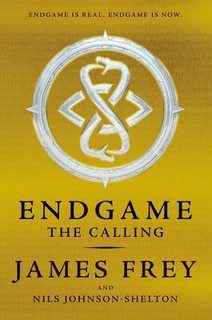 I believe the book/series you're referring to is Matthew Reilly's Jack West Jr. novels.

The first novel in the series is the one Moo mentioned in the comments - Seven Ancient Wonders (released as Seven Deadly Wonders in the USA), originally published in 2005.

The plot revolves around a race to assemble the capstone of the pyramid of Giza. 4500 years in the past, the capstone absorbed the power of the 'Tartarus Rotation', a massive sunspot that threatened devastation on Earth. 1,000 years later, Alexander the Great divided the capstone into 7 pieces and hid one in each Ancient Wonder of the World. When the capstone is re-assembled and placed back on top of the pyramid during another Tartarus event, the person placing it can bring either 1,000 years of peace or power to their nation. If the capstone is not assembled in time, the sunspot will ravage the Earth.

Jack West Jr. leads a team of 'minnows' from a variety of smaller countries (Australia, Canada, Israel, Spain, UAE, Jamaica and Ireland) who are attempting to reassemble the capstone with the intention of using it for peace. They compete in a scavenger hunt with the USA and a league of European nations, who intend to assemble the capstone and use it for its power.

The subsequent novel, Six Sacred Stones features another treasure hunt, this time for a group of 'pillars' which must be placed into the 'Machine'. The 'Machine' is a device built by an ancient civilization which protects against the return of a 'Dark Sun'. One of the pillars is located in Stonehenge.

Not the answer you're looking for? Browse other questions tagged story-identification aliens young-adult pyramids or ask your own question.