This was a pair of short stories (published in Analog, maybe late '80s?) set in a near future where man has spread out over the solar system. As for characters, there was a shuttle pilot (female?), and the prototypical absent-minded scientist (male, Scots name).

It opens with a discussion of why a high-gee spacecraft drive is not practical because of the effects on the crew/passengers. Said absent-minded scientist promptly goes out and invents one by positing that you could push a large disk of collapsed matter at high-gee, and move a crew capsule closer to it and farther away from it to balance the thrust, leaving the crew at 1 gee. Various implausible things happen when this system malfunctions while the capsule is snugged up against the disk, meaning you can't turn the drive off.

I actually had the magazine for the longest time, but can't find it now. The first story was the cover story on issue it appeared in, and said spacecraft was pictured on the cover, looking like a disk with a spike sticking out of it.

I think the story you're recalling is Charles Sheffield's "Moment of Inertia," first published in the October 1980 issue of Analog.

The plot of the story arises when the elevator mechanism that moves the crew capsule along the shaft breaks, stranding the crew at the +49g level. To balance that they dive into the gravity field of a collapsar so that they can turn off the drive (and stop accelerating) without crushing them.

Another ship manages to match orbits with them and rescue them.

The cover of the October 1980 issue of Analog does indeed depict the ship: 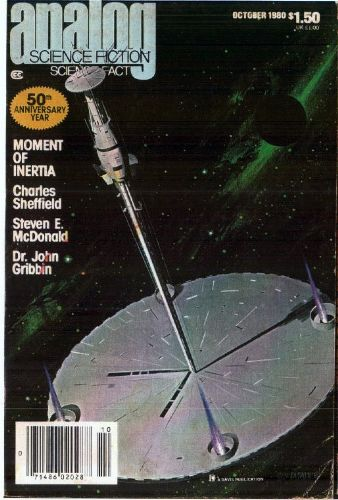 20
Near-future novella by non-pro, feat. life extension, solar system colonization
5
Trying to find out about a book of short stories - each story was about one of the planets in the solar system
9
A collection of short stories about various currently existing cities set in a dystopian future
11
Short story set in the near future where all wars are settled on the moon using automated machines?
4
Short Story Set In Future Where Jingles Become Pop Music?
12
Near future dystopian USA where rampant disinformation has destroyed "truth"