This is going to be a very vague question, but it's bugging me that I can't remember this comic that I liked when I was younger. I only ever read one like volume of it, not a single comic book. I imagine it wasn't very popular because I don't think I've ever heard of it since.

I would have read it in the early 2000's, but I believe it was from the late 90's and I think it took place in the future. It was about a young woman who found out she was some sort of monster hunter. I think she was asian, but I wouldn't swear to it. She maaaaayyyy have had purple hair, but I could be imagining that. I believe she had some guy who was like a guide to her.

I know this is very vague and I'm sorry! If I think of any other details, I'll update. If you know any comics that sound like this, please let me know! lol

Update: I want to say the guide in the series was a man, not a creature or anything like that. I believe the girl used laser guns and possibly a sword to fight.

You may be thinking of Joss Whedon's Fray, a sequel to Buffy: the Vampire Slayer 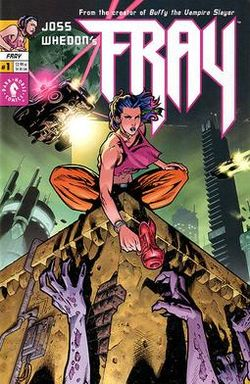 Centuries have passed since the last Slayer was called. Demons were banished from the Earth at some point in the 21st century by an unnamed Slayer and her friends, and the Watchers' Council has decayed into a group of crazed fanatics. The vampires (dubbed lurks) have now returned and haunt the city. To combat this threat, a new Slayer is called: a professional thief named Melaka Fray. With the Watchers' Council ineffective, a group of "neutral" demons send the demon Urkonn to prepare Melaka for the war that is sure to come.

Although training hard and feeling confident, Mel finds herself out of her depth when she fights the vampire Icarus. Years before, Icarus severely injured Mel and killed her twin brother, Harth. Mel discovers that Harth was not actually killed: after being bitten by Icarus, he bit back and fed off the vampire, becoming a vampire himself. Since he was the Slayer's twin, he has the visions and instinctive knowledge that should have been hers: he knew what Mel is long before she did, and also knew how to become a vampire.

Disheartened, Mel refuses to fight, until she discovers the body of her young friend, a girl named Loo, with her neck snapped. Determined to avenge her, Mel rallies the inhabitants of the slums to fight against the vampires. Police officer Erin Fray (Mel's older sister) convinces some of the local law enforcement to also join in the crusade.

Mel does have purple-tipped hair, and she was guided by Urkonn. 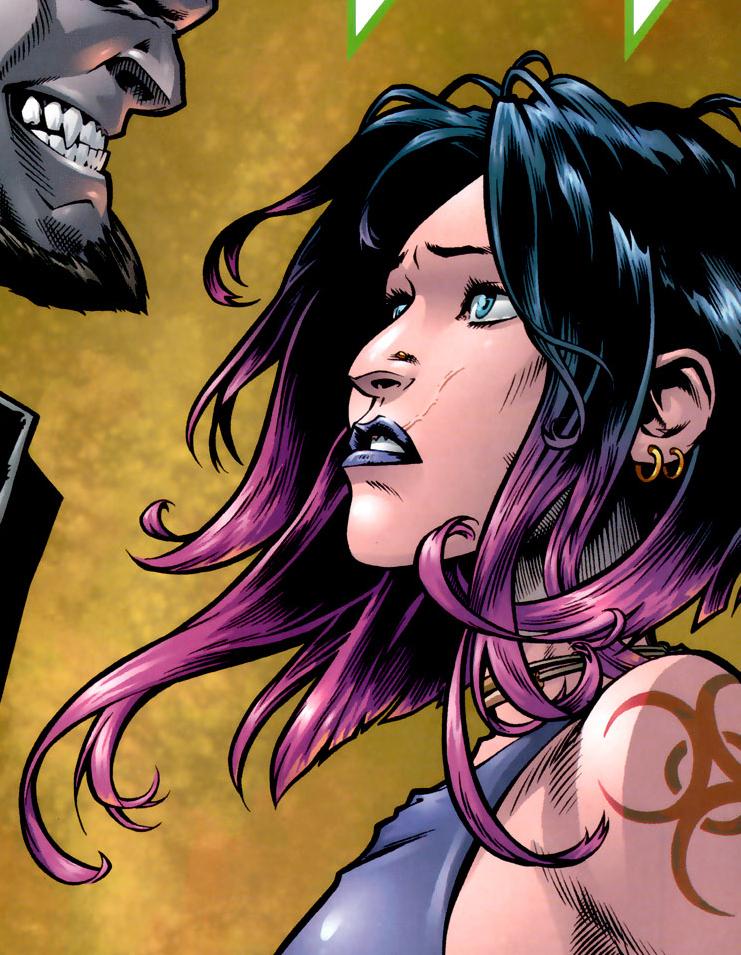 4
Comic book about a girl who can see monsters hidden among us
7
Marvel comic with robot aliens and major superhero deaths
5
Comic - woman in dystopian world
26
Identify a (French?) comic series about a female adventurer
7
Comic book set in futuristic setting with reptilian humanoids
8
Comic with superteam; electric woman, guy who can make things with his mind and a glowing 'wolverine guy' who can fly
5
German Comic - Pope Fighting Evil - Papst bekämpft das Böse