I'm a bit concerned that I am forgetting some details, but here is what I know:

I THINK it was part of a collection called something like "World's best Sci Fi", probably 1974, 1975, 1976, or 1977. I remember that there was at least one character, possibly two, who were on a planet and trying to understand why people were entering a cave (or swimming in a pool or something like that) and never returning. Eventually, the main characters enter the cave/thing and realize that they will just experience euphoric happiness while there. The story ends with them staying in the thing.

A Song for Lya by George R.R. Martin, published within The 1975 Annual World's Best SF. 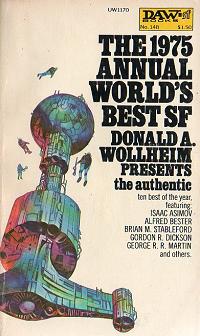 The two main characters are a pair of telepaths who visit a planet where the resident population worship parasites called the Greeshka, and visit caves in order to be voluntarily consumed by them.

“And Union, well, it’s wrong to compare it to human sacrifice, just wrong. The Old Earth religions sacrificed one or two unwilling victims to appease their gods. Killed a handful to get mercy for the millions. And the handful generally protested. The Shkeen don’t work it that way. The Greeshka takes everyone. And they go willingly. Like lemmings they march off to the caves to be eaten alive by those parasites. Every Shkeen is Joined at forty, and goes to Final Union before he’s fifty.”

One of the main characters, Robb, posits that the Greeshka produce some sort of pleasure drug which induces people to give themselves over to them willingly.

“We’ve known that, but the point’s always puzzled me,” Valcarenghi said, climbing to his feet. He went to the bar for more wine, brought out a bottle, and filled our glasses. “A truly mindless parasite, but an intelligent race like the Shkeen are enslaved by it. Why?”

The new wine was good and chilled, a cold trail down my throat. I drank it, and nodded, remembering the flood of euphoria that had swept over us earlier that day. “Drugs,” I said, speculatively. “The Greeshka must produce an organic pleasure drug. The Shkeen submit to it willingly and die happy. The joy is real, believe me. We felt it.”

In the end, the other main character, Lya, gave herself up to the Greeshka, and Robb almost did as well, but he was knocked out and dragged to safety by others first, after which he returned to his homeworld.

The full story can be read here.