I watched this probably about 3 years ago on Netflix. I don't know if it was a Netflix original, distributed by them, or just one they'd licensed. I think it was a roughly contemporary film, within the last ten years, not big budget. The effects seemed to largely be CG, and well enough done to not be distracting.

The action is set on a farm (I think, still active). The primary villain, when seen, appears wearing a long coat and a gas mask that I remember looking distinctive, although I don't recall why. At one point in the film, it's established that he wears it when spreading insecticide on the farm, but it's suggested that he brought it back from World War II. He might have been suspected in a death on the property, but he is believed dead during the main plot of the film, which follows at least one young woman.

I don't recall exactly why she was at the farm. Part of me has her housesitting for an older couple who owns the farm, but another part of me has her babysitting a kid, as I'll mention later. At some point in the film, there were at least two young women present. I think they may have been college friends.

The apparent source of the antagonist's power is a Nazi artifact, maybe an Iron Cross or swastika, which he was sent for safekeeping, and which he hid inside a wall in the basement. I remember there being a letter that came with it telling him to safeguard it, and I think more explicitly indicating this was from Nazi command, and I think it arrived in a leather pouch with a flap. There was at least one scene that showed it slowly burning away the wall in the shape of the artifact.

I have muddled recollection of the plot. I remember a scene where a young woman has her face thrust into a horse water trough in a barn by an unseen force, either nearly or actually drowning her, possibly with her other friend outside the barn, unaware of the struggle. I remember someone driving up in a pickup truck, and the protagonist ushering a child out of the house to get into said truck, only to be pulled back into the house and presumably killed.

I'm going to come back through my history to see if I can find a match, but my attempts at Googling it have failed.

Presumably this it The Hatred (2017). The opening part of the synopsis on IMDb matches and the rest seems to as well, but as it's rather long I've only included the opening.

Samuel returns from his work out in the fields and sits down to a meal with his wife Miriam and teenage daughter Alice. Alice asks for permission to go into town and Samuel rejects this, insisting that town is no place for a young girl. After his daughter storms off Samuel answers a knock at the door to find a mysterious case sitting on the front step - the deliverer having driven off before his arrival.

Samuel immediately takes the case into the basement and opens it - uncovering a picture of his younger self next to Adolf Hitler and a letter telling him that the artifact inside - a large piece of metal in the shape of an Iron Cross - has been entrusted to him for safekeeping. Taking the artifact, Samuel knocks a hole in the wall and seals it inside before returning upstairs.

Here's an image of the gas masked character you are remembering: 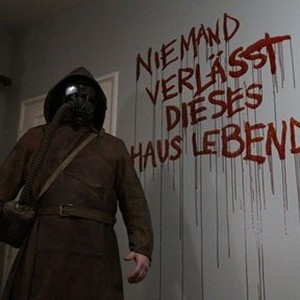