Anime about a club of high school girls that fight monsters

I remember this watching this anime, with like Madoka Magica vibes, about a high school club of girl members that (they dont know why it just happens) have to fight against monsters. I dont remember the name but I remember these details:

Pls pls pleaseee help me find it, I have been looking for it like crazy. 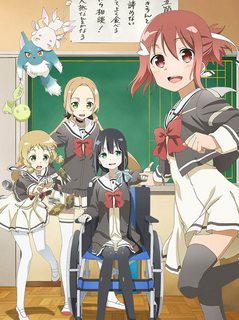 The story takes place on the Japanese island Shikoku in the fictional city of Sanshu, based on the real-life city of Kan'onji in Kagawa Prefecture, in the 300th year of the Era of the Gods. Yūna, Mimori, Fū, and Itsuki are all members of the Sanshu Middle School Hero Club, dedicating themselves to helping those in need. One day in their regular daily lives, the Hero Club members are suddenly caught in an explosion of light and transported to a strange forest, where they encounter mysterious monsters known as Vertex which seek to destroy the Shinju ("Divine Tree"), the guardian deity which protects and blesses humanity. Using a special phone application granted by Taisha, an organization dedicated to the Shinju, Yuna and her friends must transform into "heroes" with magical powers to protect their world from imminent destruction.

The girls -- all members of the Sanshuu Middle School Hero Club (Hero Club for short) -- transform into costumes when going into battle, as you described:

The wheelchair-bound girl you mentioned, Mimori Togo, holds herself upright with ribbons extending from her battle costume. 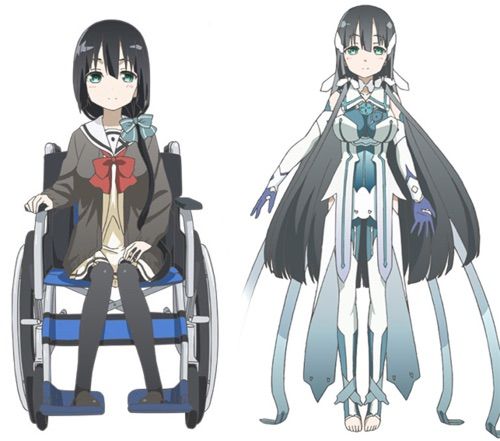 The titular character, Yuna Yuki, temporarily lost her sense of taste, her mobility and consciousness:

As a result of using her Mankai form, she loses her sense of taste. Later, she uses the Mankai form for a second time and loses the use of her legs. Having fallen into a coma due to her efforts, she regains consciousness after Mimori's voice reaches her, as actually her soul was out of her body in a black hole-like realm. She soon recovers and regains her sense of taste and the ability to walk.

7
Searching For Horror Anthology Book Title
12
Anime about half-human girls who fight monsters?
5
What is the name of the anime kids, mecha and fantasy series with a group of 4?
9
Anime movie about space aliens and robots
9
Anime about boy & summoning monsters
3
2010s(?) cartoon: three teens have the power to control monsters to fight other monsters
6
Looking for an older maybe 20 year old Mech Anime
3
Anime where genetically modified girls fight aliens/sea monsters
5
Anime about high school student that protect their school from monster or maybe ghost
13
Space op anime featuring a group of girls debugging a combat robot in-fight?