Black & white TV episode about a man who discovers he is a robot (not: "In His Image" or "The Electric Ant")

Black & white '60s TV episode; A young man, dark hair, wearing khakis & a plaid shirt(?) is in town when he hurts himself, cutting his arm/wrist open, only he doesn't bleed. Instead he sees wires inside his arm, and ends up finding his way to the basement laboratory where he was made, eventually discovering he is not human, but a robot.

I thought the actor was George Maharis (not). I thought it was a Twilight Zone episode or The Outer Limits (not). It was definitely a short (30 minute) episode of some syndicated show very much like TZ. Any help would be appreciated.

Well, if I had the ability to bend over and let all of you kick me in the backside, I would, but the answer is in fact; 'In his Image.' I take no pleasure in admitting I made a mistake. I don't know how I did it except to say that I remembered so little of the episode that in previewing 'In His Image' and watching the first fifteen minutes, it stirred absolutely no recollection whatsoever AND the sample images at IMDB actually show the wires in the arm wound on #17 of 18 images. I hope I didn't send you all on too much of a great big goose-chase! I promise never to darken this website ever again. 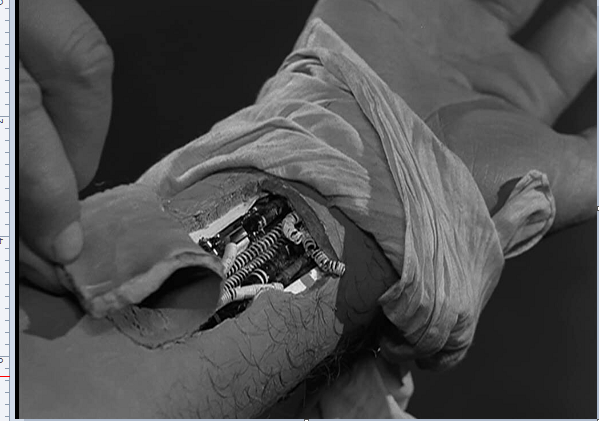 This could be 'The Brain of John Emerson', a 1955 episode of 'Science Fiction Theatre'. The synopsis on IMDB is very short, but it is about a man, after a brain operation, who begins to remember things he didn't experience. These memories lead him to the home of the deceased surgeon who operated on him; finding the surgeon's lab, he discovers he can operate the equipment. It does not give away the ending.

12
What 80's/90's TV episode has a man escape technology in the countryside, and another hunt him down?
7
TV sci-fi episode - creature stalking a man using a boomerang as a weapon
3
What TV episode has a child go missing and return un-aged when their parents are very old?
18
Businessman berates beggar and is then turned into a beggar
12
Episode of TV show where nobody was allowed to be smart
4
TV movie or episode, a man locks his wife outside during a pandemic
6
TV show episode or movie where world's existence depends on a man's life
25
Outsmarting the Devil
7
Woman lost in time: Black and white TV show/movie
13
Show where an episode ends with a man levitating, imprisoned in a top secret facility?