Isekai manga where the main character is protected by a giant gorilla, which later turns into a beast girl

The manga involved the main character waking up in another world or something, really weak, and every creature around him was extremely over leveled. Later in the manga, he had a giant gorilla protect him, and he eventually got stronger than the gorilla. The gorilla then turned into a beast girl. I remember it being really funny to me, but I can't seem to remember what it was. 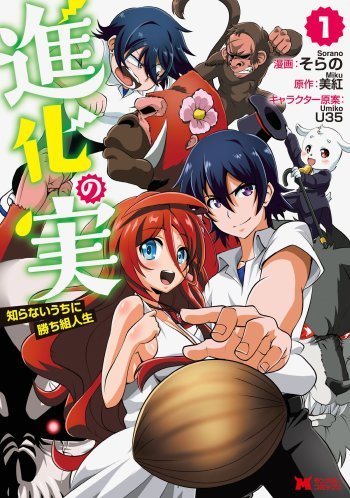 A young male is transported to another world, and finds that he has very low stats, like a JRPG character at the start of a new game. One of the first enemies he fights is a monkey creature with very high stats, and he's confused as to why he's encountering such a powerful enemy so early. He later encounters a large and powerful, but somewhat feminine talking gorilla, who transforms into a girl when he kisses her.

Hiiragi Seiichi is an ugly, revolting, dirty, smelly fatass; these are the insults hurled at him one after another about his appearance. Such was Seiichi's daily school life of bullying, then for some reason, one day when school was out, a voice claiming to be a God said over the PA system to prepare to be transported to another world. What's more, not Seiichi alone, but the entire school. A fantasy world where game-like elements such as as levels, stats, and skills exist. However, the God still had preparations to complete for the transfer, and would send them over as soon as the hero summoning ritual was ready. The classes all formed groups to wait for the transfer, but Seiichi alone was discluded and as such was summoned to a different area. After being transported the first thing Seiichi ate was the "Fruit of Evolution."