I saw this on Youtube at some point in 2020, after having watched The Old Guard with a clip being presented as an example that it was not an original idea. It possessed a similar concept to The Old Guard with there being a small number of immortals, and that they were being chased by people (corporations? governments? the rich?) to be studied for the secret to immortality. The clip shown involved an approximately middle-aged Caucasian man wearing round glassess, and with either a hat or short hair, who's being shot with tranquilizer darts, with him neutralizing one of the darts that hit him on his forearm by chopping his arm off (with an axe?) while bracing it against a wall, only to be hit with more darts. For some reason, my mental image of him makes me think "carpenter", although I'm not certain why.

The animation had the somewhat muted colors that I was used to seeing in anime in the 90s (although, I think that was, in many cases, the result of tapes copied multiple times and becoming more faded with the copies). The people were not cartoony, but neither were they photorealistic, with shading being fairly simple.

Pretty sure this is Ajin: Demi-Human, which originally aired in 2016.

The synopsis roughly corresponds to the general premise you described:

Mysterious immortal humans known as "Ajin" first appeared 17 years ago in Africa. Upon their discovery, they were labeled as a threat to mankind, as they might use their powers for evil and were incapable of being destroyed. Since then, whenever an Ajin is found within society, they are to be arrested and taken into custody immediately.

And I believe the middle-aged man you mentioned is the character third from the left in the image below (his name is Sato): 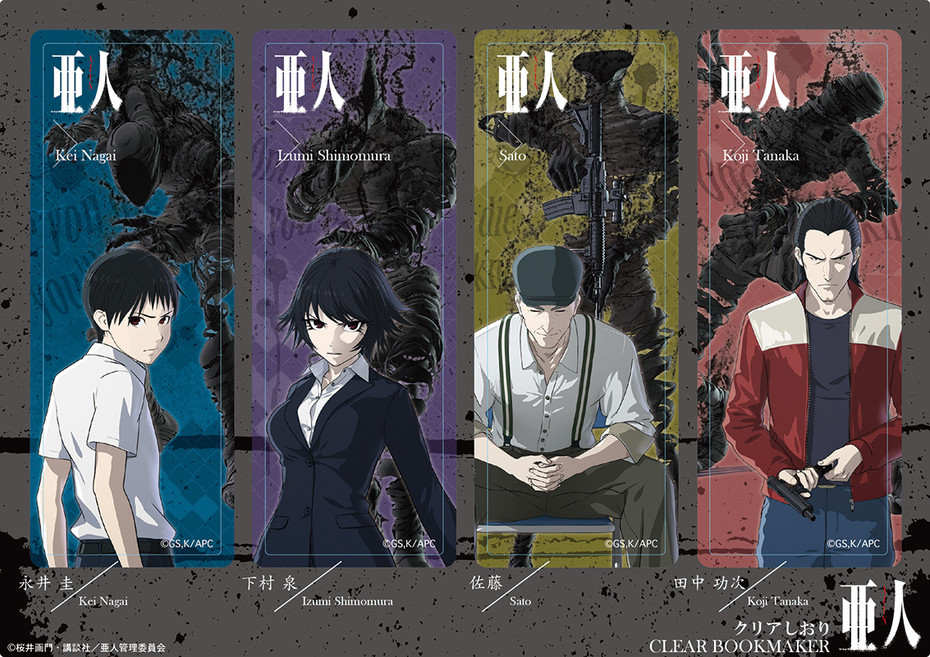 Here's a video clip of the scene where he's shot with tranquiliser darts, and hacks his own arm off with a machete (that specific bit is about halfway through the clip):

A live-action version was released in 2017:

Not the answer you're looking for? Browse other questions tagged story-identification anime immortality or ask your own question.

14
Short story: post nuclear holocaust, the human race has mutated into an ape-like being and old style humans are viewed as an abomination
5
Looking for the source of a scary story involving two brothers fighting off a type of ghoul trying to get to their sister
8
Urban Fantasy about female half-elves being hunted for their dormant powers
6
Novel (or perhaps novella) involving Minoan "jumping the bull" as metaphor for black hole like effect
18
Short story about a man getting the wrong phone number (with old-style exchange) and being 'disappeared'
10
Short story where aliens ask for Earth's help and ends with an alien being glad the Earthlings brought their moon with them
5
Cartoon/anime show involving a guy duped by the immortal bad guy, a green stone that gives pain powers, and a blue stone for super strength