I remember the story has a girl in high school who's terminally ill. She realizes she is a side character in a story. There's a mysterious guy who is like a 'cafeteria person', but only when they serve squid?

She ends up falling in love with a no name person and they try and enjoy the time they have in the story as it progresses. She ends up dying from her illness. But they get reused as characters in a different story and meet up again.

This is How I Found It in July. 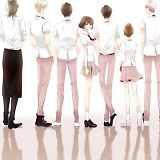 What would you do if you found out that you were in fact a character in a comic? And an extra character on top of that? Change the course of the story, obviously!

The main character, Eun Danoh, discovers that she's a minor side character in a comic, fated to die. She's terminally ill with a heart condition, and abruptly starts experience memory issues - both suddenly appearing in places with lost time and no recollection of how she got there, and also knowledge of future events. She is told by a male cafeteria worker (who only appears when dried squid is on the menu) that they aren't human, and are just characters that appear in a comic - her memory loss is just the comic skipping ahead in time.

I haven't read the whole thing so I can't confirm the ending, but the early chapters are a perfect fit.

7
Searching For Horror Anthology Book Title
15
Identify Title & Author, old short story about a man who becomes "unnoticeable"
9
Manga where two college students meet God, and are inseparable for some time, which causes them to fall in love
9
Short horror story about an explorer poisoned by a witchdoctor, the effects cause him to slowly shrink while still alive
6
What's the anime where a girl who comes to town to fight an enemy meets a guy who lives with an old man? (It's not Bleach)
2
Anime where a guy tutors a girl in magic