'80s movie with a humanoid alien in a glass casket

I've been trying to find this movie for a long time now. I watched it as a kid, so my memories are quite vague.

The most impressive thing I remember was some kind of a humanoid alien in a glass casket, with a stone on its forehead which was blinking to indicate it's alive or waking up. There was some kind of expedition that found it in a cave. I think they entered the cave from above and there were hundreds of snakes covering the floor. Unfortunately I don't recall anything about the plot itself.

I believe the movie should be from '80s, or somewhere around that period.

P.S. I talked to my brother who watched it with me. He was even younger at that time, but managed to recall that the expedition found some kind of substance in the cave that made them evil when they touched it and the same stone appeared on their forehead as well. The final scene of the movie was in an airplane - the pilot turns around and people see he also has been "infected" and has that gem on his face.

Thanks to the guys who gave suggestions and tried to help me find the movie! I'm really grateful for the hints! My brother was searching for that movie for years as well and I never knew that. Luckily when we combined our memories we managed to find it almost by accident. He came across this article and solved the mystery.

The movie is called Curse of Snakes Valley (1988)

And here is the alien in the casket which scared the shit out of me when I watched it as a kid. 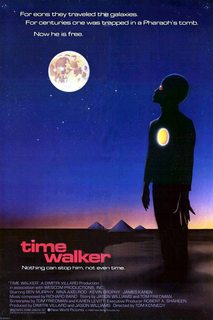 A casket containing a mummified alien is discovered within King Tut's tomb. The casket is taken to the California Institute of the Sciences, where the alien subsequently wakes up with a glowing orb in its chest. That particular scene occurs about 15 minutes into the video below.

It's not a perfect match for your description, admittedly. There don't appear to be any snakes in the film, the casket isn't made of glass or transparent, and the glowing orb is in the chest rather than the head. But you said you were a kid when you saw it, so you could've misremembered a few things.

12
SciFi/Horror movie featuring alien city landing in a US desert, forshadowed by cave paintings
16
Movie featuring space crew, murders, a forbidden door and ending with a revelation
9
Movie Identification: Humanoid Monster/Alien in a bed, 80s/90s, Sci-Fi/Horror
8
Movie about humanoid alien brother and sister stranded on Earth
5
Movie about a hero on a bike with a laser gun who saves a village from gangsters
7
80's alien movie: young boy finds and protects a glowing alien green rock which becomes his friend
4
Movie/Episode: Time travel story resolved by alien sneezing
5
Old B movie with shapeshifting alien