Looney Tunes episode in which a bird walks and hops, then disappears when passing behind a light pole

This is a scene I saw in a Looney Tunes episode somewhere between 2000 and 2010, although I'm not entirely sure in which animated series it was; I would like to believe it was The Sylvester & Tweety Mysteries, but I am not entirely sure.

Basically, there is a scene like this where you see the Minah Bird walk and hop in a city. A dog is following behind him (you see them from a side view). And when they get to a light pole, the Minah Bird disappears, and the dog wonders is confused because there's obviously nothing about the light pole itself.

I suppose that gag is recycled in the drawing below: 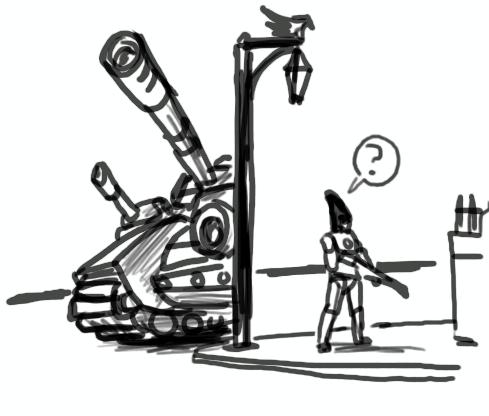 The way I remember it, that scene happened in some kind of city. They were walking on the pavement, the surroundings looked like buildings (I mean, it was the colours of cements, bricks, greyish or something like that, and there was no tree, at least none that I could remember).

The dog following the bird wasn't the kind that could talk, as far as I remember. He behaved like... a dog, I guess. I'm not even sure what he looked like anymore, though I think it wasn't Hector the Bulldog (maybe a dog that looked more like the Barnyard Dog, willoughby, or maybe a smaller dog like the Frisky Puppy).

The bird was a very minor character in that episode. I'd like to describe it as a cameo appearance, as he wasn't part of the story, just a bird passing by to confuse the dog.

I tried searching "looney tunes bird disappear behind light pole", which is what helped me find that the bird is actually named the "Minah Bird". But I coud not find anything about the scene I remember.

It is hard to prove a negative, but I have not been able to find an example of the Minah Bird behaving in exactly the way described in the question.

The Minah bird was introduced as a character in the Inki cartoon series:

These are rarely shown now due to the racist depiction of Inki, the African boy, but they can be found fairly easily on the web. None of them contain a scene of the type described. Indeed most of them take place in the jungle (and not in a city), the exception being "Inki at the Circus" which does have a dog as a main character, but otherwise doesn't match up with the question.

The Minah Bird did make cameo appearances in later cartoons;

Again, I didn't encounter the described scene in any of these. Probably the closest match was in A Mynah Problem in which Sylvester chases the bird around the zoo, and when they are in the roof-space of the reptile house there are a couple of occasions when the bird disappears and reappears behind the beams. This didn't involve a dog or light poles though.

So I can only conclude that either the scene did not actually involve the Minah Bird, or that my list of cameo appearances is not complete. I have not been able to find any other appearances though.

Not the answer you're looking for? Browse other questions tagged episode-identification looney-tunes or ask your own question.