I am looking for an isekai light novel with overpowered items

This story is set slightly into the future but there are not a lot of differences. He lives in his grandfather's house and finds a doorway of some kind. This doorway leads him to another world where he finds items that are overpowered with the help of a sort of game system. He levels up by fighting monsters and finds out that his world is not only populated with him and monsters. He also wears this sick red armor that kind of looks like lord Sauron's armor.

I believe you are looking for Isekai de Cheat Skill wo Te ni Shita Ore wa, Genjitsu Sekai wo mo Musou Suru ~Level Up wa Jinsei wo Kaeta~, or I Got a Cheat Ability in a Different World, and Became Extraordinary Even in the Real World. I'm basing this answer off of a manga I found with the same plot, that has a light novel of the same name.

In the first chapter of the manga we learn the main character's grandfather died and the house was left to the main character. He explores the house and finds a doorway to another world. The doorway connects to a house in the other world. when exploring the house he finds various weapons, one of which he uses when a monster attacks the house. A status screen then appears saying he leveled up from level 1 to 100, and all his stats increased from 1 to 1000.

Below is the cover for the manga i found, which shows the main character in armor. 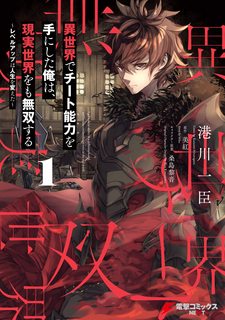 Not the answer you're looking for? Browse other questions tagged story-identification novel isekai or ask your own question.

5
Trying to find a space archeologist/explorer book I read once before, can't remember the name or author
9
Looking for a scifi novel with advanced pheromone technology
4
Movie about a kid with superpowers who fights monsters, has a hamster-like friend who the enemy makes fall into a pit and become a monster
6
Book Identification - Children's sci-fi book about videogame aliens
6
Kids TV show combining live action and animation, kids fighting monsters after entering a photo booth
5
LitRPG book with the main character “trapped” in VR MMO world, manages to re-invent tobacco as a crafting recipe, serves a “dark” god
3
Looking For A Specific Isekai Manga
4
Book about a boy testing a new VR game